The Spy Who Came In…

Adapted from the John le Carre novel of the same name, the first five minutes of Martin Ritt‘s The Spy Who Came in from the Cold will convince us that it’s not like any other ‘caper’ spy films, giving us melancholy piano and woodwind music hovering above the barbed Berlin Wall in the mid 60’s. Protagonist Alec Leamas (Richard Burton), an agent does a lot of waiting, needing coffee to stay up watching the border. The film lets us watch Alec and lets us into his head, only hearing his footsteps in the night. His conversations with soldiers aren’t racked up with tense music. In a few seconds, an Allied spy gets shot while trying to bike across the border. We see Alec for a half second as he watches his colleague die, but the film won’t let us see his eyes well up or glimmer in anger and vengeance.

Like any spy, Alec embarks on some method acting. Control pulls him away from Berlin back into London, is assigned to act like an alcoholic delinquent – I can hear some of you snarking that that’s not a stretch for Burton, but hold on. The goal is to make the Socialist agents in London think that he wants to defect, and he then plants false information that would implicate the higher powers of East Berlin to destroy each other. While working at a library that no one suspiciously visits, Alec meets a Communist woman named Nan Perry (Claire Bloom) and he grows fond of someone whose belief system is the target of his operation. I liked watching him challenge her. It shocked me to see an atheist character given a sympathetic, nuanced light in 1965, imagining that her character would be portrayed in a radically different way had this been a more American production.

The film also lets us into the more mundane parts of espionage life, letting us into tedious, unglamorous instructions by a head librarian which is subtly funny. Or detailed conversations between agents and double agents, Alec’s lies are a hazy prop compared to what’s really happening. He maneuvers his way within characters who refreshingly don’t look like movie stars.

I’m not sure if it’s the hair and make-up department who does the wonders here, but Oskar Werner, who plays Alec’s target Fiedler, has such a confident presence in the film compared to his wimpier turns in his collaborations with Francois Truffaut like Jules et Jim and Fahrenheit 451. he’s masculine yet subtle, commanding even for someone heading to a trap. Burton isn’t perfect in this movie. He can’t punch, and his last soliloquy in the end relies of his staccato delivery that might as well be his crutch. Other than that, this is his most subtle which makes it his career best in his movies that I’ve seen. It’s in his quietest moments when we can see him in his most vulnerable place, conveying the most emotion while just sitting there listening to another person. He deserves that Oscar nomination, showing us the human side of secret agents. 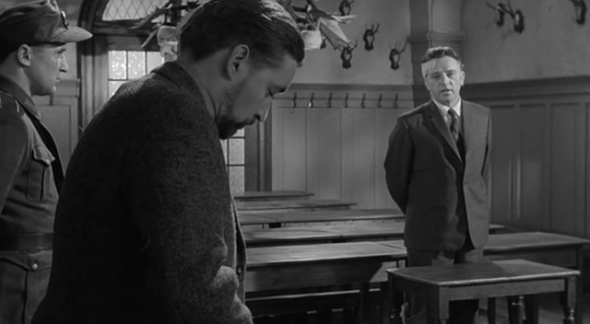 This entry was posted on April 2, 2011 by paolocase. It was filed under Movies and was tagged with 1965, Best Actor nominee, Claire Bloom, Espionage, John le Carre, Martin Ritt, Oskar Werner, Richard Burton.