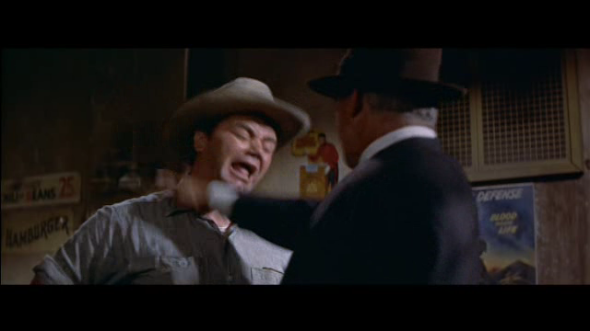 “I thought the tradition of the old West was hospitality.” O hale no, Spencer Tracy.

Instead of hoodwinking us into making us feel comfortable about violent acts (“The Searchers”) or outright lying to us (“Avatar”), “Bad Day at Black Rock” keeps on message. It’s pretty much the 1955 equivalent of ‘We’re assholes, man’ without any sugar-coating. This movie also doesn’t have the annoying speeches that other politically inclined movies do. The characters are just doing and saying what’s necessary to survive against their enemy.

Mysterious John J. MacReedy (Tracy) goes to Black Rock and realizes that the attitude of some inhabitants is as dry as the desert. The town is just as mysterious as MacReedy, and it’s that mysterious element that allows oppression to occur. Both MacReedy and the man he’s looking for, Komoko, didn’t know what wa sin store for them when they went to Black Rock. When MacReedy asks Reno Smith (Robert Ryan) what happened to Komoko, Smith answers that the government shipped Komoko to a relocation camp, which couldn’t have been in the city. I’m not saying that small towns are racist. Instead it’s the population’s instinct to tuck horrific activities where no one can see them, and whoever’s the last in the exchange of hands would have to wash those horrors quietly.

Like the other movies in mentioned in this post, this movie doesn’t really paint any racial group with the same brush. Some white characters defend the oppressed minority as much as a handful of white ones oppress them. Smith could have relied on MacReedy to keep their secret if they had some unspoken bond. But no, MacReedy’s an outsider and could even have some authority beyond the small town of Black Rock, therefore the secret, as well as MacReedy, can’t possibly get out.

MacReedy finds out that Komoko, is dead. SPOILER, so is Komoko’s son, the man who saved MacReedy’s life.  Apparently MacReedy should read as part Japanese – he kinds does look like Cotton Hill in this movie, after all, even if I don’t buy it. The film defending the Japanese is bittersweet in a way that it
doesn’t visually represent them and are not allowed to speak for themselves. 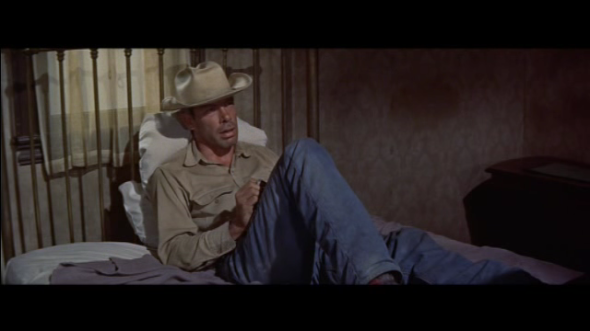 I also wanna say that this movie years ago was my introduction to the star-studded cast (Tracy, Ryan, Ernest Borgnine, Lee Marvin). And I kinda have this thing about Lee Marvin, like what is wrong with me? This movie made us expect cowboys in plain clothes, and thankfully we got people who talk and think like cowboys. And who better to play cowboys than these four.

This entry was posted on April 6, 2010 by paolocase. It was filed under Movies and was tagged with 1955, best movie ever, Ernest Borgnine, Japan, Robert Ryan, Spencer Tracy, western, white guilt.