Black Swan fits director Darren Aronofksy’s other work, with an obsession with the body and performance, close-ups of Nina’s (Natalie Portman) feet and ballet flats being warmed up. There’s CGI, grainy digital photography, and uncompromising close-ups of her face. Like other Aronofsky’s protagonists, she embraces quick success without anticipating her antagonists, like rival Lily (Mila Kunis), choreographer Thomas (Vincent Cassel) Nina’s mother Erica (Barbara Hershey), and all the voices in her head.

The actresses also do great work here. Portman interestingly interprets her character as a virginal girl without confidence, panting at every step, obeying Aronofsky’s pendulum swing vision of her character. It’s probably the first time I’ve seen Portman attack cruelty in its basic form, scratching and clawing away at herself, as if a demon is possessing her. Kunis is smooth and elastic as she dances and seduces everyone, deserving the Marcello Mastroianni award she got this past week.

The inconsistent characters, are my big complaint. I don’t mean the other dancers’ double pronged admiration and bitchitude, from what I heard normally directed to women from women. I’m talking about malleable Nina, mentally unready to become Swan Queen, despite having a ‘flash’ of it in her. Or how the ‘prick’ Thomas still has his job. We are perceiving them through Nina’s warped state of mind, but I’m not sure if that’s justifiable enough. The film’s ending feels invigorating, but still, 3/5.

p.s. Just realized that the douche-y blonde guy from Hot Tub Time Machine is one of Nina’s dancing partners.

I know this Slavic girl in college whom I like making fun of behind her back. I don’t know if it’s more  insulting that everyone thought she was stupid or that I didn’t see her as stupid but instead, a person with a tragically clinical view of academia. We had a conversation on the bus once about David Cronenberg’s Eastern Promises, a movie that just came out at the TIFF 2007 and the first movie from that crop to be released in theatres. She said the rapes made her uncomfortable, for reasons more basic than what I can deduce from other things I know about her. Once in a while she reveals a point of vulnerability and closes back up again, in a way telling me either that I’ll never find out her secret or that she doesn’t have a wound in the first place.

Roger Ebert and Carina Chocano separately compared this movie to The Godfather, and they’re right in that both movies are about the second generation of gangsters and not the first, a typical focus point in post-classical gangster films. It’s been said about The Godfather that it’s about the sons or the daughters paying for their father’s sins, despite of how much the parents try to shield them, or how much the children try to legitimize themselves, and no matter how much the latter presents themselves as products of nurture, or society, instead of nature, of family. In Eastern Promises, however, the children ‘stray from the path I’ve set out for [them],’ as the patriarch Semyon says in dismay. The half-English Anna Ivanova (Naomi Watts) will not adopt her Uncle Stefan’s negrophobic, anti-miscegenation viewpoints. Semyon’s son, Kirill (Vincent Cassel) is a hotheaded SPOILER, closeted homosexual, doing away with those who whisper that truth. Kirill’s driver/undertaker Nikolai (Viggo Mortensen) is a clawing his way to the top of the Russian mafia. The movie never lets us conclusively know how their different rebellions will help or hinder their characters, especially with Nikolai and his double life.

Speaking of double lives, the homoeroticism in the film, as shown specifically through Nikolai makes me think that Kirill couldn’t help it. Cronenberg depicts the gangster lifestyle itself  as homoerotic. Kirill orders Nikolai to have sex with one of the prostitutes to prove his heterosexuality. The elders examine Nikolai and his symbolic tattoos, standing in front of them wearing only his underwear. The bathhouse death match. Kirill and Nikolai’s faces so close to each other, reminiscent of Viggo’s closeness to William Hurt in Cronenberg’s earlier work A History of Violence. I wonder if Nikolai is bisexual, or using himself to get to Kirill’s confidence, or if it’s compassion bursting through the hard surface he has to keep up for his job. It’s a fragmented interpretation of the character that doesn’t answer all the questions, and that actually makes him a more memorable character. 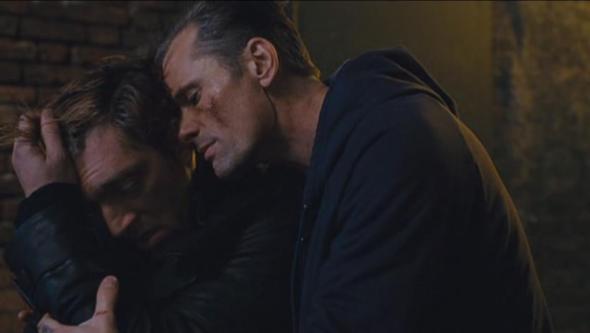 Yes, the movie had rapes and babies and a death match at the bathhouse, but there’s something anticlimactic about the movie, especially in the film’s denouement. And most of this is gonna sound like I’m shitting on Kirill/Vincent Cassel here. As a character who’s behind Semyon’s shadow, he’d be resentful and would hesitate in acting out his father’s orders. What does it say about me if I’m unconvinced that Kirill wouldn’t readily do to the baby Christine what Semyon has told him to do, or that I expected Christine to have a harder time than she did? Or that the sexual tension between Nikolai and Anna should have been left alone where it was before the last scenes? Or that I expected absolute evil from Nikolai?