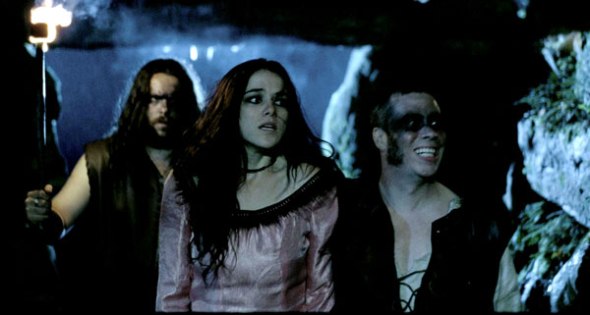 The movie opens with a gritty, grubby scene of the Viking princess Evelyn-ia (Tiio Horn) being kidnapped. A few exchanges of cheesy lines about bravery follow just before they pull the curtain down. It’s a tragicomic look but not the definitive story about Medieval live action role-playing that just so happens in Canada. The switch between fantasy and reality is seamless after that first scene I just described, and it becomes emotionally poignant as some players take the game too far.

Erik juggles handling his ailing father and Evelyn, his very flighty girlfriend. He becomes paranoid about Evelyn being the sole female amidst Medieval nerds on steroids, so he naturally goes up to the rural area where the role-playing happens. He enters the “realm” in a t-shirt and jeans, breaking everyone’s willing suspension of disbelief. He then gives Evelyn a really unglamorous speech about being patient.

But then she gets to be on his side since he shows her and a few other players how unglamorous the past is, despite the nostalgia they try to attach to it. Women weren’t respected, the infrastructure was shit, people didn’t clean up after themselves, too many people died. The latter also effects this masculine bravery that was supposedly innate within the Vikings and the Celts, etc. And those aspect of early civilizations linger within this replica.

Evelyn is the centre of the drama, as both Erik and Shaman Murtagh (the familiar looking Trevor Hayes) woo her. The flirtation between Evelyn and Murtagh is well shot, snowflakes falling on Evelyn as they make out around saturated fall and winter foliage in the Canadian forests? Breathtaking. I can only imagine how Medieval role players can’t even think about the real world because they’ve retreated within nature. Drama and role-playing always gets a boost from a great mise-en-scene. Everything else is captured in perma-dawn, and there are inconsistencies – it would get darker or brighter at certain times within the night scenes.

Going back to Evelyn, she’s both Helena and Cressida on how Shakespeare understands these characters. As a Helena, she’s both the woman who launched a thousand ships although Evelyn’s status as a Viking Princess is constantly questioned. One of the other Celts tells Murtagh that she’s a slut, while one of the female tour guides mock the title that’s given to Evelyn. As a Cressida, her defiance ironically makes her a strumpet. She is forced to choose between fantasy and reality, and some might negate her for not being able to choose. These are aspects of her life and she shouldn’t have to choose between Murtagh pushing her around or Erik tying her to domesticity.

Since there’s a Helena/Cressida in this narrative, there’s also a Troilus. I may have already spoiled the ending by saying that. I’ll go further by saying that the movie ends like “The Departed.” Some of the audience actually got a laugh at the ending. Hours after I saw the movie I started questioning whether anything in the movie had to happen if everybody just calmed down. But then that’s what tragedy is in the earliest sense, and the impulse that drives humans in more violent times also lingers in modern characters.