…how cringe-inducing Spider-Man 3 was, as Peter Parker (Tobey Maguire) strut around the streets of Gotham City looking like Hipster Hitler. The girls he hits on know better, but the fictional superhero has still become less human. Peter becomes his own super villain,  less sympathetic than the son (James Franco) avenging his father’s (Willem Dafoe) death or a new journalistic photographer (Topher Grace) younger than Peter. Why are all these people dudes?

I understand you were trying to be zeitgeist-y, with references to emo culture or the The Pick-Up Artist or to more serious, generational anxieties. Two of the villains’ names are Venom and Sandman (Thomas Haden Church), both names could be read as Middle Eastern references. Or that there were many buildings falling down in this movie. Six years after 9/11, it didn’t seem too shocking or too soon, but I already mentioned this bloated, rough film’s other flaws.

Mikey Carver (Elijah Wood) fools around in his basement with Wendy Hood (Christina Ricci), but he hears footsteps approaching. Like young people, they expected to be told that this behaviour isn’t correct, as her father Ben (Kevin Kline) does publicly. We the audience have expectations too, that punishment follows sin, and the sinners will all be drowning in tears in the end of every exposure of wrongdoing. But what if the punishers, in this case the parents, take part in the same kind of behaviour? That sort of is the problem here in New Canaan, Connecticut in 1973.

I also just realized days after watching this that the characters also like punishing each other. Although punishment isn’t their prime motives nor they have fully decided to do this for the 48 hours that the film portrays. Mikey’s mom Janey (Sigourney Weaver), irritated by her workaholic husband, has an affair with Ben, which is how the latter fortunately finds the two kids fooling around in the Carver basement. Ben’s wife Elena (Joan Allen) slowly finds out about this affair, and forcibly joins her and Ben to a ‘key party’ – where the husbands put their keys in a bowl and the wives pick a key, their husband’s or not. Yes, some of those actions are vengeful, but their unreliable spouses adds to these characters’ loneliness.

Period object time – The Jesus Christ Superstar poster on the train from New York City to New Canaan, the fashions and pastor’s hair as we hear Harry Nilsson in the background, the action figure of the American soldier whose genitals the Viet Cong has stolen, Ben’s son (Tobey Maguire) reading the Fantastic Four (?). Your turn.

Is this Kevin Kline’s movie? Joan Allen and the others steal the movie from him but the water-bed is his. 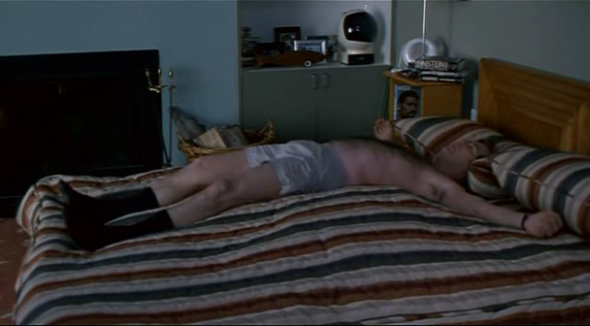 Ang Lee likes nature, from the torrential rain in the countryside hills in Sense and Sensibility to the bamboo trees in Crouching Tiger, Hidden Dragon. Here in this film we see Ben leave Janey’s postmodern house to his own by walking through some nicely arranged wooded areas that start from her backyard. When Ben busts Wendy, they share the same route and he gives her advice. The area’s multi-purpose, where Janey’s younger son blows up his toys for God knows why, sexual repression or aggression? Lee chooses to adapt a film with a suburban setting, since it’s where man meets nature and both compromise, nature is where humans hide. The only person who can’t really reconnect is Elena, who follows Wendy’s example by biking through the off-roads of the suburbs. She deviates by shoplifting in the pharmacy like her daughter and gets caught, making a big scene. 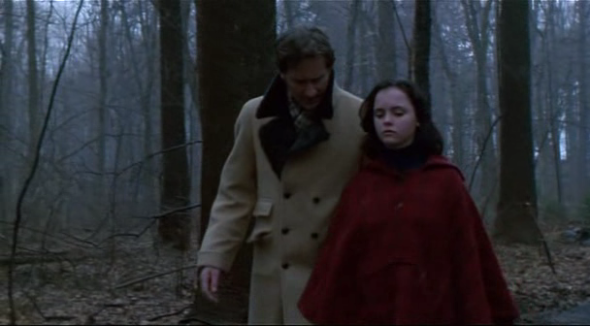 The film’s title The Ice Storm is also a natural phenomenon, a thing greeted with warning by the weather specialists on TV, making it difficult for cars and trains to go around, an indirect challenge to the characters. Mikey sees it another way, enjoying the harshness and the beauty it produces. For a while his loneliness, as well as the other characters, isn’t as bad. The storm gives us a tragic end, and we can see those factors as something only God would inflict on the film’s characters. It doesn’t feel like anything will change, and no, I’m not saying key parties will still happen in this town. The film actually makes us feel like this tragedy is as bombastic as other directors might convey through their possible versions of the film. Lee’s tone is constant, solid and makes us feel as if the dysfunctional Hood family will be together after the event.