…how cringe-inducing Spider-Man 3 was, as Peter Parker (Tobey Maguire) strut around the streets of Gotham City looking like Hipster Hitler. The girls he hits on know better, but the fictional superhero has still become less human. Peter becomes his own super villain,  less sympathetic than the son (James Franco) avenging his father’s (Willem Dafoe) death or a new journalistic photographer (Topher Grace) younger than Peter. Why are all these people dudes?

I understand you were trying to be zeitgeist-y, with references to emo culture or the The Pick-Up Artist or to more serious, generational anxieties. Two of the villains’ names are Venom and Sandman (Thomas Haden Church), both names could be read as Middle Eastern references. Or that there were many buildings falling down in this movie. Six years after 9/11, it didn’t seem too shocking or too soon, but I already mentioned this bloated, rough film’s other flaws.

Welcome to family friendly Ojai, California, where the sun always shines on the auburn hair of a snarky girl named Olive Penderghast (Emma Stone) who everyone suddenly thinks is a trollope. Director Will Gluck and screenwriter Bert V. Royal know that Easy A is telling a story told before, and with sharper scripts. The film is full of references of cellphone culture and slightly grainy webcams and grainier clips of John Hughes films and a homosexual rendering of Huckleberry Finn’s interracial friendship. Speaking of old, hallowed American narratives, Olive is our Hester Prynne, a fictional character whose archaic treatment disgusts her English teacher (Thomas Haden Church) but we and the teenagers know that a woman’s purity – or appearance of purity – is still placed on high regard. 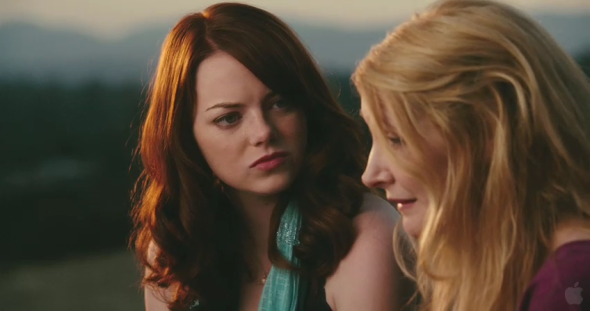 This film has the best gags I’ve seen in a while, like one involving a Natasha Bedingfield song and another one about Olive adopted brother. However, it’s crueller than your average teen flick. Stone’s husky voice still sounds more mature, which slightly takes off the willing suspension of disbelief. And I spent the first act of the film wishing I saw her with her parents (Patricia Clarkson and Stanley Tucci) simply because her comic chemistry with them is that good. Stone also has believable rapport with supporting characters like her enemy Marianne (Amanda Bynes) who surprises us with her vulnerability, Brandon (Dan Byrd) who’s confused about his sexuality, a guidance counselor who doesn’t listen to her (Lisa Kudrow) and Woodchuck Todd (Penn Badgely) who balances good looks with wearing goofy costumes. A silver lining on being ostracized is an assumed altruism that she adapts like Hester and that the other characters secretly relate to her when they’re down.

Despite a few hurdles, Stone owns this movie. Her world is one with bullying, obsession on teenage sexuality and where teenagers can frighteningly perform that sexuality as Olive does because of peer pressure. Olive tells her webcam viewers that books and movies can’t put across ‘how shitty it feels to be an outcast.’ Yet she makes us know how it feels. The film doesn’t judge her. Yes, I can’t help but feel slightly old while watching the movie, but for the first time in a while, I watched a teen movie that has enough spark and humour and didn’t make me feel like a parent. 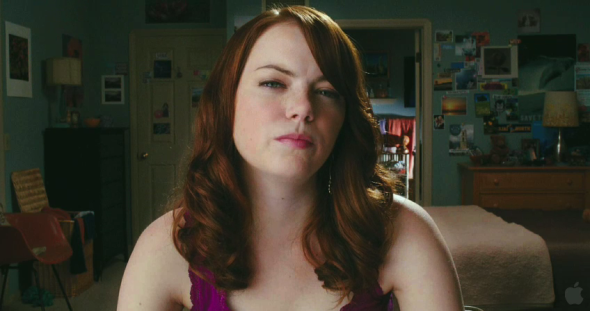