Jayne Wisener‘s Johanna is probably my reason if I was ever gonna rewatch Tim Burton‘s Sweeney Todd: The Demon Barber of Fleet Street. Wisener wasn’t the next Kate Winslet, but she’s well-directed here no matter what her acting capabilities are. There’s something in the way she moves her head. June Thomas from Slate Magazine hasn’t been too kind on her rendition of the Sondheim-penned ‘Green Finch and Linnet Bird,’ but it’s my favourite rendition of the song, while most of the other renditions I’ve heard sing it with too much operatic force. Maybe I’m being cruel and that the other singers need to boom the song to the back of the audience, but I like Wisener’s softness.

There’s also something in the way she’s photographed here. High angle shot from the view of the birds. Through the window. My favourite POV of her is through the peep-hole from where the corrupt judge looks (Alan Rickman). The black spaces on the screen like that of silent cinema.

Should I watch a film just for two-minute intervals of a character watered down from the original source material and listen to her sing maybe twice? I don’t know why the film never fully connected to me the first time. Maybe I got bored by the ‘arterial spray?’ Or Helena Bonham Carter didn’t project her voice enough? Otherwise the film does look better on video. The thing about Sweeney Todd, and I can say this about at least one movie released every year, is that it’s either great in memory or in parts. There’s a reason why I was bored through half of the film, as if the scenes felt like the could have been played out better. 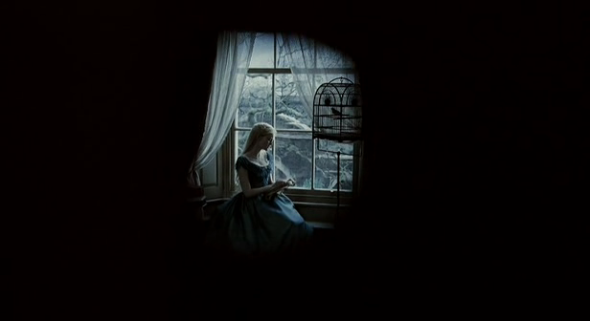 And those who know me will know that despite of 50-ish movies that I love – list coming up in never – I would rather get punched in the gut than watch a good or ok movie again.

There was also a small group of college-age kids near the front of the theatre who laughed at every other line of ‘A Little Priest.’ Like, we get it. You’re the biggest Sondheim fan ever. You’re so smart, you get all the jokes. I hated the Cumberland then. I said that I regretted not watching The Savages instead, but I’m not sure if that’s still true.

I might be going job hunting with my sister this afternoon. This movie’s gonna be at the Bell Lightbox at 9:30. It’s a Wonderful Life is playing at the Bloor. Black Christmas is playing at the Underground. I have time to think this through.

The Mirvish company hosted An Evening With Stephen Sondheim at the Princess of Wales Theatre. He was introduced by Des McAnuff, who among many things, said something really nice about “Sweeney Todd.” Something along the lines of how effectively emotive or haunting the Johanna song is. I can’t remember for sure.

Sondheim’s not an island. McAnuff in his introduction talked about the composer’s trusty collaborations with his longtime collaborator/choreographer/director Jerome Robbins, Leonard Bernstein, Arthur Laurents, and many more later in his career. Sondheim’s let us in that Robbins scared him but the final results of working with him were worth it.

He’s very open about his flaws even within his well-loved works. He talked about how the words of “Forum” don’t match well with the music, and accuses himself of creating high music for a low comedy. As he said, it takes as much work to write a good song but a wrong song as it it to write the right one. He also talked about the enormous help that his mentor/surrogate father Oscar Hammerstein II has given him. Hammerstein helped especially on the first musical he penned when he was 15, which is, as he remembers Hammersten saying, is the worst thing the mentor has ever read.

He also talked about the mentor as an experimental composer in capturing the vernacular in the songs. He said that Hammerstein was better in mirroring the colloquialism in period pieces than with the contemporary-set musicals. That said from the man who brought us the lyrics of “West Side Story,” and I know. I’m actually one of the few people who think that the Jets and the Sharks are tough. Because this is often my angle in the movies I see, and that it’s a topic I can’t really bring up in person, but accents aside, there’s little difference between how the two groups talk. Which is good and that the differences between they aren’t overplayed. Besides, they’re all in Hell’s Kitchen, right? This led to critic Robert Cushman talking about theatre evolving to mimic real-life conversation. Sondheim corrected him about the limitations of theatre mirroring naturalism, that the audience makes a pact as they go into the theatre to believe mostly what the stage delivers. That no one really breaks out into song. Well, not really. The passive aggressiveness was fun to watch.

I was such an embarrassing n00b. The only knowledge I have of him are about two film adaptations of his work. He’s alive? That’s what he looks like? He’s in his 80‘s? And when “Into the Woods” was mentioned, a musical that I’ve never heard, clap away. My friend must have been embarrassed, me being such a poseur like that.

I wasn’t looking at my watch the entire time, but the last ten or twenty minutes of the conversation involved question cards either from probably mailed or e-mailed in. Sondheim was asked about the popularity of the song ‘Send in the Clowns,’ probably one of the last songs from a musical to enter the Billboard charts. It took two years and at least four singers who switched hands in singing the song as their own. Apparently those singers had different interpretations. Frank Sinatra’s (Belated Happy Birthday, by the way!) was ‘You go with a chick. It doesn’t work out. Send in the clowns.’

I can’t remember the question, but the differences between the stage and film of “West Side Story” – He wrote that? That just made him more approachable, not that listening to him talk wasn’t approachable enough, which it is – was discussed. The Broadway recordings always have the song ‘America’ only sung by female cast members while I had to refresh my memory and that the film version makes it a boys vs. girls song. Sondheim clarified that Robbins insisted that the stage version have the song only be sung and danced by girls. He also joked, hopefully, that Robbins had death rights to the choreography that will make future stage productions of “West Side Story” be unchanged. And you know what, Robbins is right.

Another one of the last few questions was about “Sweeney Todd,” the more Sondheimian musical in my understanding of the man because of the elegant words and intricate structures of the songs. Although Burton’s version is better on video, by the way. I might see it in the theatres again. The question was about a translation on “Sweeney Todd” in Korean, and how he felt about foreign translations. He said that he only knew rudimentary French, German, Italian, Russian and Spanish. Four out of those five. He said he was grateful that other countries perform his work. The people performing his work send a rough translation of the translation, and if it’s in the spirit of the original, it’s ok. Can you imagine how ‘a politician cake would run’ in Korean, though, or what Asian Angela Lansbury might look like?

Oh, and if I had a flask, I would have taken a swing every time either McAnuff, Cushmann and even Sondheim said ‘Shakespeare.’ In the end, the night taught me a lot about the intelligent man, insightful about the specifics and science of his craft, how characters work with their songs and within the body of a musical.