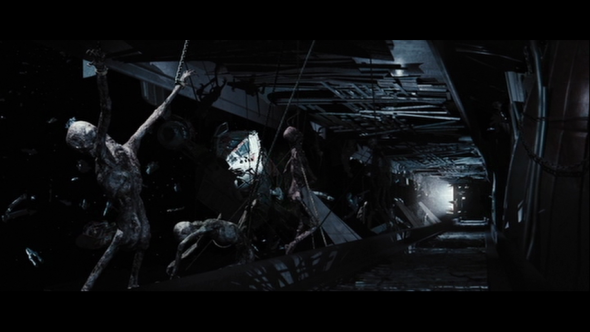 It’s surprising that a “Buffy” fan like me – I’ve seen and love the movie too – wouldn’t catch “Firefly,” but I had my stupidity to blame. I wanted a “Buffy” 2.0 – so why didn’t I read “Fray?” – and it seemed too much of an outlandish concept for me. But Nathaniel, probably the only person guiding me through my schizophrenic viewing habits, chose “Firefly’s” movie adaptation for his best shot series, keeping in mind that creator/writer/director Whedon’s having a big year this year. So why not? Above is a shot of carnage fitting for the movie’s ‘space western’ genre mash-up and that although Joss Whedon isn’t on top to direct Blood Meridien but he should at least be in consideration.

This experience is making me regret that I didn’t watch the series, the logical reason should be Whedon’s sharp writing and I suppose it’s nice to see futuristic cowboys but it’s really because of the characters and casting, including Alan Tudyk, David Krumholtz and Sarah Paulson. Specifically, of Adam Baldwin of Full Metal Jacket fame. I wouldn’t say that this part of the movie’s premise is ludicrous, and that his character Jayne butts heads with the titular Serenity‘s Captain Malcolm (Nathan Fillion) a lot and wants to kill the mysterious River Tam (Summer Glau). But like come on guys, his tight, short-sleeved shirts makes me think that the show should have given him a love interest. Things would have totally been different if I was on that ‘boat.’ Looking at his iMDb “Firefly” isn’t the only show I should watch for him. Apparently he was in “Angel” too and fuck do I have to watch “Chuck” now too? What kind of fan am I?

The best lines and situations saved for Malcolm, or Mal for short (Why isn’t Fillion, this movie’s star, getting the Jeremy Renner roles? The guys look alike but he’s taller yet yes, more intentionally awkward). And there are some good shots of him being framed by the movie’s well-done mix of multicultural sci-fi punk ethos, contrasting yet perfectly complementing his character as this old school masculine gunslinger. Above is him moving a fan to see what River is up to and below is him being irreverent, mocking Buddha – one of the religions and ideals that he as a character questions – for his love interest Inara’s guilty pleasure. Kudos to the movie’s art director Daniel T. Dorrance and costume designer Ruth Carter for this awesomeness.

But the movie’s most visually compelling character is River, who only gets into and stays in the boat because she’s the younger sister of one of the newer crew members (Sean Maher) and because she’s psychic. She looks like a friend of mine here in Toronto who also blogs about movies, actually. My best shot actually involves the movie’s intricate opening sequence, a series of scenes that would get novices like me confused as to what the movie is about. There are wide shots of different planets followed by a teacher explaining ‘the verse’ in an outdoor elementary school – thank God the future has smaller class sizes, am I right or am I right? – which turns out to be a dream sequence, Matrix style. Her brother helps her escape her almost permanent comatose state, which is actually hologram-recorded by Chiwetel Ejiofor’s character, Javert looking at his Valjean and waify Cosette and trying to find out where they could be hiding. 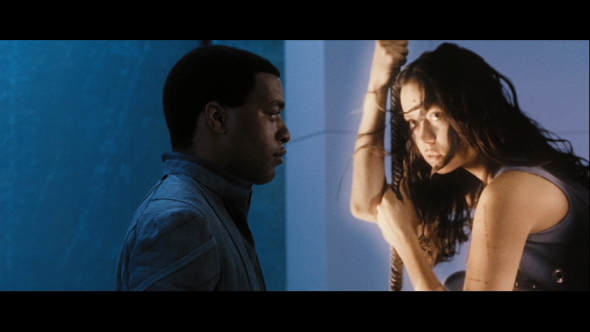 But the fun of watching her doesn’t stop there. She has two kinds of entrances, one where her leg(s) and the seam of her flowing dress come into the shot and one where the camera zooms or shock cuts into her perma-startled face. She also climbs up the ceiling to hide sometimes. And the one below? Bad. Ass.

My review of the movie has been up at ANOMALOUS MATERIAL since yesterday. My little piece about the same movie will also be out in Yourkloset in a week’s time and I will include the link when the article goes live.

But really, what difference does Martha Marcy May Marlene – Courtney Stodden’s favourite movie – have from “Dynasty?” Sarah Paulson and Hugh Dancy are everyone else and Elizabeth Olsen is Joan Collins, coming back from a binge of something we don’t want to know, inflicting herself into her family, being crazy as hell! Best. Photo shoot. Ever. Of course it’s so obvious that I haven’t really seen Dynasty apart from the occasional YouTube clip.

‘Martha/ Marcy May/Marlene Lewis (Olsen) is an interesting character because I know why I’m not in a cult. I want to know why she is and we never really get a sense of how she gets pushed into that edge. Is this off-screen Aunt Dora who she has lived with that terrible? Did she not grow up without TV or news? Why is she so co-dependent? So many questions and yes it’s as scary as anything you’ve seen this past Halloween month.