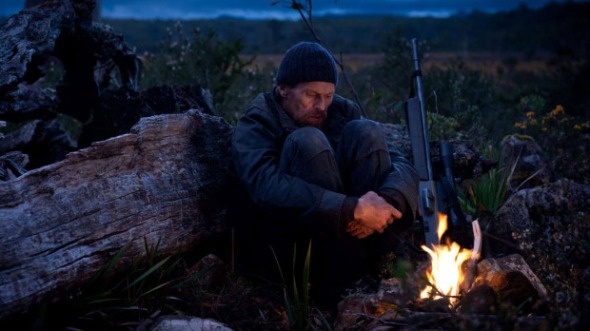 The Hunter, based on director Julia Leigh‘s novel, shows us an Australia that isn’t like the desert-like outback that we’re not used to. Here we have Tasmania’s vast greenery, hiding himself among trees, silver like rock formations and caves. It’s a visual work although it has more to do with what’s in front of the camera instead of how director Daniel Nettheim frames it. Most of the movie is comprised by these sequences where Willem Dafoe‘s titular character, Martin David has two-week stints searching for a Tasmanian tiger, a species thought of as extinct since the 1930’s, because of a toxin that it’s supposed to have. This forest and the town near it are contentious places.  Martin poses as a University professor and in a way he is, the way he walks through the area makes him seem more like a civilized, thorough researcher as opposed to a ‘hunter,’ who sees the animal to feed either his survival or sadism. Outside the forest, his new life is laced with sections of contrivances. He has inadvertently allied himself with the environmentalists with whom he’s living and angering the townsfolk who depend on logging for their economy. One of those environmentalists is his temporary landlady (Frances O’Connor), a woman recovering from a prescription drug addiction. He becomes a de facto partner to her as well as a detective, trying to discover what has happened to her husband who is also missing in the forest. While watching this I’m appreciating Dafoe’s subtle performance, a departure from the crazy roles that he’s known for in mainstream movies. And I understand that Martin is enthusiastically taking on his multiple roles within his new society, but these new-found connections feel like a reach. Not even the climactic ending, great as it is, can make me forget the falsified tensions that came before it. Image via eone. 3/5. 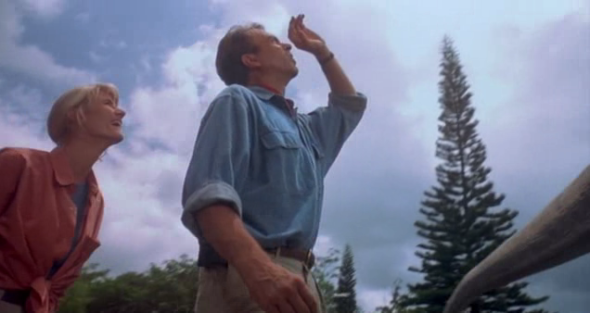 I saw Steven Spielberg‘s Jurassic Park for the second time as part of the Toronto Underground Cinema’s first anniversary celebration last Sunday. They celebrated by showing the first twenty minutes about a documentary about their cinema, which featured my ass. That day was also James Mason’s birthday. This is important because Sam Neill looks like James Mason. 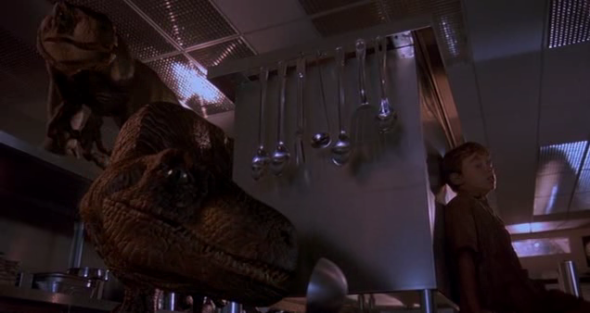 Above is Sam Neill with the tail of a CGI dinosaur. Half of the dinosaurs in this movie are real, the rest, excluding the first Brontosaurus, only look real. Correct me, but 90’s was one of those eras where if you wanted a dinosaur, a monster or a natural disaster on-screen, you had to make it and not draw it. 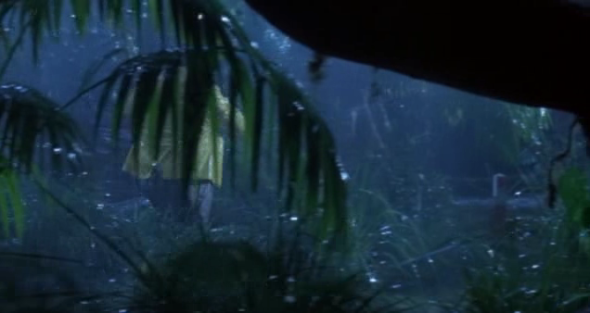 Dennis (Wayne Knight) has a snake-life face. He is hateful and is frustrated by Dr. John Hammond’s (Richard Attenborough) condescendingly low wages. Even if the latter pushes his employees, his intentions are good. He shuts down all the security systems and runs away from the fortress-like abbey Jurassic Park laboratories to smuggle some priceless Jurassic DNA out of the island, angering Hammond who knows nothing about Dennis’ foul scheme. Dennis runs through the poisonous forests, wearing an alluring yellow raincoat, gasping at any animal he might cross. Dennis tries to return to the fortress, only to be eaten by a dinosaur. 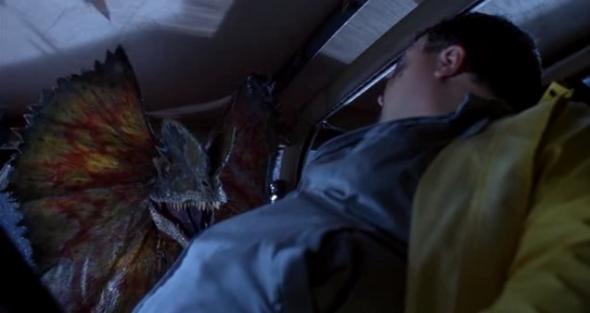