Five of the movie couples here will appear ad nauseam in my other lists. I’m really worried and sorry about that, being derivative and all. I just have a compulsion to make these lists. Then in like, three days, I’ll tell you what I really think of the new Harry Potter movie. Not on this list.

Noah Baumbach creates two characters so real and on the surface, kinda boring. Florence and Greenberg (Greta Gerwig and Ben Stiller) are half a generation apart, and they come to blows sometimes with that. Florence sometimes talks and acts with irony that she doesn’t make a good impression on Greenberg. He’s an impulsive slacker but he blows his lid when her immature side pops up. Nonetheless they’re there for each other in times of need, belonging in Noah Baumbach’s world of under-dramatic characters. Thankfully, they don’t need speeches to reconcile neither!

The hero of Scott Pilgrim vs. the World (Michael Cera) and his heart eventually sets itself for the almost unattainable Ramona (Mary Elizabeth Winstead), but I really thought Scott and Knives (Ellen Wong) could have worked it out. They’d go to the arcade or Sonic Boom and  it doesn’t even feel like she’s dragging him. Then peer pressure kicks in, understandably because it isn’t cool for a twenty year old to date high school girls. They end their relationship with Knives complementing Scott’s hair, a perfect Annie Hall ending. They can be good friends after all. 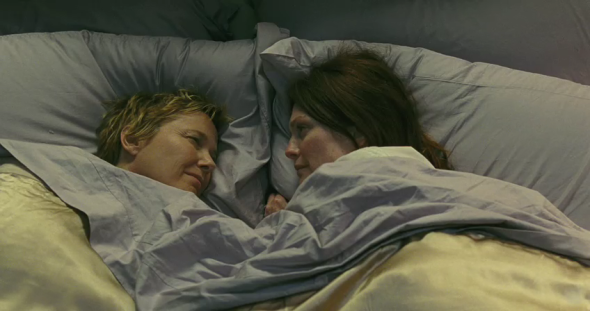 The obligatory LGBT couple could have either been Cherie and Joan, Eames and Arthur (I can see you write the gay fan fiction now, LJ) or the ployamorous relationships in Heartbeats or FUBAR, but it goes to Nic and Jules (Annette Bening and Julianne Moore) from the Kids are All Right. Marriage is hard, as Jules says. Despite some flaws in the film, writer/director Lisa Cholodenko creates people, not symbolic entities, who have their own quirks and desires. Sleeping under a big comforter, ridiculous in LA standards, you can feel them snuggle in. Please adopt me!

They’re on this list because I felt really bad omitting Rabbit Hole on my top ten – the ‘revelation scene’ was kinda weird – but Becca and Howie (Nicole Kidman and Aaron Eckhart) make for a great couple. Yes, most of the film equally captures Becca’s relationship with her family, and Howie’s questionable friendships, but underneath that grief, anger and resentment is repressed passion and a will to reintroduce themselves into the Yonkers community where they normally belong. They help each other move on despite of the tragedy that kills the other marriages in the movie. 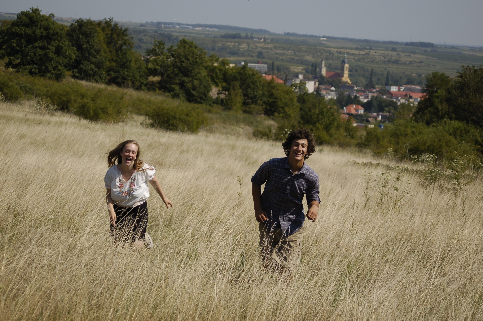 Representing puppy love are Lina and Leco from Modra, where the first time actors improvise their way into Lina’s titular home town in Slovakia. Instead of barraging each other with questions, they walk around the bucolic town. Leco jumps on top of Lina at least once. They find out the nice and not so nice things about them. Will this summer decide if they’re gonna stay together, even if the town elders bet that they will? This is showing at the Lightbox as the better parts of the apparently stupid best Canadian movie list. This movie’s so cool and obscure, it doesn’t have an IMDb page!

Some of you might think that the least conflicted part of Easy A is Olive (Emma Stone) getting swept off her feet by a Prince Woodchuck (Penn Badgely), which is true. So we’ll go for the bets parents ever (Patricia Clarkson and Stanley Tucci), and I remind myself that they were part of the me generation, as the mother intimately reveals, which is why they can give such great advice for their own daughter coming to terms with her sexuality. Again, Clarkson and Tucci have such great chemistry and humour, making jokes when they’re actually worried about their children’s well-being.

Here comes another odd, unattractive couple from another indie movie. It’s mean, I know. Jack and Connie (Philip Seymour Hoffman and Amy Ryan) in Jack Goes Boating decide to embark on love despite of cynicism they receive from their married friends. They’re learning the physical taps of love, not lust, as Connie tells him to overpower her without sound like she’s over-directing. In the end, while Fleet Foxes’ pastoral folk music is playing strangely on a New York City backdrop, the only thing more fitting is to see these two put their arms on each other’s shoulders.

I’d be sadistic enough if I put Barney Panofsky (Paul Giamatti) on this list with either of his first two wives (Rachelle LeFevre and Minnie Driver), but author Mordecai Richler is sadistic enough to let Barney meet his third wife Miriam (Rosamund Pike) in his first wedding. In Barney’s Version, he tries to work it out with this Myrna Loy-esque image of perfection they try to work it out and do for almost twenty years, then he cheats on her. He tries to win her back, prankster that he is, by giving her new husband (Bruce Greenwood) a heart attack. But they’ve remained good friends.

‘You’re used to getting women drunk, aren’t you?’ Carlos and Madga (Edgar Ramirez and Nora von Waldstatten) are the definition of the sexy couple. In their first meeting, both test each other and that goes for the rest of their relationship when they have children and both have to go on terrorist missions. Nonetheless, they get on each other’s nerves, she does everything for him while he calls her a ‘petit bourgeoisie’ to his mistress. Like most of the women in the miniseries, she’s attracted to the man who makes things explode, but she can’t love the man who loves himself.

The reason this list even exists is because of Micky Ward and Charlene (Mark Wahlberg and Amy Adams) from The Fighter. From their first date you can hear the rhythm of their banter already, might as well sounding like a couple twice their age. Micky admits later that they’re going in a nice part of town to hide, but only will he show this uptown side of his with a girl he really trusts. Director David O. Russell helps create that picture, showing Micky’s new support system as both, with little good reputation under their names, try something new and something with a great payoff.

Director Nigel Cole’s Made in Dagenham owes John de Borman’s creamy, pastel cinematography and balanced lighting that eases the transition from the fictional film to the 1960’s newsreel-like footage in both colour and black and white.

The first scene shows protagonist Rita O’Grady (Sally Hawkins) riding a bicycle to her job at the Ford factory in Dagenham, England. I remember those bicycle scenes when an American senior at Ford threatens labour minister Barbara Castle (Miranda Richardson) to withdraw, I recall 40,000 jobs that Ford gives to the United Kingdom. The only character I remember having a car is upper-class Lisa Hopkins (Rosamund Pike). Rita’s coworker Brenda (Andrea Riseborough) also as a quick scene in a Ford, although the car’s ownership isn’t explicitly revealed. I assumed that the company at the time wouldn’t give cars to their workers either for free or for cheaper like they would in Detroit. The company has thus treated the British more as labourers than consumers, and I wonder whether Barbara has caught into this. That or the English and just weird and prefer bikes. The cars don’t fit within the housing apartments in the London suburb anyway.

Hawkins, Riseborough and the other actresses make for good activists. I expect some of the audience to wonder how a meek wife like Hawkins’ Rita to become a loud mouthed expert demagogue. From experience, having a working class job and pointing their eyes and ears in the right directions turn these women from just workers to masters of knowing union rights. The film portray these women at the tail end of their patience, rapidly having the courage to demand equal pay. Rita beautifully portrays the workers’ voice, a character who has experience at the factory and years of pent-up personal anger – e.g. having to deal with her son’s condescending school teacher – to be able to speak up to union presidents and even Barbara without hesitating.

Another way of looking at this feminist courage is looking at the actresses’ CV’s, both Hawkins being busy playing another woman going against the grain and Pike playing another not-your-average perfect wife. How do they do the same things, fail in other movies yet excel here? Is this because the constraints of ‘unique’ storytelling from the other films isn’t found here, surprisingly freeing both actresses to do more? Or because they’re in the driver’s seat, letting the audience see the characters react from one situation to another instead of male actors reacting to them?

Hearing the word ‘feminist’ in describing a film might turn audiences away, fearing that a movie like this will be about the female characters against the men. The men are mostly ‘icky,’ but there are defectors from both sides. There’s Rita’s husband (Daniel Mays) who needed a little convincing and Lisa who was suspected of fighting with her husband, who happens to be a superior at Ford. Thankfully, the characterizations are more subtle and they don’t behave like they have jerseys or labels behind their backs.

Barney Panofsky (Paul Giamatti) has a second Mrs. Panofsky (Minnie Driver). She’s a Rebecca reference – an unnamed second wife considerably worse in reputation than Barney’s duplicitous first. And of course, I love her. While Barney brings up a guest, Miriam (Rosamund Pike), she replies, ‘She subscribes to The Economist but buys Vogue off the stands.’ I gotta use that one of these days.

Naturally, he ends up marrying Miriam, who’s more bland but less psychotic. Good call, Barney. At 7 tonight,The Toronto Reference Library is gonna ‘preview’ of Barney’s Version, shakily adapted from Mordecai Richler‘s swan song. Geoff Pevere is talk about the author, book and movie. Thanks for the heads up, NOW Magazine!