As I’ve said before, Andrew’s 90’s Showdown was a baby that was meticulously conceived and prepared by its multiple fathers. We sent a list – I tried rigging the polls by sending in as many obscure performances as possible, as any douche-y movie lover should. But alas, that didn’t work.

Then we compared each other’s lists from where we had to rank names. I was tired when I got to the actors so I ranked them – they were easier enough. The women, whom I dived into first, were a more daunting task for me so I wrote down if I liked or disliked their performances. I have no idea if this is a scientific method or not – maybe I get juiced up or tired by the time I got to certain parts of the list. The exercise helped me judge as soberly as possible, hoping Andrew despite some of my choices not making it. But instead of letting those words rot in a word file somewhere only to be deleted, I’m posting what I wrote and polished it as much as I can.

But before we get to that here’s Andreas’ own list. His is better, but I’ll still post mine even though I’ve made lists like this before. This will be in series form because I don’t want to tl;dr you, as much as I resent the latter concept. And I can give you three days worth of material for a day’s ‘work.’ Starting from the performances I can only write now but in short form. Sadface.

Nicole Kidman in Practical Magic (1997): She can emit sexuality from behind Sandra Bullock’s puffy wholesomeness. She could do it. Are you going to be worried about The Paperboy now?

Meryl Streep in Music of the Heart (1999): A performance list without Meryl? A list with Meryl but with this instead of Madison? Affirmative action? Her performance here proves that she can step on kittens and get away with it.

Mina Mohammad Khani in Ayneh (1997): Iran needs a star system. We can start with the cast of A Separation then any actress Jafar Panahi has worked with.

Claire Danes in Romeo + Juliet (1996): Probably the weakest of the cast, yelling just as much as DiCaprio, but she brings Angela Chase’s self-awareness here. She’s also given us the greatest rendition of the ‘What’s in a name’ soliloquy. Besides, she’s better than Norma Shearer – Disclaimer: I like Shearer but not as a Juliet.

Kate Winslet in Heavenly Creatures (1994): She has one of the best cries in Hollywood but if this performance was included the bracket would have had too much of her.

Linda Hamilton in Terminator 2 (1991): Really? No one backed me up on this? Is this world coming to an end?

Sarah Michelle Gellar in Cruel Intentions (1999): As devilish as she can be. More effective than Glenn Close if I dare say again.

And here are performances that I got to talk more lengthily about.

Natalie Portman in Leon and Beautiful Girls (1994 and 1996): I’m no going to pretend that I’m her biggest fan now. She got away with stuff that Chloe Moretz is being punished for. But still, her early performances showed potential. As Mathilda she tells a hotel receptionist that she’s Leon’s (Jean Reno) lover. As Marty she makes a deal with an older neighbour without making herself look too seductive. That control of showing maturity at such a young age is always surprising.

Susan Sarandon in Dead Man Walking (1995): Sarandon’s Sister Helen Prejean is an altruistically calming influence to a film dominated by Sean Penn’s energy. She absorbs information about Matthew Poncelet (Penn), her rebuttals acknowledging his prejudices as alien concepts without condemning him. She’s therefore the audience stand in, not judging Matthew even though we could be. She figured in a low place in my earlier lists, having not seen this movie since high school but expressing so much in one line brought her higher.

Catherine Keener in Living in Oblivion (1995): Her character, Nicole embodies of different ways to deal with sadness and wrathful misandry, whether she tolerates Chad Palomino (James LeGros) or joyfully eviscerates him. On the opposite side of that spectrum is Keener dressed as a bride, a metaphor fitting for indie perfection, an appointment that does seem unusual yet fully convincing if you think about it.

More tomorrow, starting with someone who undoes a cover-up. 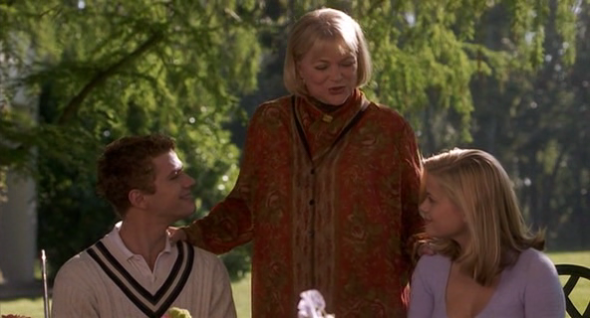 Ladies and gentlemen, I present you Louise Fletcher in the film adaptation of “Les Liaisons Dangereuses” called Cruel Intentions. Yeah she’s in this movie, undeservedly provoking Sebastian Valmont’s (Ryan Phillipe) misanthropy, one of the fakest things in the film. The Oscar winner’s got at two scenes, least five lines and loses meatier parts of the film to Christine Baranski or Swoosie Kurtz. Her role is more symbolic, as her century-old estate is the setting for Sebastian, her favourite nephew to clandestinely seduce Kansas born Annette Hargrove (Reese Witherspoon). So yes, I haven’t forgotten that this movie is about the kids.

Yes, this movie asks us to make too many leaps of logic, as Roger Kumble‘s script makes the characters swear too much but oh, they’re private school educated, which accounts for all the witty comebacks. And that their Calvin Klein, minimalist chic makes the actors look like their real ages as opposed to their characters who are supposedly 17. Or that all the rich adolescents in 1999 had therapists and wore two layers during the summer or wore tighty whities or had invisible parents. And that they all suddenly looked younger by the time they wore their private school uniforms.

But I still prefer this over Dangerous Liaisons, since Christopher Hampton’s script is still more affected and mannered than this newer version. The chateaus of France became estates and penthouses inhabited by New York debutants, its gardens turned into Central Park. My generation has probably grown up to be slightly ashamed of loving Sarah Michelle Gellar‘s turn as Kathryn Merteuil, but she matches Philippe’s smugness with her raunchy side, fighting her sexual desire for him and chooses to destroy him instead. Besides, she’s probably the only actress who can dress like Audrey Hepburn and still doesn’t look insipid subvert her character’s mean streak. And Philippe makes Sebastian appeal to Annette instead of simply seducing her, their growing feelings towards each other being both a product of rich man’s cabin fever and that she can actually see sincerity and fragility pouring through, bringing in the change that both he and Kathryn were afraid of.