BTTF: Made in Man’s Image 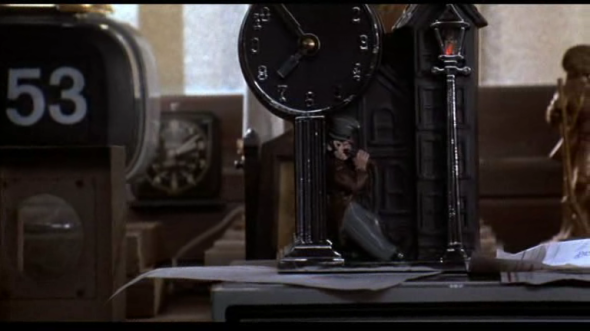 The opening credits of Back to The Future is reminiscent of one of the first sequences of Little Children. Just because both movies relatively show the same objects during their first scenes doesn’t mean that Todd Field referenced Robert Zemeckis. Besides, Little Children chooses a montage while Back to the Future pans the length of Dr. Emmett Brown’s (Christopher Lloyd) counter top in a long take. But we like to play this game? What else do those movies have in common? Which characters stand for who? Knick-knacky tendencies of outsider characters from suburbia? I’ll get to suburbia later.

Watching this movie in my childhood, this probably got me starting to say…

I believe that Biff Tannen (Thomas J. Wilson) is partly at fault for my bad choices in men. On a trivia contest before the TIFF screening of this film, my friend Sarah answered that Billy Zane was in this movie. I couldn’t see him until catching that still.

Peter Kuplowsky of TwitchFilm introduced Back to the Future and, paraphrasing, called it Reagan, pro-car propaganda but enjoyable and excellently made. Which makes me question myself in defending the film’s politics and its idealization of suburbia as the meeting point between the urban dirt and rural domesticity, that Marty justifies George (Crispin Glover) earning the right to be routinely mean to his wife’s (Lea Thompson) rapist because there’s a looming threat that it could be the other way around? It’s the fine-tuned innocent approach to this lack of innocence that makes this movie a little richer.

First of all, I just wanna say that FIRST BLOG ENTRY IN THREE DAYS!

RopeofSilicon asked its readers what their first movie going experience was. “Forrest Gump.” I was seven. I remember my paternal grandmother taking me, my sister and my two cousins to see the movie. I remember the bus stop, young Forrest’s foot getting stuck in the gutter, Forrest (Tom Hanks) in the rain, Forrest meeting Jenny (Robin Wright) and giving her some box and I remmeber the meeting being really happy and I guess it’s more bittersweet.

Everything else was a blur. For some reason, I don’t remember Jenny being a coke addicted stripper trying to jump off a building and eventually getting AIDS. Or Lt. Dan (Gary Sinise) being homeless and getting hookers for him and Forrest and eventually kicking him out because one of the hookers called Forrest a retard or something. And how it’s a one in a million chance for a special needs person to have a rockin’ body like that. And somebody investing Forrest’s money on Apple, because advertising within a film existed back then too. And that this is probably Haley Joel Osment’s first movie. Hookers and suicide and cocaine and the stock market in a family movie.

I blame my lack of memory first to the draconian censorship board in the Philippines. Maybe I slept while watching the movie, or we left the theatre when the shocking parts happened. The last scenario seems impossible since my grandma was also a cultural person who would probably have wanted us to see the terrible side of life. But then she didn’t allow me to have toy guns.

There’s also a part of me that’s a bit surprised how this movie hasn’t aged well. All we have to do is look at Jenny’s storyline which, by the way, is probably the most ridiculous sentence I’ve ever written. And I haven’t even said everything that happens to her. All those things can happen to a real person, but going through time with a timely addiction to a timely disease makes someone look more like a time capsule or a metaphor instead of a fleshed out character. Jenny, however, exists both as a foil for Forrest as a way to remind contemporary critics that this movie ain’t cookie cutter.

Tom Hanks’s performance divides critics and movie writers moreso today than when it was released. I guess if a movie fails to shock at repeat viewings, it fails. I can’t watch it in its duration when it’s being aired on TV. I like it despite its flaws, but there are too many movie I like better that came out the same year.

I also wanna say that my mom absolutely hates Tom Hanks for some reason. I don’t know when else would I have the opportunity to expand on that.