War movies use the image of the young man through exaltation. It’s a cinematic method that wouldn’t seem fitting for a genre with a predominantly masculine audience unless we realize that this male-on-male gaze, more dominant in the last three decades’ box office returns, is a fantastical version of the innocence we thought we used to have. Similarly, contemporary filmmaker Peter Weir’s Gallipoli, co-written by David Williamson, starts with the picaresque backyard stories of blonde Archy Hamilton (Mark Lee), who would have otherwise existed if Katharine Hepburn and James Remar had a love child. In his Australian home turf he gets challenged twice, by his uncle training him to be a medal-winning runner and by a cowboy who conventionally thinks that he can ride a horse faster than Archy can run. 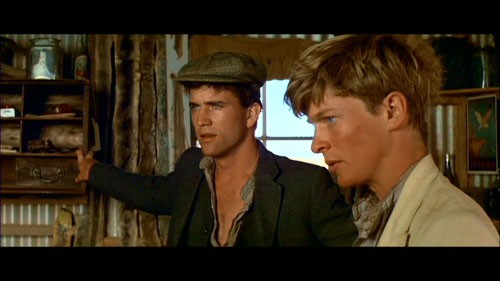 The second face is young Mel Gibson’s as a Archy’s tougher and more cynical counterpart Frank, who goes through multiple transformations, job titles, states of dress and occasional undress depending on situations he faces mostly without reluctance.

The two of them meet in a running competition and become unlikely friends, both craving the adventures that bigger cities like Perth and Cairo can offer. Archy treats the war as a way to see the world like his grandfather did, despite his uncle’s protestations of a world that has changed for the most dangerous. Nonetheless they race more than once in the movie, each challenge becoming more fraternal, treating, as the cliché would say, the world like their playground which is more of Archy’s philosophy than Frank’s.

Our first impressions of these epic actions are, again, Archy’s face and the surprising determination from his lean figure that we forget that he didn’t want to wait for the train and made Frank cross the desert to Perth with him, a difficult feat that in which he succeeds effortless. Frank stumbles before Archy does and the latter comes to save him and continues to do so no matter what country they’re in. It’s a character building experience yet both men survive that trial almost unscathed – instead of chapped lips and un-moisturized faces like those in Sergio Leone movies, all they have are dusty clothes. And during the trip he convinces Frank to join up, inadvertently promising women’s admiration and his prolonged friendship.There’s a subtext of class warfare more voiced out by supporting characters and minor plot lines and I even watch out for times when one young man is winning a race over the other but these two major characters disregard that, belonging within this story which is simply about two people who make each other happy.

In other words Archy has the same spirit of his English forebears, that optimistic underestimation that they try to hold on to for as long as they can. Their titular destination isn’t as well-known in their and this part of the world, bearing a name that the characters can hardly pronounce, which surprisingly attracts them to conquer it. They don’t heed warnings of their superiors of Cairo’s liquor and women, as if that’s the only source of their downfall. Weir thankfully allows them to have their fun, accusing a store for overcharging them for Egyptian knickknacks and hiring local prostitutes, bearing this philosophy that they should do these things if they die the next day. Both runners race again to the pyramids. Ironically, Weir sees Egypt as Australia’s twin country, both being arid locales. Because of the heat he outfits his characters with light pastel colours and later with uniform shorts, looking more like boy scouts than military men.

Being one of Weir’s earlier work  it’s easy to see his signature, more of an epic movie and a more colourful tribute to David Lean thanks to Russell Boyd’s cinematography. Instead of choosing to portray destruction, Weir is more concerned more about the myth of invincibility. His depiction of the desert or the sea his glossy yet mostly survivable for the men of our past. Even when he gets to the movie’s perfunctory ‘waste of war’ section, he directs his actors with care, playing off Lee’s smiles with Gibson’s blossoming expressiveness, one of the only directors in memory who doesn’t satirize and instead, lets complexity shine through a mask of optimism, which is a mask we can live with. Image via horroria.

The first scene involves dried blood in Janusz’s (Jim Sturgess) face. His interrogators bring out the witness against him – his own teary-eyed wife – with the same viscera, and  I remember the only bone that the Academy has thrown towards this movie. There’s more of that as we follow Janusz’s story as he gets in and escapes from a Siberian prison camp, taking six other men with him, most of whom have invited themselves to the grueling journey. There are these male movie stars efficiently worn down and their skin dried from the cold weather to mix with and placed behind the extras playing prisoners. 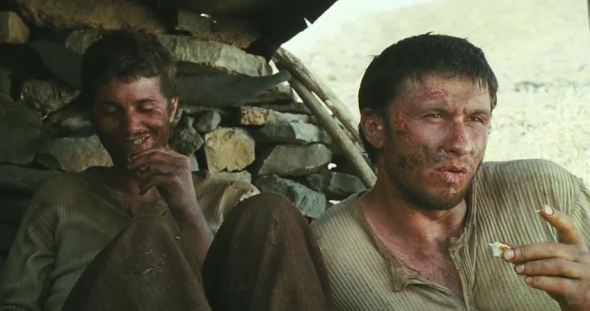 The make-up goes with the harsh conditions the men meet when they do escape, the snow on their beards while crossing the snows of Siberia and the Himalayas, the bites of cheeks in their stop at a  mosquito-plagued lake or the sores on their faces as they walk the desert. The back and forth between the rugged terrain and the rougher faces and bodies of the characters make a balance between the two aspects of the film. The frozen and mummified corpse of a blind boy who escapes with them but doesn’t even get out of the Siberian forests, flaky skin and chapped lips a la Sergio Leone, swollen feet when they try to cross the Gobi. The effects are realistic, seamless but not too gruesome. Even if it is make-up, it complements the pathos that the characters face during this epic journey.

The film actually begins with title cards indicating three people making it to India. Not having read the source material, which other three won’t make it? You’d think the top billed cast members would, but it’s more complicated than that. I also like how the film handles its ‘Survivor’ like inevitability, as some who do not make it get elegies and close-ups, some just get a cross and are left, and one person, afraid, just chooses not to move on. 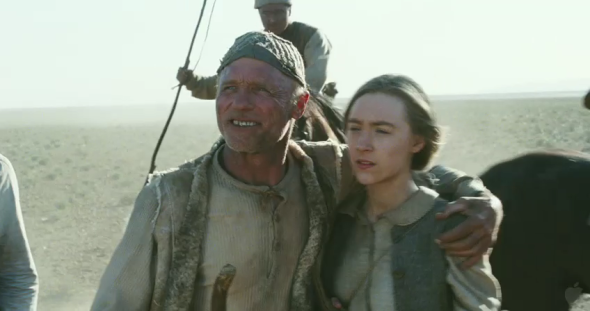 The film switches languages, although the story justifies it. Ed Harris‘ Mr. Smith is American so he doesn’t have to hide,  even if he does speak some Russian to Mongolian horsemen they meet in the desert, but the film’s top billed stars are Anglophones who sometimes speak a Slavic language. I wonder if the language aspect of the film will be more constant if , say, Bela Tarr directed it. Colin Farrell‘s Valka does the most heavy lifting with the accent work, making the language bullying and threatening. He stabs a prisoner in the stomach for not giving him the latter’s sweater. Saoirse Ronan‘s mysterious Irena is the weakest link with her accent, at first sounding like a mix between Teutonic and her native Irish. However, she saves it by singing in Russian with Valka, finally her secret as a street urchin revealed. Other cast members are known in their homelands, the film’s casting then serves as a way to introduce world-class talent and faces outside Hollywood.

The film shows the vast, almost impenetrable landscapes, even if they’re sometimes bordered by the figures of the people escaping. Nature is depicted as a hardship, sometimes unknowingly marked by political forces. The group crosses Mongolia only to find a big hammer and sickle on a free-standing structure, and now they have to change their plans, asking each other, as Irena does, whether other faraway countries like India are ‘free.’ The visuals of the landscapes are accompanied with bombastic and percussion-y music, making the audience feel like these men just want to get through without meditating nature’s beauty.

The beauty they see instead is in each other, as Tomasz the artist (Alexandru Potocean), draws his companions. The other members get ahold of these drawings and take time to complement its resemblance to photography. They remember, for instance, if he has captured Irena’s smile. Zoran (Dragos Bucur) promises to get them published. The film’s editing and structure consist of landscape, expository dialogue, cut to different landscape, the edges between scenes aren’t smooth.

The characters don’t seem to want to know about each other. During the first half hour, the prisoners are divided into cliques and are discouraged from talking to each other, a trait they have learned to practice during their escape. That’s until Irena comes along to ask them questions about themselves. In doing this Irena treads troubled waters, as she helps the audience find out which one still has allegiances to the Party that imprisons him, which innocent looking face has killed someone, or why in general did they get to Eastern Europe and therefore prison. There are signs on the ravaged areas they pass that inevitably remind them of their pasts. 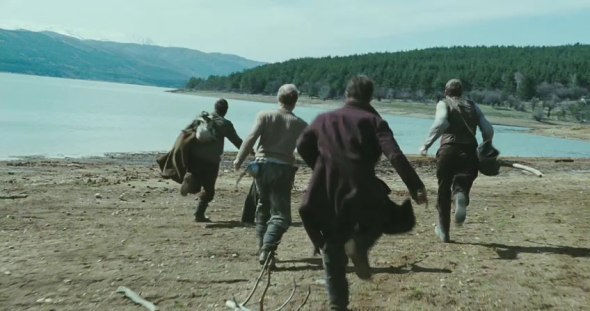 Their character developments aren’t on the surface neither. Janusz, whose kindness Smith calls a weakness, makes him unlikely to become the leader of a group of men tougher and sometimes older than him. However, his kindness goes hand in hand with his perseverance that helps, through words and actions, him and the others go on walking. Zoran, who doesn’t cook nor hunt, eventually becomes useful as he tries to help build camps, but this evolution isn’t screamed out on the script and neither are their differences. Their search for freedom reveals their intelligence and the survival skills they’ve gained during and before their escape. Nonetheless, this film isn’t devoid of clear humane actions. Kindness finds ways into little actions, leading to Voss (Gustaf Skarsgård) carrying Irena even if she slows them down. Their histories full of betrayal and cruelty would not allow them to leave anyone behind until their last breath.

The film’s ending, just like the way it begins, with what seems like unnecessary exposition and feels flat and unfeeling, Janusz’ feet going halfway across the screen as it plays a montage of the dates of the rise and fall of Communism. I’d call this film impressionistic if it wasn’t glossy and beautiful. 3.5/5