The angels look down upon Berlin. In Wim Wenders‘ Der Himmel uber Berlin, they listen to the poetry and grumblings of its different citizens. They hear mostly in German but occasionally in English, like the voices of Peter Falk (Falk), visiting to shoot a movie. They try to comfort people despite their limited powers to send their messages across. When they meet they compare notes. Today is a normal day but they talk glowingly, their excitement towards humans is legitimate in a way, every life a miracle full of climactic emotions and insights. 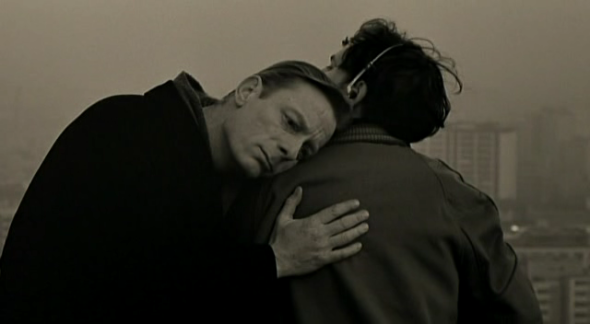 Claire Denis is Wenders’ assistant direction and it does feel like a Denis film at times, as the camera sweeps to follow the angels and the Berliners in their natural environment. There’s also some impressionistic touches, with the first shot of a child’s eye or many others, like a wing, the inside of a sewer, the angels and their shadows, sequences showing high angle zooms, fast subway cars and the people inside them and an angel reacting to these people in a dark space. The occasional violin in the film score also gives that impression of a continuing German film making tradition.

Among the Berliners are Turkish families, black students and Asian rockers. Colourful graffiti plasters itself unto the Berlin Wall. But it inevitably shows reel footage of the city after the war. The angel Cassiel guides an old man within the obliterated Potsdam district, the latter shocked that the can’t find it in its original bustling form. The movie has its own concepts of statehood, as if Germany has existed before the landmass rose out of the water. The angels crossing the wall feels like a statement although most of the film doesn’t have the preachy tone of every political film. Instead it has the spiritual aura, thus showing a fractured yet evolving country. 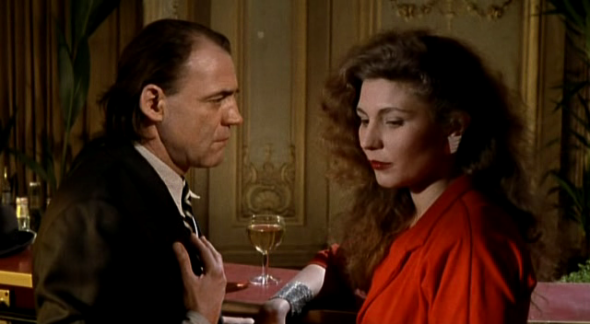 It wouldn’t be long until one of the angels, Damiel (Bruno Ganz) envies the tactile nature of human experience although his colleague tells him to distance himself from such thoughts. He’s partly motivated to become human because of a Barbara Stanwyck lookalike of a trapeze artist named Marion (Solveig Dommartin). Ganz’s benevolent face shines throughout Damiel’s angelhood that naturally gets stripped when he transforms. He, with the movie, negotiates this premise, the human Damiel having the childlike giddiness brought on by a schoolboy crush. He still embodies the spirit of the city he used to watch.

Mother: A Woman Under the Influence

There was a Q&A after a screening of John Cassavetes‘ A Woman Under the Influence with its star Gena Rowlands. I wanted to ask about Cassavetes’ Kubrick-esque methods towards directing or how this film might have been about their generation. Her character, Mabel Longhetti declares that she’s not a ‘stiff,’ mocking other housewives’ affectations. She balk later and tells her husband Nick (Peter Falk) that she can be anything he wants but he tells her that she’s fine the way she is. Their brashness rebels against past generations’ behavioural conventions as well as those people’s facades of white normality. Instead, I asked instead about whether she thinks Mabel’s insanity comes from society or within – like anyone, she said both. 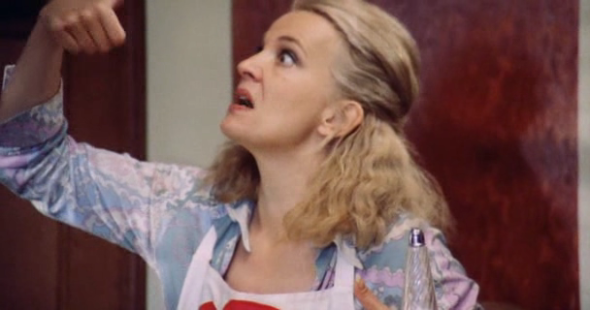 The film is frustrating  because of how it portrays Mabel’s, like Pink Flamingos but with complex shot schemes. The camera blurs or closes up on characters during conversations with others who are off-camera. Cassavetes didn’t want to plop a camera down to capture a domestic drama through wide-shot long takes. Instead he cuts to different angles, skipping from one thread of a conversation to another, making sense in portraying the tempers firing off from different characters as well as their constantly changing allegiances for or against her.

Reading Jessica Winter’s book “A Rough Guide to American Independent Film,” I misconstrued her synopsis of the film and assumed genre conventions, thinking that Mabel being ‘committed’ is Nick’s fault. But her insanity surfaces first, causing his outbursts, making him unsympathetic. However, there’s some progressiveness or even misguided feminism in him – seeing her post-hospital self makes him want her earlier imbalances back. Maybe the double standard shows that we can dismiss Nick’s insanity as boorishness while her essential role in the family can’t make her expendable. That her insanity being separate from their idea of her while there’s no ideal Nick.

“Masks and Faces: The Films of John Cassavetes” continues until July 31st at the TIFF Bell Lightbox. Tonight’s movie is Husbands at 6:30.