Fighting words from possibly fictional Charlie Kaufman (Nicholas Cage, looking like what Jonah Hill might look like in 20 years) to fictional Susan Orlean (Meryl Streep) in “Adaptation.” Those words are more effective than anything Kevin Kline ever says “Sophie’s Choice,” because Charlie’s coming from pain, from a connection and a relationship finally consummated in its own strange way with a woman he’s never physically met until this time. In that scene, both lose important men in their lives. Charlie loses his fictional brother Donald (Nicholas Cage) in an out-of-nowhere car crash, while Susan loses John Laroche (Chris Cooper) to a croc. Their confrontation is both hilarious and sad. The two deceased characters have been Charlie and Susan’s crutches, alter egos, dumber, more oblivious versions of themselves with delusions of grandeur. Charlie unlearns the Susan who’s been both myth and sexual fantasy and sees her just like him, a writer stuck after letting go of an obsession. And now that that part of them is gone, they can fictionalize this part of their lives and move of to other projects. 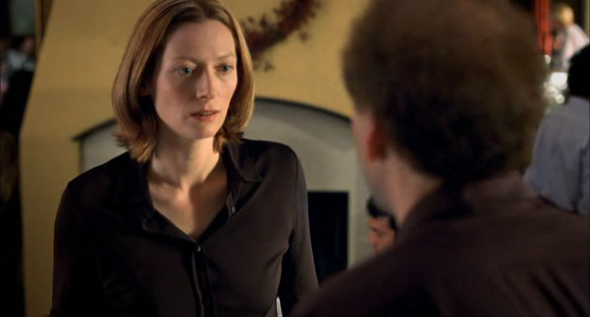 (Fine, she does look a little pissed here)

I also think this is the first movie I’ve seen where Tilda Swinton looks normal. She’s always been a beauty from another world, but as Valerie Thomas in a light sweater she refreshingly looks more conventionally pretty. There’s also the warmth in her, that as much as Charlie’s repulsed by himself, beautiful women don’t just tolerate but actually accommodate him. Her ‘breathing down his agent’s neck’ only happens off screen.

I kinda wanna talk about Amelia (Cara Seymour) and Donald’s girlfriend Caroline (Maggie Gyllenhaal) too. These two women, as well as Valerie and her doppelganger Alice the Waitress (Judy Greer) don’t seem to be repulsed by Charlie, but that’s only because the romantic barrier hasn’t been broken. That only gets broken with Alice, who isn’t as accommodating by then. 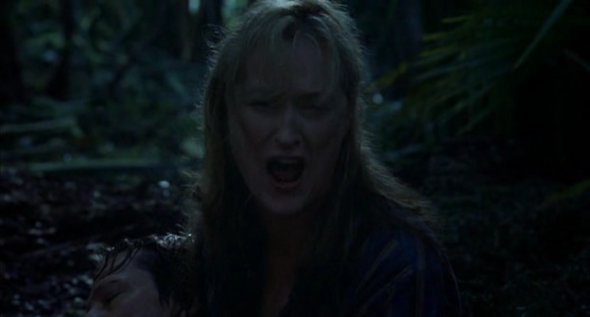 (Miranda Priestly is calling you fat)

I’m not sure if I totally love the movie, but it’s not as jolting in its surrealism as “Eternal Sunshine” or “Synecdoche,” as much as I like those movies. A part of it is probably due to listening to the characters’ voices or seeing what cars they drive before actually seeing them. The characters here are humans instead of aesthetic elements filling up the mise-en-scene.

FACT! Nicholas Cage was once good.

Maybe “Zodiac” is trying to show an alternative system in solving crime. There are always gonna be cold cases and the police cannot fully dedicate themselves to every unsolved crime. They’ll just find some seemingly altruistic nerd like Robert Graysmith (Jake Gyllenhaal) to ponder over dusty evidence. I was gonna call this transfer system perfect if it didn’t ruin families and if it didn’t end in a staring contest instead of an actual arrest and conviction.

The movie starts with a high angle wide shot of San Francisco in the Fourth of July while a croony male version “Easy To Be Hard,” a Broadway song about civil rights is playing, making the scene and the rest of the movie seem dangerous in a romantic way. We see the Transamerica Tower being built. “Zodiac” glides for a 160 minute movie about a serial killer, showing the passage of time with the same artistic hand used with depicting a man stuck in the past.

This is the best David Fincher movie I’ve seen so far. It doesn’t have the blatant dialogue about morality in  “Se7en,” an element that can make a movie age like fish (but don’t mistake me, I like a lot of it). It doesn’t have the ‘shut up, Brad Pitt’ of “Fight Club,” although I like Brad Pitt everywhere else. “Zodiac” doesn’t declare itself as a great film like the other two, but watching this after two and a half or so years makes me feel like I found a hidden jewel.

(A better stalker than Edward Cullen)

Graysmith’s obsession is still seductive because it attempts to shatter  impartiality, especially that of police work. He tries to get into police stations and detective’s homes and yes, that’s annoying. But the typical police officer isn’t sadistic enough to say no. In his last conversation with David Toschi (Mark Ruffalo), he knows how to spin a tale and has done a lot of research on the suspect’s time line coinciding with the killings. Toschi tells him he can’t prove any of his speculations. He bravely replies that ‘Just because we can’t prove it doesn’t mean it’s not true.’

Lastly, why is John Carroll Lynch playing douche-y roles? He’s amazing here as Arthur Leigh Allen, and he’s serviceable as one of the guards in “Shutter Island.” I just miss the loveable husband from “Fargo.”