The first time I saw this film I thought it was lighter and less stiff upper lip than its reputation. I even tolerated that it used the oldest joke in the book – ‘…deaf in one ear.’ ‘Sorry?’ I also thought that this would end up being one of those movies where ‘nothing ever happens,’ even if it does.

Pardon the socialist reading of the film, but Robert Altman‘s GOSFORD PARK shows the class stratification between the dying British noble class and their servants. The latter is both gossipy best friend and lap dog to the former, this dual role making the relationship more complex, nuanced and multifaceted than any worse ‘camp’ possibilities it might have already had.

This latent function of the servants make them the eyes or the audience stand-ins for the movie, especially Mary MacEchran (Kelly MacDonald), the ‘Miss Trentham’ to Countess Constance Trentham (Maggie Smith), Mary being new to the country world as we are. She’s the one finding out things like bringing a small box to store jewels that would be used on the first night. The secrets of the house falls under her lap, and she spends a significant time in the film running around the servants’ level to ask her coworkers why they’ve done certain things she wouldn’t.

What I love about this film are the scenes like Constance throwing a scarf at Mary to pack while leaving the house. It’s simple moments like this that can create a feeling of outrage within an audience, specifically because of how fast they can happen. Constance also does this childlike, as if she’s doing nothing wrong.

Then I realized that Constance, just like the upper classes in most movies set in the first half of the twentieth century, is a child. She needs an allowance that is threatened by Lady Sylvia McCordle’s (Kristin Scott Thomas) husband, businessman William (Michael Gambon), who for some reason has control of the finances that would be passed down from centuries long lines of nobles. It also reminds me of Vera’s condescension towards her own mother in “Mildred Pierce,” a warped and archaic mind-set that income is a birthright.

By earning his, William is threatening the nobility’s old world order, although that doesn’t stop them from depending on him. He is the one to ask for allowances and investment money, having created many businesses that continually exploit the poor in many ways. And they get disgruntled when he ruthlessly takes away.

The movie also shows the characters’ diverse reactions what is happening around them. Constance anticipates the shame in the inevitable event that would lead all of them to confess their grievances about William. Mary grows, although the sills she attains as a novice servant may eventually be useless. Sylvia’s callous, thinking about selling the house as if that is only a minor change.

However, there are characters like Elsie (Emily Watson, who usually plays innocent roles), the first head maid, the woman who teaches Mary about the big and little things about serving in a country house. She’s like the older sister, smoking a cigarette and telling a younger Mary on her lovers and the realities of romance and sex in the upper and middle classes. She wards off Henry Denton’s (Ryan Philippe) come-ons. She gets sacked for speaking to Sylvia out of turn but she bravely says that this even ‘might be the making of me,’ riding off in Hollywood producer Mr. Morris Weissman’s (Bob Balaban) car, a beginning in itself.

Growing up when I did and now knowing any better I watched a lot of guilty pleasure crap from the 90’s. Sister Act was my introduction to This is also my introduction to Harvey Keitel and Bill Nunn. The latter seems to age between three years, from being Spike Lee’s Radio Raheem, the punk that cops shoot to a Lt. Eddie Souther who saves nightclub singer Dolores (Whoopi Goldberg) from Vincent LaRocca (Keitel) by tucking her into some inevitably awkward sitcom-like placement in a San Francisco convent and turning her into a Sister Mary Clarence.

Goldberg and Maggie Smith leave impressions but I didn’t know that both, who squaring off in the film, are EGOTs, Goldberg having a Grammy and Smith having two Golden Globes. It’s not their best work but let them have their fun. But I couldn’t help but compare both to other movie nuns, Clarence being Sister Ruth. I also see a lot of Sister Clodagh (Deborah Kerr) in Smith’s take on the Mother Superior, the northern British inflections highlighting their controlled anger against younger, rebellious nuns symbolizing a world against tradition. Sitting on the pews she looks up to Clarence on the stage instead of looking down on her to supervise her, Clarence’s implicit message of change as helpful yet jarring enough for her not to accept at first.

It’s snobbish to not see this film’s few merits like casting the faces playing other nuns. It’s easy for the film to seem to have been, pardon the expression, cut from the same cloth. Instead the movie actually allows most of them to stick out with personalities, and it must be hard for these actresses to express that through a habit and a square hole where their faces go. There are the more fleshed out characters from the sunshine’ like Sister Mary Patrick (Kathy Najimy, also famous for playing Peggy Hill in “King of the Hill”), sister Mary Robert (Wendy Makkena) who fights her own timidity by being the nun choir’s stand out voice and acerbically hilarious Sister Mary Lazarus, who seems to have had an equally and healthy adult life before taking her vows. 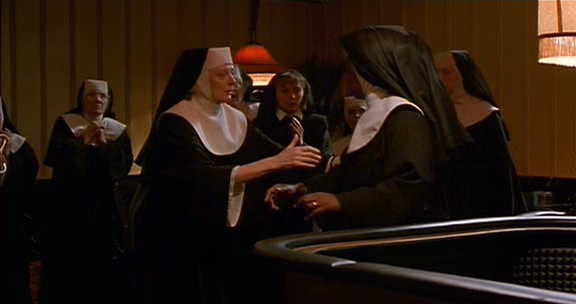 I also want to do some armchair assessments about how films like this perpetuate the image of the urban area. There are cringe-inducing scenes like one when Clarence, Patrick and Robert sneak out from the convent across the street into some dingy biker bar (I swear if I see a leather jacket in a 90’s movie again). And this isn’t a Whoopi movie if there isn’t happy synthesized trumpet music during chase scenes. Was the Haight-Ashbury that bad around the late 80’s and early 90’s? I suppose this movie’s fantasy of the Church revitalizing terrible neighborhoods is better than Starbucks doing the same thing in the real world. And at least this is about Clarence instead of her being a supporting character in the neighbourhood.

The Prime of Miss Jean Brodie

Catholic education, in my experience, gave me the most intelligent and well-read adults who unfortunately aren’t good teachers. 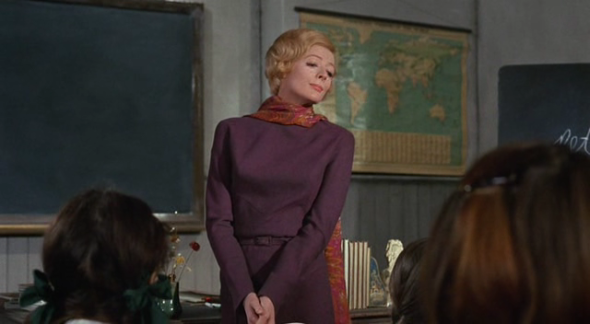 Smith in The Prime of Miss Jean Brodie, the movie where she won her first Oscar, gave me high expectations. I want to dismiss her performance. Her Jean Brodie is intentionally a caricature and I’ve seen deluded done better. Sometimes she slows down and lowers the pitch of her voice thinking that she’s fooling both the other character and the audience that she’s being profound. The character’s interesting, as she ‘educates’ nine year olds about her lovers is an education. But hey, she talks about Flanders field and quotes Robert Burns – THAT’s an education, right? This talk about ‘intruders’ and ‘do as I say’ eventually leads to more vulgar discussions and at one point I was wondering when should one girl stand up and put an and to her. 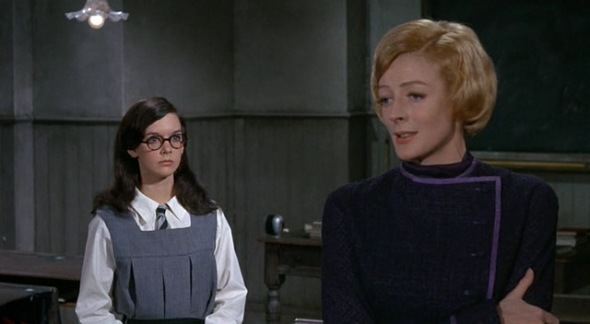 Sandy (Pamela Franklin) comes to our rescue, and is this movie’s best in show. Jean calls Sandy dependable, faint praise for calling someone boring, and Sandy does seem boring since other girls are assigned by Miss Brodie to be more interesting. But she takes of her glasses – a cliché yet an effective one thanks to her – and does the best reverse striptease, showing how much a girl of the 1930’s has to put on. And young Sandy owning a 43-year old Mr. Lloyd. ‘You could go on painting. You don’t need a model,’ indeed. She does the simplest but most effective things. Again, Brodie is right in saying that any girl she teaches is hers for life, as Sandy can change one thing around her, and can do it again in her future.

I almost forgot that Celia Johnson gives a deceptive performance as Miss Mackay. While talking to the girls about how artistic and musical Miss Brodie is, I wonder if she’s jealous of Brodie or letting the girls think that she’s ‘cool,’ warming up to them so they can tell the truth. 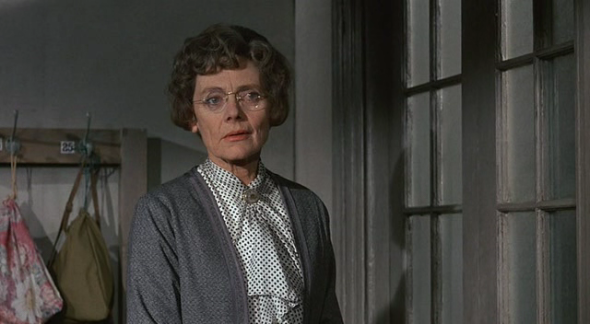 Nonetheless, They Shoot Horses, Don’t They and California Suite better be awesome.