Apparently this movie’s about guilt. The best thing I could come up with was that the characters weren’t as annoying as my first impression of them was and that it wasn’t really that feminist and that there’s so much. Food. In this movie.

Half of Scorsese movies are a Sisyphean project towards empathy, but he strikes gold in analyzing Henry (Ray Liotta) and Karen Hill (Lorraine Bracco). In a scene, Karen tells Henry that she flushed $50,000 worth of cocaine because of the police presence near their house, he is exasperated by knowing that their lavish lives become hollowed out. They repeat the same rationales for or against throwing out said cocaine for a few lines. At one point, I really thought this scene is gonna end like the last time. If I have to remind you, he hits her, she flails to the floor like a Guy Bourdin model (thus giving me ambiguous feelings about that, Marty), he storms out, the huge argument further fractures the relationship. 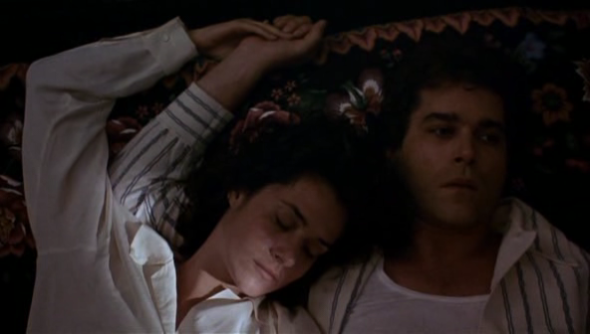 Now back to this scene. Instead of another assault, she apologizes, he doesn’t say but implies that she could have been right about making said cocaine disappear. Tour de force character writing/directing/acting come together as he goes into fetal position by instinct. He doesn’t have to think about being vulnerable, it’s surprisingly a part of his nature. She joins him, bellowing another “SORRY!” They become a lump of black and white bodies and as cheesy as it sounds, become one. Her lamentation articulates his the anguish that most Scorsese men can’t verbally produce.

This movie has a lot of flaws, specifically around Karen’s characterization. I can’t still understand how he attracted her. Passivity is under the guise of being observant and pragmatic, materialism under the guise of female desire. But there’s this appreciation or realization that gangsters will always have mistakes because they’re illegitimate by nature. And that the characters seem in a better light under a second view. And the food.