Before the main feature, the theatre played a Pixar short called ‘Day and Night,’ written and directed by Teddy Newton. Two dogs, Day and Night, have a non-verbal debate on who is better by showing what happens through their day or night bodies. There’s an NPR-like Deus-ex-machina that helps them through. This deus-ex-machina, as a young adult, is where I start looking at the most banal thing and think ‘Is this appropriate/comprehensible to children?’ And are kids supposed to know that Vegas exists? But those little twerps have ears and do understand the ‘moral’ of the story. Plus there’s Vegas and arm square-dancing and stuff. Oh, and night.

In this installment of the Toy Story series, the toys haven’t been played with in a while since their owner, Andy, is 17 and 17-year-olds don’t play with toys anymore. A mix-up gets the toys to a daycare called Sunnyside. Woody (Tom Hanks) escapes during recess, the rest realize that Sunnyside is the exact opposite of perfect. 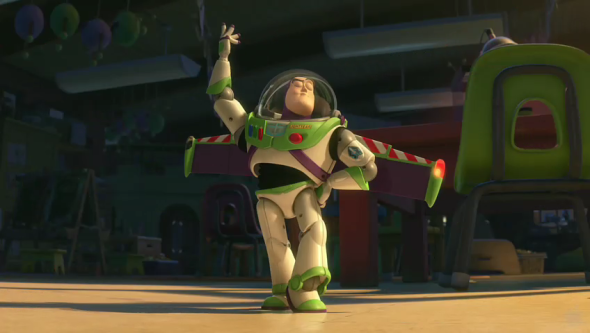 Buzz Lightyear (Tim Allen) is the best part of the film. Spoilers. Woody’s escape makes Buzz the de-facto leader. The latter gets caught by the Sunnyside toy cabal led by Lotso (Ned Beatty) and Ken (Michael Keaton) and is manually switched to the dark side. As a villain’s henchman, he helps to get the film into a Cool Hand Luke reference. When the toys try to switch him back, they accidentally tap into his Spanish mode. The film’s one or two detractors would call that a gimmick, but I can BS and say that the Spanish gag is about hidden talents and imagination. But I’m a sucker for physical comedy like Buzz dancing circles around Jessie. And you know, there’s gotta be a way to herd the ‘Dora the Explorer’ fans into the multiplexes.

Kristen Schaal’s in this film, playing a naughty dinosaur.

Up, then Toy Story 3, then Wall-E. I have no memory of Toy Story and Toy Story 2, and I don’t even think I’ve seen the latter. I have never seen Cars, but no matter how terrible it might be, it gets a conditional pass because it’s Paul Newman’s last film. Put A Bug’s Life under Toy Story 3 by a hair. If you wanna drag 1995 into this, Pocahonats is above Wall-E, and The Lion King trumps all.

Then there’s Andy, who calls the toys ‘junk,’ slightly appropriate for objects kept in the chest while Andy’s skateboarding or on his laptop. What the other toys, especially Mrs. Potatohead, hears is ‘junk,’ fueling their desire to get away from Andy in the first place. Real people of Andy’s age aren’t into ‘being a kid again’ as I imagine other people might think, and in the beginning of the film, his relationship to these inanimate objects  are way apart. I also imagine that his fictional world doesn’t think ‘novelty’ when thinking about toys popular in the mid-90’s. A part of the demographic of this film are 17-year-old kids or older, like people my age who were children when the first movie came out. The story is mostly about the toys yearning for Andy’s touch, successfully getting our sympathies when they’re pretending to be inanimate. Yet it’s also about wondering whether Andy will tap into a childhood nostalgia or not, the same way our memories come back to us even if we can never fully relive them. 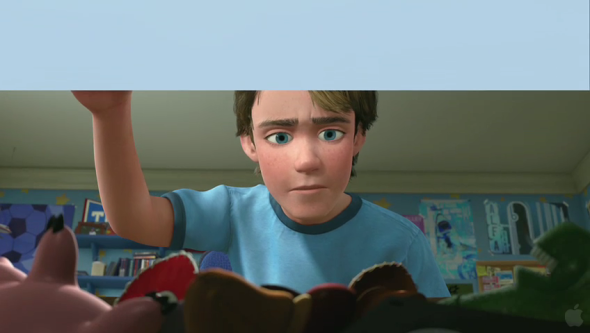