While Christmas shopping in New York, Sara (Kate Beckinsale) and Jonathan (John Cusack) meet and seem to really like each other. But she’s making him play a game, making each other leave their numbers randomly in NYC. She says that they’re meant to be together if they find each other with these little signs. If I was in Jonathan’s place I would just surrender and assume that she doesn’t like me as much as she appears he does, or that she has baggage that I probably shouldn’t deal with, despite of how beautiful and charming he is. The latter is the most plausible theory but for some reason “Serendipity” doesn’t address that.

Seven years later we see both not as close to each other as they want to, because it’s their fault. They revel in their fake happiness, surprisingly engaged and soon to be married with other people (John Corbett). But they’re thinking about the one who got away because they were meant for each other, although one of them could have had the power to stop their mental torture and for this movie to have stopped happening. Why do romantic comedies not make sense? Why am I such a guy? I should just crank one of these things out. I’ve ‘fallen in love’ like this but without subsequent meetings built bridges it’s difficult to sustain such emotional connections. Although I’m considering the truth within that statement in a pre-Facebook era, and wondering about the ramifications of separations like this had this movie been made earlier.

And despite of being his bread and butter I never understood why Cusack starred in these things or in any movie. Besides, he seems to go through these informal five-ish year hiatuses. I don’t know anything he’s done between “Bullets over Broadway” and “High Fidelity” and between “Identity” and “Hot Tub Time Machine.” I have amateur porn star CV’s to complete that seem more urgent than going through all his movies. And he’s paired up with all these younger women like Beckinsale and Lizzy Caplan and Alice Eve that I’m numb to it now. I used to stalk the Top Ten Money Making Stars list all time and he’s never appeared once. People who make money should only be getting away with stuff like this. Why is he getting away with this? Is it because of Lloyd Dobbler? I’m sorry to ruin everyone’s teenhoods but he’s not Lloyd Dobbler. Lloyd Dobbler only happened once. And why is his sister less famous than him?

But I’m not so ignorant about Cusack’s CV to know that every other movie of his has Jeremy Piven in it. He moves up from stoner friend or doped sailor to a NYT obituarist who helps Jonathan find clues to who Sara is. Piven, known as a terrible person, does have the chops to show empathy for Jonathan. Sara is equally equipped with a BFF in Molly Shannon, as the former gives the latter a trip to NYC as a birthday gift but with her own hidden motives. Basically, at the heart of these movie are two useful people who suffer under the weight of their love struck and manipulative friends.

Kristin Scott Thomas in Richard III (1995): is a supporting character in Richard III in a way that she appears here and there but has that really big scene in which she confronts Ian McKellen’s titular antihero. Having a part within a gender and age so maligned in Shakespeare’s work, she chose to play on Queen Anne’s hard and new loneliness to show us why she’s so angry with Richard yet convinces us why she would choose to marry him anyway. And even her happiness, albeit momentary, is clear. It’s an emotion she barely shows in its fullness in her later work.

Pam Grier in Jackie Brown (1997) is probably one of the most important actresses of her time just as legitimately as Meryl Streep is (they were born in the same year). But that hasn’t been put to light because of the movies she worked in. Thankfully, Quentin Tarantino makes use of Grier’s Stanislavski training and experience in exploitation films to flesh out such a character like Jackie Brown, a woman using her looks yet is toughened by time. From the quotable quotes like “Sit the fuck down!” to romancing Robert Forster’s character to a slightly baffling final close-up, this performance is as skilful as her collaborative director’s compassion.

Angela Bassett in Malcolm X (1992): Because of Angela Bassett’s sinewy physique and alto voice, she will never be seen as feminine in the ‘weak’ sense, so she’s the perfect actress to play Betty Shabazz, going tête-à-tête with Denzel Washington’s protagonist in Spike Lee’s Malcolm X. And head to head it is, with this loving couple enter their big argument, their clashing yet complementary voices captured in probably one of the best acted and directed scenes ever on film.

Kate Beckinsale in The Last Days of Disco (1998): Who invented the wheel of minimalist acting? Did Stacey Dash in Amy Heckerling’s Clueless start it? It’s the kind of human behaviour captured in both Girls and in Lauren Conrad’s reality TV shows. I want to give Whit Stilman some credit, perfectly capturing the semi-comatose bourgeoisie in one of its many transient phases. His movie The Last Days of Disco also has two leads – Chloe Sevigny and Beckinsale, both conveying the characters’ aloofness. But why give Beckinsale more credit? Because she has more teeth, especially in that scene where she slaps Sevigny also expressing camp in the sense that there’s heightened drama between characters who deep down probably don’t give a shit. And she’s on my list because fuck you, I’m high, that’s why.

Laura Dern in Wild at Heart (1990): David Lynch is the kind of auteur to sadistically capture his actresses trip and wail yet also make them look like they cleared whatever impossible hurdle he has set up for her. And what kind of self-respecting woman would even say the lines that he wrote for Dern in Wild at Heart? Yes, the same woman who eventually says the two most female-empowering quotes of all time (In Jurassic Park: Dinosaur eats man, Woman rules the earth. In Citizen Ruth: What’s the matter? Are you fuckin’ people deaf? I said I want an abortion!). Yet she does it. I will repeat what I say in my review of this movie that too shortly conveys its qualities as an interesting failure. Yet during her line readings she is sexy, ridiculous, childlike and scared, often mixing two or all these feelings at the same time. It’s within an extreme worldview of clashing Lynchian emotions that we realize that we don’t ever, ever need to take psychedelic drugs to ever feel the way she does, because she does it for us.

Laurel Canyon, the perfect boring couple, Sam (Christian Bale) and Alex (Kate Beckinsale) talk at each other and sometimes lie to each other. Sam has to move back to the titular Laurel Canyon to practice psychiatry in a great hospital there, and Alex comes with to finish her dissertation. temporary bunking with Sam’s mother Jane (Frances McDormand) and her lover Ian (Alessandro Nivola), the environment proves to hinder work and shake up relationships.

It’s funny that 60% of the major players in this film are British but make for more convincing Californians than Julianne Moore and Mia Wasikowska. And that bale and Nivola could have changed roles but the American Nivola does fit the hairy-chested, childlike Chris Martin-eqsue role better.

Alex is such a complex character that Cholodenko has to justify the script’s choices within and around her. When she gets invited to join Jane’s group, Jane explains that she can judge Jane’s work because common sense drives popular music, thus anyone can judge it. When Sam pours his heart out to Sara, it follows with a scene when Alex misunderstands everything he’s been saying to her. A question is often followed by an answer, thankfully those answers aren’t too expository. 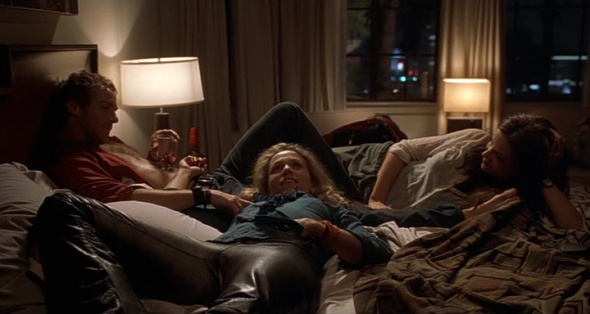 And oh Lord, Kate Beckinsale. I’ll always love her for her deadpan fierceness, if that exists, in The Last Days of Disco. Her MUBI profile doesn’t show how derided she is after The Aviator. As the soft-spoken Alex, her retreat with Sam lets her go through a sexual awakening at the same time as Sam, but hers is more intense, later on explaining that she’s never experienced fucking up. Within the film, she goes from routine lovemaking to romantic desire. It’s sad that they didn’t go through the full experience together. And she smokes a joint like a true beginner. I miss this girl.

Would it be fair to say that Cholodenko almost perfectly encapsulates the white experience? She doesn’t have the Holofcener/Fey guilt thing, but Cholodenko puts the straight-laced and the wild ones within the same square inch, or in this case, the same family. Most of the movie shows Sam and Jane treat each other passive aggressively until the big explosive scene in the denouement, which air some raw emotions out.

And again, time to download me some Mercury Rev.