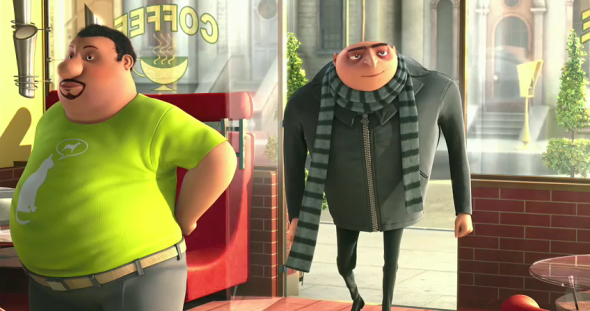 Before I talk about the likes and dislikes about the movie, I just wanna say that Despicable Me is in between good Avatar and headache-inducing Alice in Wonderland in the spectrum of 3D films. If there’s any part of a 3D movie when I take off my glasses and don’t see anything different from watching the movie with or without the glasses, we have a little problem. I do like he sleek designof some interior/exterior spaces of the film, however.

Here, however, is the structural conundrum about Despicable Me. The first scenes are boring. I didn’t really wanna see our anti-hero Gru (Steve Carell)  freeze-ray his way into getting a latte. However, I can’t think of away to cut any of them because if I do, I won’t have enough background on the characters. Basically, Gru, a worn-down villain, adopts three girls to infiltrate another villain’s lair. These tedious introductions help make the children sympathetic and make Gru’s 180 much more surprising and delightful. 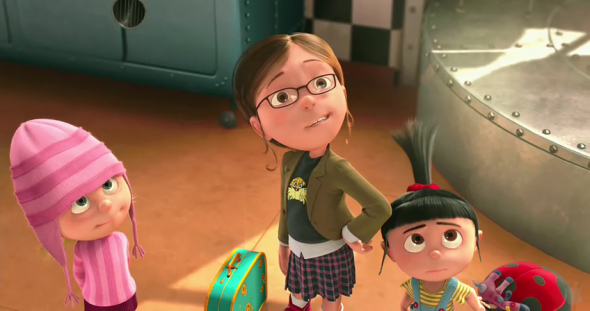 Gru’s Eastern bloc accent is stage-y yet not distracting. The children even make fun of it to show him how incompetent he is at being a villain. There are also flashbacks within the film showing Gru’s childhood when his mother (Julie Andrews) shrugs off his little achievements. Most people with terrible childhoods like Gru’s have shortsighted reasons for having or adopting kids and they treat their children as terribly as they have been treated. However, Gru turns out to become a perfect parent. Maybe it’s because Gru, like many adult protagonists in animated films, are children in adult bodies who is looking for playmates. Maybe it’s because the girls are kinda bratty and sarcastic and they’re not the kind of children you lie to or mess with.

Nonetheless, it’s also very funny. It takes a while for the movie to bring on the laughs, but it’s worth the wait. This movie also has the greatest Godfather parody scene in recent memory, and there are funnier parts of the film than that.