On the Avenue, Fifth Avenue… 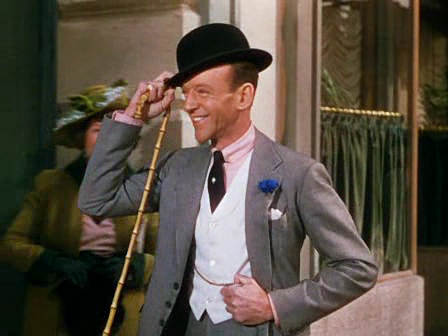 This week’s episode of Nathaniel’s ‘Best Shot‘ features Easter Parade with songs written by Irving Berlin wrote between 1914 and 1948, the latter being the year the movie came out. The movie is set in between 1911 and 1912, a time of pre-war gaiety, when characters like Don Hewes (Fred Astaire) strolled on Fifth Avenue, the American version of Parisian boulevards, and greets his fellow Manhattanites ‘Happy Easter’ on that holiday’s eve, which is known in my part of the woods as Black Saturday. And apparently Black Saturday is when secular Protestant Gilded age New Yorkers bought gifts to each other when all we got were eggs and dried up palm leaves. God being Catholic sucks. 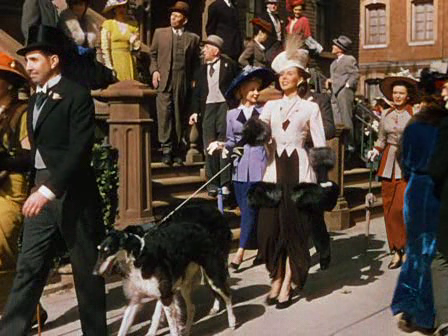 This is an access to a culture, a 103-minute extension of the ridiculous silhouettes in the fashion show in Cukor’s The Women, shown in a technicolour version of traditional Golden Age film making. And I don’t care if it didn’t really exist because it brought us a fluffy movie like this, with its avenues of shops and restaurants where people on the up-and-up flashed what they had while people of all classes mimed what they wish they had to offer. A field where the exotic shape shifter – embodied within Nadine Hale (Ann Miller) – battled and arguably lost against the all-American – Nadine’s simpler and thus better replacement Hanna ‘Juanita’ Brown (Judy Garland).’ A routine in the Ziegfeld Follies about fashion magazines and being surprised when some of the rags featured are still running. Stages where Miller can make her heels click without moving and Astaire slows down so that we’ll notice that he’s on black face. A place where, just like “Revenge,” dinners are replaced by scandals or in typical musical fashion, a song and dance routine. 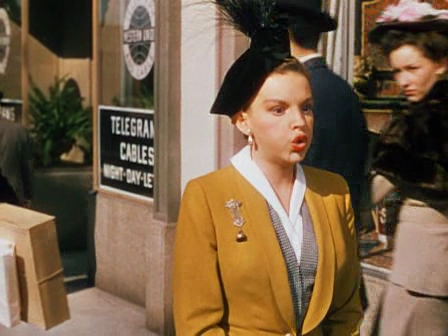 In obvious ways, this is Judy’s movie, about her discoveries and rediscoveries. The movie reminds us the audience of the qualities that made us love her, that middle American-ness can be qualities that can still make a star survive amidst the countless dangerous sexpots of the 1940s. In one scene she makes funny faces when posing doesn’t turn men’s heads. She’s at her best when she performs with the girly quality with which she’s made relative peace in her adulthood. But despite holding on to the true self that might be buried under misguided mentoring, she doesn’t succumb but gets integrated into the glamourous Broadway lifestyle within which she must play. The best shots featured in this post are MGM’s clean versions of Manhattan’s avenues, leading up to the last gratifying moment of Judy/Hanna’s stardom, where character and actress takes it all on in good humour. 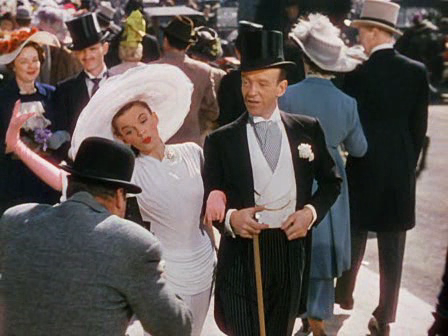 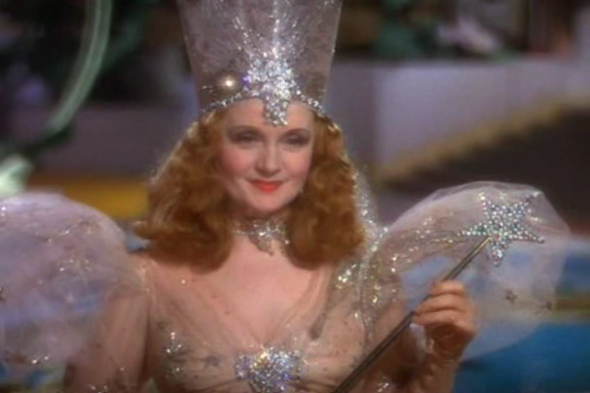 Frank L. Baum‘s book The Wizard of Oz was a downer when it reveals that Oz is a fake. Either he’s posing as a wizard to stop the anarchy that the bad witches represent or the picture show is his way of fitting into the magical world. The adaptation’s loyal to the source material, as Dorothy’s (Judy Garland) shitty life in the middle of nowhere changes when a hurricane transports her into the magical world where, among many things, she meets Glinda the Good Witch of the North. ‘I beg your pardon, but, I’ve never heard of a beautiful witch before.’

She’s not that pretty. And for a good witch she’s not hesitant to make a girl walk alone in heels with three strange men. Or the ‘munchkin’ explosion – this is the kind of high quality film criticism you can expect from me – at ‘The Witch is Dead’ number, one of the munchkins being a very tall child. There was like a hundred of them MGM, you can’t give up now! Yes, seeing this as a young adult, I couldn’t help but snark at some of the film’s dream logic or gay innuendo. 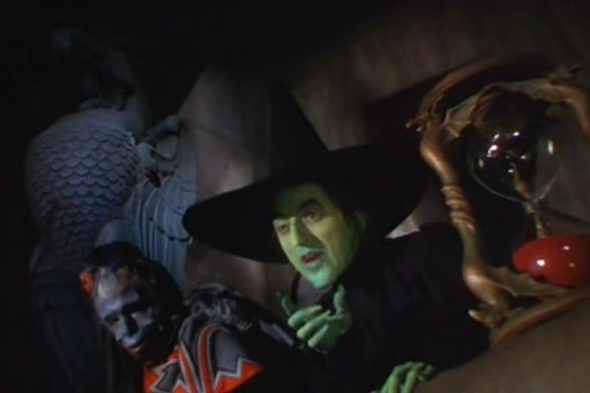 But as the colour sets in, the performances become livelier. Matt Mazur wrote about Margaret Hamilton’s work, but my MVP is Ray Bolger. Playing Hunk, his klutziness during the BW parts dialed down to 1930s bit-part standards, but when Dorothy meets Bolger as Scarecrow his physicality astounds. Along with this technicolour cast he is more believable, ushering a new era in cinema. Colour doesn’t hide anything. This should have won Best Picture despite the competition, because it presents a challenge for movies to reach new heights.

That doesn’t mean it abandons all ‘older’ methods and cues. The ‘oh-we-oh’ tune sounds like something you’d hear in a film half a decade earlier than this one but it doesn’t make the film feel dated. The way the film can borrow little hints from older and newer styles is simply magical.

Speaking of Judy Garland, Judgment of Nuremberg is playing at the Lightbox today at 6:30. Vincent Fleming’s The Wizard of  Oz is part of TIFF in the Park showing selected musical films. Tomorrow’s is The Umbrellas of Cherbourg. 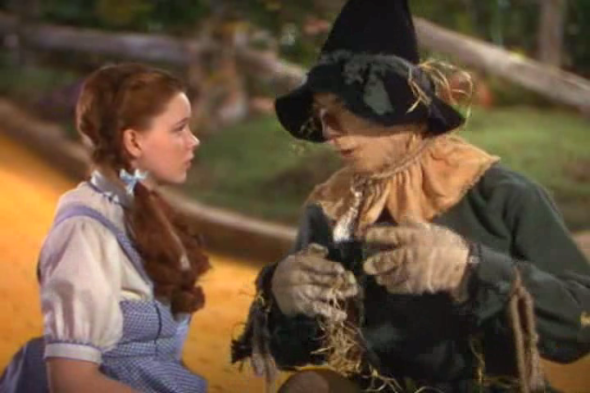 A film known for its memorable songs and emotional valleys, George Cukor’s 1954 musical remake of “A Star is Born” is also an effective parody of the Hollywood machine. Its circular events calendar and more circular narratives, lack of willingness to open doors, the 1950’s craze of finding the most groomed instead of the most able (I’m looking at you, Grace Kelly), vampire-like treatment of its talent whom they perceive as expendable, lack of respect for its talents’ privacy in dire times, absolute falseness,  exoticization of the rest of the world and disseminating that information into the American household, misguided and hateful press agents (Jack Carson), how it separates loving couples. I suppose Norman Maine shouldn’t drinking that much or that his problems aren’t caused by Hollywood, or that Esther Bloodgett/Vicki Lester (Judy Garland), but Hollywood still looks bad.

It also looks bad because Esther, one of its victims, has so much humanity and pathos. She gets discovered by alcoholic superstar Norman Maine (James Mason), and her soaring career coincides with his self-destruction. I can’t pick out her shining moment in the movie. While she’s in the car with Norman, she seems to belong to her big city present with hints of the small town little girl of her past. As she’s in between the musical movements of  “In the Trunk,” she goes from caramel-voiced actress then breaks out into song, holding back tears of joy and gratitude. In her dressing room, still in a jolly costume as an androgynous newspaper girl, she tells Oliver Niles of how she hates Norman for failing but says it with sorrow and remorse, and brings audiences to tears.

James Mason gets a moment too. It’s the last movie played in his retrospective, and what other way to end it than with his performance in this movie. Playing opposite Garland takes a lot of subtlety. But my favourite scene for him is when he ‘Kanye’s‘ his wife at an Academy Awards ceremony. He tells those who are attending the banquet that he knows them by their first name, convincing authority from a man who is there to beg. It’s horrible for him to do, but we still feel his pain. I also just inexplicably like it when actors stutter at the right moments. Both Mason and Garland play off each other well in this scene, even if they don’t look like a good couple in a few other scenes. And his “Why do you disgust me” in the first scene brings laughs too.

The movie’s a circular one, beginning and ending both in a Hollywood benefit show. Esther returns to the place where she met Norman, filling his place. She appears to her audience as Mrs. Norman Maine, positioning herself as a traditional wife, as one of Hollywood instead of just being a newcomer. As she belts out in one of her numbers, the show must go on.

Oh and if you like Mondrian, you’ll love this movie too.

A good ten minutes of “A Star is Born ’54” are just monochrome film stills accompanied. Those ten minutes seemed thrice its length, almost ruined the experience, I wanted to walk out and get my money back. I should have known that film executives cut it up because the original three hours was apparently too long by test audiences at the time. Thankfully the last inserted parts of the film ended by the 70th minute, and the meat of the film and its musical numbers are intact. I was eavesdropping other people’s conversations after the screening, women in their forties strongly saying that the stills added nothing to the film. I hope to hear the other side of the argument someday.

A Star is Born

I’m watching “A Star is Born ’54” today. I’ve seen clips/most of the movie, but it would be nice to finally see it in its entirety at 7 at the Cinematheque. I got my Judy shirt, I got my hat, I have money for an ice cap. I have never readied myself for a movie this much.

p.s. Son of a bitch. Apparently the power went out in sections in downtown Toronto. Please bring power back up!