The new movie adaptation of veteran spy novelist John le Carre‘s Tinker, Tailor, Soldier, Spy feels a bit quiet but that wouldn’t be a surprise because of its director, Tomas Alfredson, who made a vampire movie look sanitized. Although instead of snow and tiles painted with blood, he brings the same craftsmanship to London and Istanbul circa 1973. Unlike the more casual 1979 BBC miniseries, Alfredson and crew have the burden of making the movie feel distant from contemporary times. Old wooden furniture, soot-stained marble and stone buildings, MI-6 employees wearing sepia tone double-breasted vests, typing on dull green computer prototypes. I have a few issues with the tone, like the soundtrack in the beginning and the shadows on the actors faces but nonetheless, its’ an exercise in style in the best of ways, the formalism appealing because everything’s so toned and filed down, like a dull but blunt object.

Control (John Hurt) sends Jim Prideaux (Mark Strong) down to Budapest to get a codename of a mole who has been in the MI6 – nicknamed ‘The Circus’ – for years. The set-up goes awry and Jim dies. To redeem themselves from national embarrassment, Cabinet Secretary Sir Oliver Lacon (Simon McBurney) enlists someone from the ‘outside,’ cuckolded and ousted agent George Smiley (Gary Oldman) to pick up where Jim has left off. George differs in his approach to the matter, he’s not trying to lure some field agent overseas. Instead he looks within the agency, its paperwork and interviews of ex-employees, convinced that the double agent would try, and fail to cover his tracks at home.

This movie is the epitome of boy’s club but in the best of ways, as the story lets us into the group’s fracking façade. The infighting, as these middle-aged Received Pronunciation speakers bellow about how authentic each other’s stolen information are and the sources from which these files are produced. They end up accusing each other of being too old, too much of a wild card or too paranoid, leading to some dismissals from the agency. The next step, of course, is for Smiley and other agents to spy on each other. One of the circus’ mostly deluded yet loyal members is a woman, Connie Sachs (Kathy Burke). When Smiley ends her interview, she waves, saying along the lines of ‘If it’s bad, don’t come back to let me know.’

Loyalty is the biggest conundrum here. It lacks the showy-er elements of contemporary spy movies which is a deterrent for some audiences. However, the MI-6 of the 1970’s doesn’t need muscular action against its enemies and neither do their battles involve a weapon that can kill them all. They live in a world where agents cross the Cold War’s already fluid lines. This betrayal is sickening and perplexing enough to these characters although thankfully, George and his rogue allies are jaded enough not to fight while brandishing Connie’s blind patriotism.

I’m on the fence here – the more time elapses between that surprisingly exhilarating last shot makes everything else seem more like a passing flavour. Like an experience that immerse its audience then just as gradually lets them go. A few things stay with me, like Tom Hardy’s performance as footman Ricky Tarr, that burly man reintroducing himself and his voice as a wounded stray. Or Colin Firth’s modest expressions as Bill Haydon. The zoom-outs between two pillars as dread-inducing jet fighters fly through European skies and another one from Control hearing about Jim’s death. And the slow motion sequence in the conference room with Control’s suspects, Tinker – Percy Alleline (Toby Jones), Tailor – Haydon, Soldier – Bland (Ciaran Hinds) and Poorman – Esterhase (David Dencik). The pipe smoke lifting from their faces, their eyes mockingly looking at George the Spy, Control’s oblivious fifth suspect. Good movies are one that twists the mind.

Owning Mahowny is austere minimalist cleanliness in cinema. This approach is surprising since it tackles gambling addiction, and addiction of any kind is usually portrayed with either evil, grit or glamour. The titular Dan Mahowny (Philip Seymour Hoffman) walks around in beige-painted halls of banks, hotel rooms and airports or visit Atlantic City casinos that aren’t as loud nor distractingly colourful as other gambling places in other films. There’s also spectatorship at work here, as casino employees and patrons both feel greed and pity towards him. Hoffmann’s performance, accordingly, is unsettlingly stoic either when he’s working or sitting on the blackjack tables, losing millions of dollars in one sitting. He barely blinks nor breaks a sweat, his only way to know how to stopp is to endure a spectacular loss. With him is a great supporting cast including Minnie Driver and John Hurt, encapsulating Ontario and New Jersey cadences. 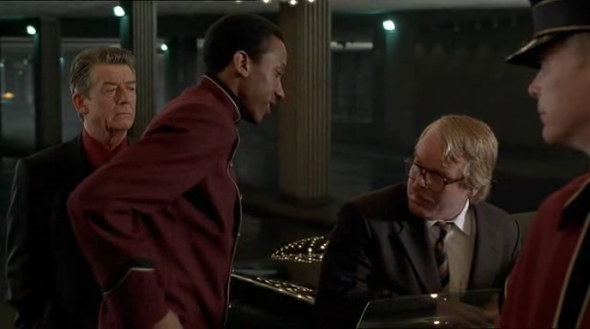