I’ve written about this year’s Hot Docs selections. Two of them are about the future in their own way – I Am Breathing and Future My Love, both of which I’ve written about in Entertainment Maven. The Other two are about how their subjects are trying to save the world. The first in the latter group is James Franco and Travis Mathews’ Interior: Leather Bar, which I wrote about for The Film Experience (link below). 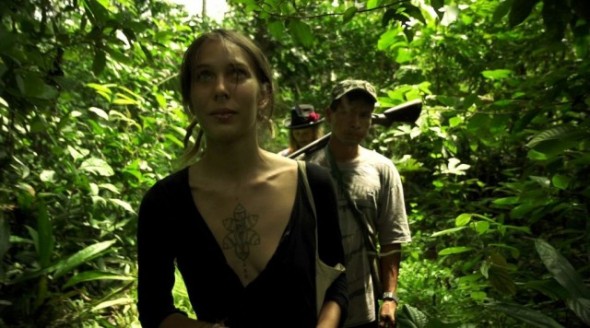 The second is Michal Marczak’s Fuck For Forest. I totally forgot that doc’s third Canadian connection. In the movie we see the titular group’s clashes against some of the people during the Berlin SlutWalk, a global movement that started when two Toronto police officers held a seminar in York University telling the co-eds not to dress slutty to avoid rape. Some of SlutWalk’s 2.5th feminist movement marchers sees FFF’s aggressively pro-sexual recruitment tendencies as anti-women, which is a totally understandable angle in seeing the former group. Click here to read my post on Entertainment Maven and judge for yourself if the doc – or my writing :S – gives these misunderstood idealists any justice.

I’m linking and recommending you to two websites that have Hot Docs coverage, because I write for both. The first is Nathaniel R’s The Film Experience (link below), where I write my first impressions on the Hot Docs line-up, intimidated by a few stand out movies that have too serious of subjects. Or at least that is true with some of the festivals’ opening movies such as The Invisible War and Outing. The former captures talking heads who have firsthand experience of the rape within the military while the latter is about a man who, at fifteen, discovers his sexual attraction to children. But there is a silver lining to the festival’s programs as I’ve discovered other, fringe-y subjects who look at the bright side of their imperfect circumstances.

The second is Entertainment Maven, where our friend Kirk Haviland has written a preview of the festival. He starts his coverage by reviewing Brett Whitcomb’s Glow: The Story of the Gorgeous Ladies of Wrestling. I share reviewing duties with him, starting with the Ross Brothers’ Tchoupitoulas, a movie sharing a name with a bustling street in New Orleans’ French Quartier. I’ve also seen Najeeb Mirza’s Buzkashi, about a traditional Tajik sport that’s raising Western eyebrows. I also have pending tickets about Tajikistan’s powerful neighbours in The Boxing Girls of Kabul. I’m sensing that my coverage is more international than I previously thought. I’m also looking forward to our co-reviewer Nadia Sue Sandhu who is bravely facing the James Franco doc, among others. This week will be tiring, as most scary fun things are.

I didn’t get to see a lot of movies from Hot Docs this year because of scheduling conflicts and other cluster fucks. This is not a personal blog so I’ll just go right ahead and talk about the whopping two movies that I did see as a plebe.

There are many similarities between Who Took the Bomp – Le Tigre on Tour and The Ballad of Genesis and Lady Jaye. They’re both a part of the late night screenings this year, both about experimental musicians who do need to be properly introduced to the viewing public who may not know about the genres and the musicians, both refuse to be elegies by showing their own brand of quasi-hipster happiness.

The first scenes of Bomp are shaky, not knowing the balance between performed amateurism and the band taking themselves seriously enough, but these  aspects of Le Tigre’s mission statement eventually merge. It’s like a Hello Kitty doll giving the finger, the film punctuated by the band performing its danceable tunes about feminism, LGBT visibility, etc. It seamlessly weaves through its characters equally showcasing each band member so it’s not just about lead vocalist/guitarist Kathleen Hanna, who has her long provenance. It’s also about the fans, like one who is memorably touched by Hanna’s kind words. 4/5. I should have given it a 3.

Ballad, however, is a film version of a shrine, showing home videos of a dominatrix/artist/musician Lady Jaye accompanied by voice-overs of her pandrogynous husband, industrial musician/artist Genesis P-Orridge. The dreamlike Lady Jaye can’t speak for herself, in her part within their strangest of couplings – they decided to undergo plastic surgery to look more like each other. But her image and Genesis’ voice is enough to make us feel the happiness of a person who finds his true love while on an impressionistic journey in finding his true self. 4/5.