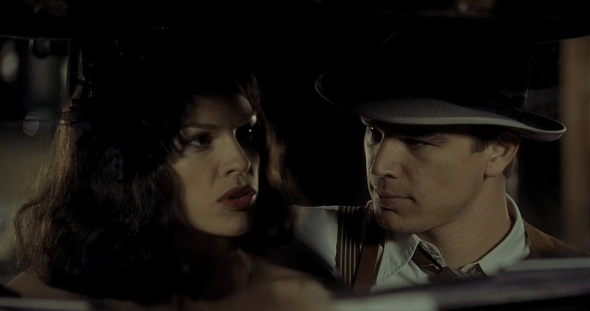 Most of Hilary Swank‘s roles have always toyed with ambiguous sexuality, but when she looks uncharacteristically feminine, she has to talk with some fake, upper crust accent.

Her character, Madeleine Linscott, has the blatant surname of an aristocrat and a given name that would appall Emma Bovary. She’s the fourth wheel in Brian de Palma‘s The Black Dahlia. This film’s plot is complicated even for a noir. The threesome between Dwight ‘Bucky’ (Josh Hartnett), Kay (Scarlett Johannson) and her husband, symbolically named Lee Blanchard (Aaron Eckhart) is interrupted with the real-life murder of Elizabeth ‘Betty’ Short (Mia Kirshner). As per the genre, Kay and Lee’s perfect, green lawn, post-war marriage is a façade hiding the secrets of their earlier, criminally involved lives. Bucky’s investigation also leads him to lesbian bars that ‘Betty’ allegedly frequented for money and pleasure, which led her to Madeleine, the latter is apparently Short’s doppelgänger even if she looks older. Madeleine condescends to the underworld, chasing Betty at first out of jealousy but eventually doing so in lust, in some way of trying to find herself through her mirror. 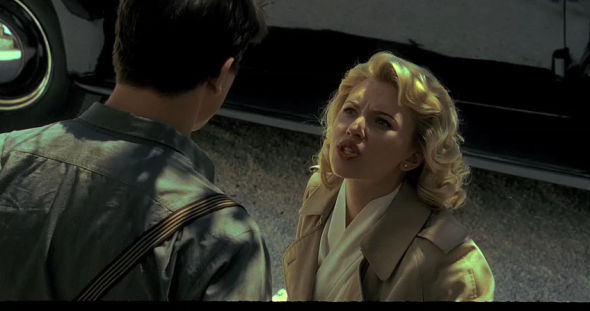 Of course, de Palma can’t help but tell his version of the story, reminiscent of the same camerawork that Hitchock gave up after 1948. In a way, his homages to his idol(s) make him (them) look bad and cheap. He also lets his players somehow simultaneously overact and limit their imaginations. Eckhart barks, Hartnett is bland. Johannson is the MVP here. Sure, her overtly expressive face is surprising, sometimes leading to laughably campy results. Yet she never leans on the sexuality that better directors world. She also evinces a lack of innocence that fits her character.

The Affair of the Necklace

In which I will use my armchair knowledge of film criticism and French history to write about The Affair of the Necklace.

I’m starting to blame Hollywood less for Americanizing any foreign narrative. If someone’s playing ‘let’s pretend’ in their backyard, they might as well play with the neighborhood kids. Hilary Swank, Adrien Brody, Brian Cox and Christopher freaking Walken are the last people the last people you’ll think about when you say ‘French costume drama,’ since they don’t make a lot of movies under that genre. But there it is, gnawing at the corner of their luck-filled and strangely eclectic CVs. She, playing protagonist Jeanne de la Motte de Valois, leads a cast of two Brits, an Australian and others who are mostly and blatantly too American for their roles, no matter how much they push their affectations to each other.

But I’m a nice, forgiving person and say that those affectations are a part of Hollywood tradition, another convention being the actors’ tight bodies which are a few sizes smaller than wealthy 18th century adult aristocrats. And the slow motion and soundtrack combination when something extremely devious or extremely violent is taking place. And stop trying to make the Illuminati happen, it will never happen!

The film Jeanne into a Scarlett O’Hara figure, she submits to the deceitful and decadent court life, getting herself into a plot to steal from Cardinal Rohan (Jonathan Pryce,as French as he has been before) who thinks is a loan for Marie Antoinette (Joely Richardson) to buy a diamond necklace the latter can’t publicly do so. But Jeanne will rationalize that plan, saying ‘I’ll finally get my home back,’ to her gigolo (Simon Baker) to remind us of it once every ten minutes that she’s a good person underneath. And I suppose we all are.

This film also exists to get Milena Canonero adequately employed, two of her three Oscar wins are from her work in movies set in the Rococo period. There’s one scene where de la Motte wears the same pink number that Kirsten Dunst’s Marie Antoinette wears. Canonero also works through fashions with de le Motte’s arc between a dour woman into the perfect yet classy seductress. I also remember mr e hats, veils and head-gear for de la Motte and the other female characters here than in Coppola’s film.

Which brings me to Joely Richardson‘s Marie Antoinette, my first time seeing her in a movie. Her brash force and dismissal reminds me of Cate Blanchett while her naiveté feels like 90’s Uma Thurman. I was wondering if the film considered Joely’s sister Natasha for the role but the latter doesn’t seem as gullible. She also looks slightly closer to the Vigee-Lebun paintings of Antoinette than Norma Shearer on Dunst ever does.

I also actually like how the film portrays Antoinette. I have a hazy recollection of Shearer’s Antoinette, but Coppola kept Dunst’s Antoinette away from the backroom, her most political decision is staying with her King despite the riots getting closer to Versailles. This Antoinette has her hand on the chess board, refuses the titular necklace because it was commissioned for her grandfather-in-law’s mistress Madame du Barry, overseeing the Petit Trianon’s construction, personally vindicates Rohan or decides a public trial about the necklace as if her husband the King isn’t in the same room. Joely’s Antoinette thus has a more active role in politics than the two more famous Hollywood depictions of her. But in compromises by showing the revolution against her and her beheading, just like the film shows everything we already expect in a movie about that era.

The film, choosing more conventional ways instead of going for an auteurial vision of the past, competent in telling its story. But after the credits roll, we can always go to wikipedia and find out that real de la Motte wasn’t a Valois, that she was probably killed by debt collectors instead of royalists and become severely disappointed that she looked less like Swank and more like Karla Homolka.