I’m probably breaking some privacy honour code by telling everyone that me and Andrew Kendall have an electronic correspondence. He revealed just as much before. Anyway, in these e-mails he revealed that he has seen movies that he hasn’t bothered to write about or to publish. I intended to write the next few posts to encourage him to start on those posts or press enter on others, but I think that I needed that motivation myself. I’ve actually finished writing these like six weeks ago but I haven’t pressed enter myself, or vowed not to until the number of posts I had on Tumblr has threatened to exceed the ones I had here. Well, that day has fucking come.

After he has sent the e-mail, which was in August, by the way, he already reviewed a few on his list, including Bachelorette and The Five Year Engagement. I haven’t seen both even if I’m pretending to like the former and I’ve downloaded the latter. He’s also seen Steven Soderbergh’s Magic Mike, Whit Stillman’s Damsels in Distress, Josh Trank’s Chronicle, and Jennifer Westfeld’s Friends with Kids. Chronicleis also a 2012 favourite of another Andrew who is close to my mind, Andrew Parker. Check both people’s reviews out! So anyway, 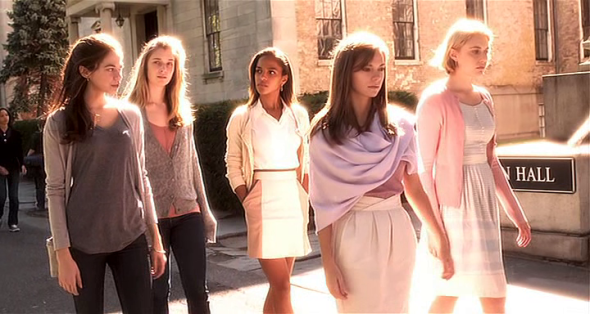 I missed Damsels in Distress during TIFF and its theatrical release. The dialogue here is infuriating yet familiarly hilarious, especially since it’s coming from Greta Gerwig, who is both sunny and robotic as this myopic overachiever. Her performance as Violet easily comes in as one of the best…forty performances in the past two years. A leader of a suicide prevention group in a college, Gerwig’s character Violet recruits Analeigh Tipton‘s character into the former’s fold. Stillman’s dialogue leads to some good laughs, mostly derived from Violet being unable to grasp regular American colloquialism. One of my favourites again reminding me of Dogville, when Tipton asks Gerwig whether the latter was being arrogant. The sun perfectly hits the two characters as they walk down campus, ironically and intentionally brightening what could be a passive aggressive conversation. One of this year’s great acting moments come from her when she defends her group to that smarmy guy from In the Loop/”The Office” sounding both like an affected fool and a wounded puppy. 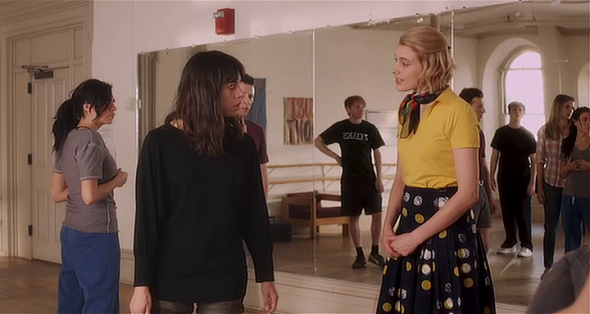 After being awkward in Crazy, Stupid Love, it’s also nice to see Tipton playing a normal girl. She tiptoes the lines of condescension although that doesn’t stop Violet of accusing her of that anyway. Her supposed normalcy eventually disappears as she hangs out with Violet too many times and adopts the latter’s unshaped ideology. Tipton’s character, however, isn’t the only one who changes since both she and Violet meet a ‘playboy’ (Brody) in a college bar that looks nicer than most college bars I’ve been to. The movie’s quirky tone doesn’t hide the fact that it’s probably just about which girl will the playboy hook up with. The movie also stars Audrey Plaza and Heather Burns as Violet’s projects, the latter more enthusiastic and malleable than the other.

So the new Natalie Portman film No Strings Attached, her first outing after her probably Oscar-winning turn in Black Swan, is facing mediocre reviews. ‘It’s predictable!’ ‘All romantic comedies are predictable!’ ‘You’re a terrible person, Paolo!’ Ah, shut up. Yes, I concede that the movie gets crappier the more I think about it. For example, to my future children reading this – if you don’t cry or show emotion at my husband/your father’s ‘stupid thing’ of a funeral, but you cry for a guy, I will disown you. Nonetheless, I will give this movie a bone or four.

The cheerleaders in Adam’s (Ashton Kutcher) “High School Musical” esque show actually did high kicks. Like real cheerleader stuff. I can’t remember if they did stunts or flipping though.

There was a total of one realistic sex scene. I agree with Ebert that the multiple lead-ups to Adam and Emma’s (Natalie Portman) first consummation was pathetically ‘code era,’ and that their hair never fully get messy, but when they got there…Oh God, talking about realism in sex scenes in ‘film criticism’ is harder than anything else I’ve ever had to write. The aggression and the connection and hand-held camera capturing a long take and Emma’s (Portman) head practically buried in those pillows. Also, is that Kutcher with a normal person’s body? Congratulations to him. I imagine any other actor working out to the hilt if he was cast in this movie.

Natalie Portman’s relationships with male characters in her other movies aren’t necessarily romantic, and you can’t even say that about older, more respected actresses. She allows herself to be coupled in this film, and I’m one voice who believes that Kutcher and Portman make a decent onscreen couple. Also, her calling Joy and Lisa (Vedette Lim) ‘pumpkins’ is classic.

There’s also one scene with Adam and Lucy (Lake Bell) who bump heads while trying to kiss. I can’t remember the last time I saw that.

The supporting characters. They’re really letting Abby Elliott as Joy nail a Drew Barrymore impersonation? When the trailer was out around Christmastime (someone correct me on this), I thought that the movie was built around Adam’s line ‘You fight like a hipster.’ The film now seems like a free-for-all for the comediennes and actresses with or without comedy films under their belt. We probably have Portman to thank for the girl power, whose project includes producing female stoner movies and has Executive Producer credits to this film. Mindy Kaling’s trash talking humour, her character Shira telling Emma that she’s going to avoid her for being so depressing. We have Greta Gerwig successfully convincing us that her character Patrice is more sexually desirable than the then awkward Emma at one point in their lives. Other actresses include Talia Balsam, Olivia Thirlby, Lake Bell (playing neurotic middle management) and Olivia Lovibond, the latter two’s comedic talent were probably aided by the fact that this movie is my introductions to them.

There’s also Kevin Kline, playing ‘Great Scott’ Alvin or Adam’sfamous TV star dad, who almost steals the show through both the physical and delivery aspects of the comedy. 3/5. 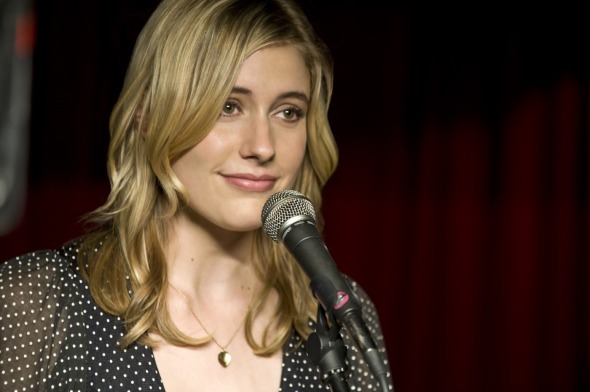 The first few minutes of “Greenberg” play like a lost Hal Ashby, watching Florence (Greta Gerwig) walking with a dog. It isn’t said if she’s a born Angeleno or if she moved from somewhere else. She straddles the line between smart and ditzy, having the same, almost drowsy voice that girls in their mid-20’s have. She’d be a full ditz if she didn’t have the indie girl look. She has a decent nightlife and sometimes has gigs in bars, crooning about the prairies. I live in Canada and I’m up to here with prairie shit and I didn’t know white girls sang about the prairies down there too.

Then Roger Greenberg (Ben Stiller) comes in to house sit and dog sit for her brother and the mood of the film changes into a portrayal of one bad date into another between Florence and Roger. “Do you remember they played Albert Hammond when it’s raining.” “You like old stuff?” For some frustrating reason she still comes back to him despite warnings from her best friend, who knows from Florence that he’s been in a mental institution, saying “If you see him again, I’ll stop talking to you.” Most of us would say the same thing.

For a while the movie veers into unwatchable territory. Some people have to be prepared for this kind of movie. I wasn’t – this is my first Baumbach. But at the same time, there’s an integrity in showing Roger mistreating people and accusing people of parental issues and people having awkward conversations and having really awkward sex.

The romance between Florence and Roger isn’t cookie cutter at all and it delivers a message that there’s probably no right person for anyone. Metaphorically, the two of them are different pieces of the puzzle. One thing they have in common except for their disfranchisement, which we don’t often remember because they clash so much. But in finding each other, they have to make it work.

There’s also honesty in the multitude of voices in this movie. There’s Florence, there’s Roger’s acerbic humour, there’s Roger’s college age niece and her friend calling other girls sluts. All of these portraits are brutal but not denigrating. When these voices clash, it could be excruciating but it’s, again, honest enough not to have the distance to make those characters hilarious – we empathize with them instead of being entertained by them. Most of the time we’re stuck with Roger’s, but despite how infuriating his personality could be, he is right about a few things and right about calling them out. His best friend (Rhys Ifans) shouldn’t go back to his marriage to a racist woman, it is annoying when people treat public spaces as their living rooms, and what is up with Florence’s ironic Girls Gone Wild story?

P.s. Saw this at the Varsity. I had to change seats because some old guy kept dropping sunflower seed shells on the floor, people kept their iPhones on to navigate through the dark theatre for their friends. Two fratboys in white T’s kept whispering to each other (I couldn’t hear him but a guy with a girlfriend yelled at them at one point), and finally walked out telling everyone in the theatre that the movie was fucking boring (they may have a point, but they didn’t stay ’till the end). These fuckers should have been filtered out after the second week but there they are at week 5. It’s both strange and comforting that Ben Stiller + Artsy movie join forces together and are still standing after a month. But again, apparently not everyone’s cup of tea.

P.s. Speaking of not everyone’s cup of tea, here’s a review from my friend’s friend, Julien.