The French: Exit Through the Gift Shop 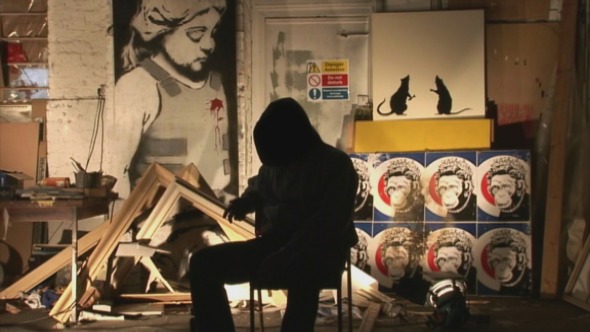 “Exit Through the Gift Shop” has two subjects. The first one is Thierry Guetta, a Frenchman who moved to Los Angeles into his adulthood so the accent is still there. He makes a living by buying warehouses full of crap clothes and turning them into hipster vintage that sell for hundreds of dollars a piece. He also videotapes everything that’s happening in his life. This obsession on documentation roots on missing his mother’s death, presented and effectively pulling on heartstrings.

Thierry’s cousin is graffiti artist Space Invader. For some reason he videopates the latter doing his so-called work, and eventually does this to other graffiti artists like Shepard Fairey, known for the Obama Hope poster.

Then Thierry finds his way to videotaping the second subject of the documentary, Banksy. Banksy’s career turns from art terrorist to the prized artist whose work completes art collectors. I swear I’ve met girls who will turn into the woman collecting ‘the Banksy.’ He wanted to make Thierry’s footage into film because he was probably tired of the stigma of being called a mere ‘tagger,’ nor did he wanna be a pawn in the game played by Sotheby’s and the champagne class.

In a way this film elevates Banksy into a legitimate, unique artist. I mean, he deserves it. The subjects of his work are original and witty. Banksy, without knowing the consequences, advised Thierry into art, having a hand in making the latter into a commodity machine of bad art by creating pedantic work.

This movie typically makes Banksy look good by making someone else look bad in comparison but then a) Banksy doesn’t seem mean but is actually protective of his genre, b) he calls Thierry a friend and sees sympathetic sides of the latter’s one-track but devoted mind, c) his once democratic ‘you can do it’ attitude is radically changed and now he knows only to encourage emerging artists to improve their form and method instead of encouraging them to just do whatever, and d) I have never cringed at artwork the way Thierry’s work has made me.

At the same time I don’t completely buy the argument that despite his lack of method Thierry’s work is is moronic. For argument’s sake, the artwork stands as its own text and a viewer’s interpretation might be more important than the author’s intention. Another version of this argument is that rubber was made by accident, but a good accident indeed. Thierry’s specific representation and repetition of the Marilyn hair pasted on other celebrities, suggests, with or without intention, that all celebrity is repetitive and wants to emulate ‘celebrity’s’ golden age. We see the emulation of Marilyn through Madonna, Chuck Klosterman’s awful assessment of her, notorious photo shoots of both celebrities and models posing as her, biopics both past and in development, etc. He’s just commenting on that.

Most art before late Rembrandt was repetition. Before him, everyone was making copies of what the classics made or what their fathers have handed down to them. They fuck it up all the time, which makes things more interesting, but we can’t call every era as one that radically pushes the border of art since most of what happened in a century is a baby step from what happened before them.

As mentioned in the beginning of this post, Thierry made a living turning shit into gold and is doing the same thing here. The film tells us that Thierry made a million bucks through his ambitious show. As Banksy admits, that must mean Thierry’s art works.

And you can say the same thing about Banksy. He turned what is still an illegal art form into something legitimate.

And now I kinda want Banksy to do a documentary on Thomas Kinkade.