Christoph Honore’s Man at Bath features cruelly volatile characters, focusing on a French gay couple falling out of love, mostly because Emmanuel (Francois Sagat) rapes his boyfriend Omar. Omar gives his boyfriend a week to move out of his apartment, which is convenient since he’s going to New York for film work with Chiara Mastroianni. The film then shows scenes of Emmanuel hooking to earn money to Omar picking up Dustin, a young Quebecois/Al Pacino lookalike to scenes when the couple are in the apartment. We’ll assume that it’s Emmanuel imagining his boyfriend in that space, both connecting sexually.

There are some good things. Like there’s no hint of subversion in Sagat’s emotionally versatile performance or that singing indie rock before sex is actually cool or Emmanuel having sex with three different guys in his soon-to-be ex boyfriend’s apartment might just be the best revenge ever. But are these characters depicted with distance or self-awareness? That could have saved the film, as well as some editing and organizing the plots from priority a, b or c. 1/5.

Before the main event, there was a screening of a short called The Lady is Dead, about a heavily made-up old woman watching LGBT men and women of all shapes, two of which are twinks who weigh exactly like my right thigh. 2/5. 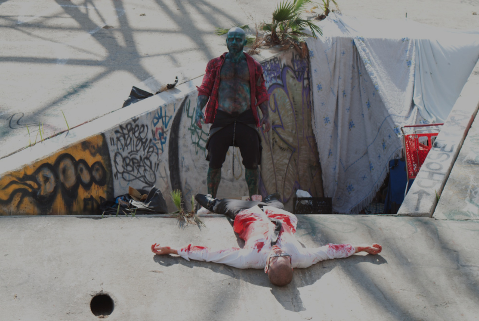 An alien zombie emerges (Francois Sagat) in the form that whoever Supreme being created him, from the Pacific Ocean and walks his way to the beaches of L.A. There’s three versions of this monster. There’s the alien zombie version of him who penetrates dead men with the former’s whatever it is in the latter’s man-made orifices – I hope I’m understood. The homeless version of him, cured after intercourse with the dead men – he regresses into the first version although he eventually controls his transformation between these two stages. The third version looks like the first, but the latter watches the former have sex with dead sadomasochistic muscle heads (including Francesco D’Macho, Erik Rhodes, Matthew Rush) and this third version has bigger fangs. Portions of the film accompanied by Chopin’s violin concertos.

The two coexisting versions of the alien zombie are, according to him, open to interpretation. Every text is open to interpretation. There are many intentionally disappointing things about the film. That he can’t fully commitment to any message is my biggest disappointment. The film has its fashion connections, from Bernard Wilhelm’s deconstruction designs to a cameo by Santino Rice as a homeless drunk. I gave this movie a 1/5, and I felt good doing it.