(All entries with the heading of ‘TIFF Cheat’ indicate selections from said festival that I couldn’t watch during the festival’s run.)

Lebanon can be separated into two parts. The body of the film is  when we see the film through the eyes of young gunner Shmulik, the new addition to the now team of four young Israeli troops in a tank nicknamed Rhino. The other team members are Asi the irrational commander, Hersel the trash talking loader and Yigal the driver, an only child with elderly parents. 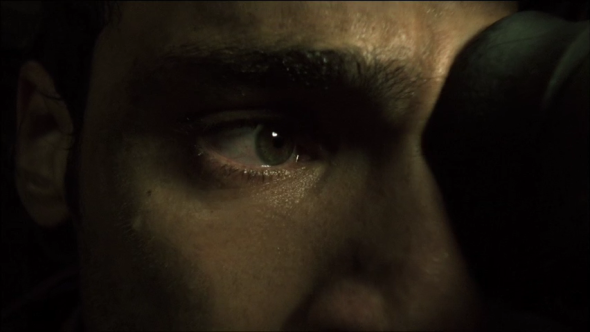 In Shmulik’s job, he has two options – to kill and cry about it later or not to kill. He does both and fails, either action leading to the deaths of those they’re attacking either from his hands for someone else wearing his uniform. The other men in his team accuse him of shooting or not shooting at the wrong times, and they’re arguably right.

He says he’s tense. He quivers at the sight of destruction left from the day before, and in his defense, he has to look at the destruction caused the day before and he sometimes gets the feeling that the people and animals he’s looking at, alive or dead, look back at him and know his presence inside the tank. The Air Force has attacked a Lebanese town the day before, and the tank’s job is to ‘clean up’ the town. Gamil tells the crew that the clean-up is swift and easy, a promise that, the audience knows, is not kept. Shmulik’s periscopes close-up to disturbed copies of Christian oil paintings that used to hang in people’s homes, followed of course by a woman who lost her daughter, stripped because of a fire in her dress.

In the final act of the film, Shmulik doesn’t share the point of view of the movie, the camera instead is shaking because of a Syrian attack. There’s less light than the earlier parts of the film. The camera closes up on the four young men and their different reactions and futures.

In general, the film hints at the different fates of these men too easily. But with that we also get the most TMI story of a father’s death, a strange act of kindness, and survival with a subtle deus ex-machina. A solid multi-character study all around.