I’ve seen some movies and fewer great ones in the past week but the word love is for Drop Dead Gorgeous. I don’t even know why because most critics think that it doesn’t deserve that word. It forces us to believe that the overdeveloped Denise Richards is the same age as the film’s star Kirsten Dunst. The equally overdeveloped Amy Adams makes her début here too and, as a cheerleader, is playing a personally relatable character, if you catch my drift. It also seems humiliating to watch Will Sasso‘s character be repeatedly called a ‘retard.’ That Amber Atkins’ (Dunst) tap dance number wasn’t as electrifying as it was the first time I saw it. And her ascent to the national beauty pageant is just as suspicious as Rebecca ‘Becky’ Ann Lehman’s  (Richards) win at the town-wide level, the latter competition of course rigged by Becky’s mother Gladys (Kirstie Alley). Of course Amber’s innocent but even the good girl never deserves the ‘great’  level that she achieves. 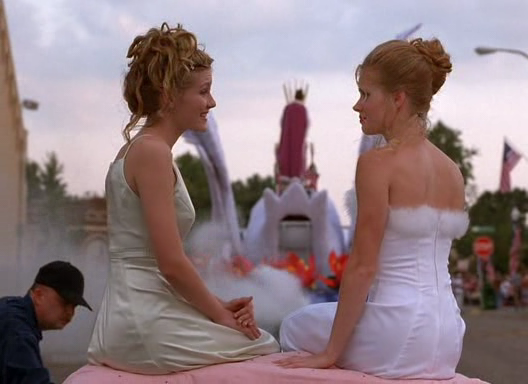 But it’s still enjoyable to watch Dunst in her signature glee, making every movie of hers watchable. But her Amber also has a mean streak towards Becky and ever her own idol Diane Sawyer so she won’t seem insipid. Or Alley, at the time relegated to supporting work for the Olsen twins, comes with her venomous performance and over-the-top accent that of course, the rest of the female-dominated cast has. Tony winning talent like Allison Janney and Ellen Barkin also howl their way into the film, being featured in a movie that doesn’t deserve them, only to prove that they can go to the extreme without seeming smug. And this film was part of my ‘indie’ upbringing, one of those movies playing on cable in the early 2000’s. Richly nihilistic, mean-spirited, campy and excessive, it’s confident and defiant in its badness.