This recreates my mental state three days before Valentine’s Day. It ain’t pretty.

A conversation I had with a critic – the same person with whom I was discussing Dragon Tattoo – eventually got us discussing Jason Reitman’s Young Adult. I agree with him, it’s a zombie walk where hack writer and man stealing slore Mavis Gary’s (Charlize Theron) converses with her high school co-alum Matt Freehauf (Patton Oswalt) as a way of Diablo Cody talking to herself like, pardon the comparison, Ingmar Bergman with hoodies and home brewed whiskey. It’s only energized by Mavis’ blood curdling speech at the end. A villain’s tirade before leaving an all-American environment – in this case it’s Mercury, Minnesota, a small town provenance she’s seemingly outgrown – and her departure typically resulting with the other good-natured characters hugging and keeping their relationships intact and so forth. That speech is one of the elements within the movie that riskily decides to side with Mavis despite her being an intentionally terrible person and I give brownie points for those things.

His criticism against Young Adult stems from how it tries to both mock and pander to opposite sides of whatever line the movie draws to divide Mavis from the other characters. There’s the use of “Kourtney and Kim Take New York” among many uses of pop culture to either make fun of lowbrow culture, the working class reassured that the middle class is more pathetically trashy. In short, condescending to both classes but mostly to the townies who don’t even know what ‘the TV’ is. Keep in mind that it’s screenwriter Diablo Cody doing the finger-pointing, funny enough because she has appeared on the E! Network as well as being engaged to someone who works there. Also keep in mind that I watch and secretly love “Kourtney and Kim Take New York.”

It’s like a rom-com making fun of Katherine Heigl like Friends with Benefits does. It’s equally hurtful when an intellectual like Woody Allen makes fun of us. But Young Adult shows my reflection pointing back, a flawed conceit that my reflection is an ugly mean girl AND Charlize Theron. The rich make fun of us whether they’re classy or trashy and I still feel ambivalent knowing that these masks of class, education and breeding are in place against others. 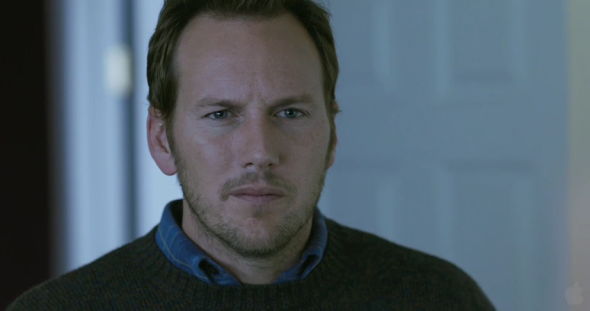 What he also finds smug is something that, despite deeming the movie passable, I also could never make peace with – she’s one of the unique cases who, despite being love struck, only chooses one target for her supposed goodwill if at all. Why is Dolce-clad Mavis still holding out for Buddy Slaide (Patrick Wilson), who has unkempt facial hair, wears thick plaid jackets without being ironic and works in a factory? Just because Patrick Wilson has cheated on his wife in many miniseries/movies doesn’t mean he’ll cheat on her for you this time, Mavis. I don’t even know if he has sex drive in this movie at all.

This perpetual high school reunion one-upmanship happens all the time. Someone created the Twitter handle @FriendFromHS for this purpose. Or like what I used to do during the first year I joined Facebook – I’m trying to forget that someone else might be doing the same to me – and laughed at how this guy got fat and so forth despite not being able to find my man who got away who by the way is straight. I should actually do that now because looking at him will make me feel good about myself, hoping he finally signed up.

Oh my God he got hotter.

And I don’t care if he’s the kind of guy who takes pictures of himself in his bathroom without closing the shower curtains, holding the camera in his hand in front of the mirror because he can’t figure out how to use the timer, accessorizes with cubic zirconium bling and befriends girls who spell ‘sexxxy’ or ‘chineese’ (He’s white. Aryan, even). His face is in the same immaculate state when we were both young, belonging to better clothes and a svelte body.

If he blocks me, I wanted to write the typical ‘I hope you’re not offended by the past’ thing. But I always had a speech prepared if I see him. That there have been others after him – ‘after’ despite him not reciprocating in any sense of the word. That I thought he was the one and that those others made me feel lost, that I didn’t know what love is when I fell out of my infatuation for him. But now that I can see him again that changes everything. I could have pressed enter and told him everything, making me seem crazy if I didn’t have a friend to stop me.

The artist is someone who insists on content, form and image – especially image’s importance – despite others perceiving it as unapproachable. Her present is everyone else’s past, she views it as nostalgia but others perceive it as stubbornness. She performs this past ad nauseam but never tires because of its comforting rituals. She’s a risk taker in her eyes but that doesn’t matter if the others see madness or chooses not to see her at all, their rejection making her lose everything. This creation or dedication is caused by love and some conceive love, giving into love and to another person, as containing destruction. Love forces a person to change for the other person, to create herself anew, making her lose her individuality. But love can also be an instinct against outside forces and this form of stasis could lead to the same destruction she’s been trying to avoid.

Sorry about that insanity, although I wanted to talk about that. It’s been a long time since Young Adult came out, but what I remember from its criticism is Mavis as an unsympathetic character or her place within the movie’s class boundaries. But what about her character’s mental state? Most movies about the insane are pretty self-centred, the other characters are either supporting her convalescence or driving her to madness. We see the other characters through Mavis’ warped prism, blocking them, their relevations of ‘I feel sorry for you’ seemingly tacked on and coming out of left-field. Are we not seeing her mental condition because she looks like she has her shit together or am I using her state as an excuse? Buddy’s wife gets a whiff of her condition and I don’t know if it sticks. And her presence within Mavis’ peripheral vision causes for new lines to drive up between them, making the movie problematic.

P.s. I still haven’t added him yet.

Juno, its eponymous hero and the actress who plays her, Ellen Page, probably have slightly maligned reputations by now. The movie and character would be seen as aloof and jokey despite of her pregnancy, and the actress almost got typecast as the leading star of the indie pack. My ‘job’ is to tell you the readers that there’s much more to the film. I caught this movie four minutes in, and Juno’s in real distress, convincingly telling her best friend (Olivia Thirlby) on the other side of the hamburger phone that she’s a ‘suicide case,’ revealing her situation. But yes, she does deliver on the humour, so relax. It’s eight minutes in and she’s already covered pop culture references and ironic ebonics, and sells her lines efficiently. She understand exactly what she’s experiencing, by this part of the movie anyway. And there’s her and the movie’s conundrum during unexpected pregnancies – the slightly depoliticized choices of keep, adopt and abort. When she chooses to give up her child for adoption, she has to deal with the new characters as well as ones already in her life.

And no, the characters in Juno don’t all talk alike, with their different rages of old, conservative – both gentrified and not – Americana and new, snarky Americana. Even bit parts have their own ticks, just like every human being in a fictional universe like this one we live in. A lone pro-life protester who shouts that all babies want to get ‘bornd,’ or a goth, sexually active receptionist. 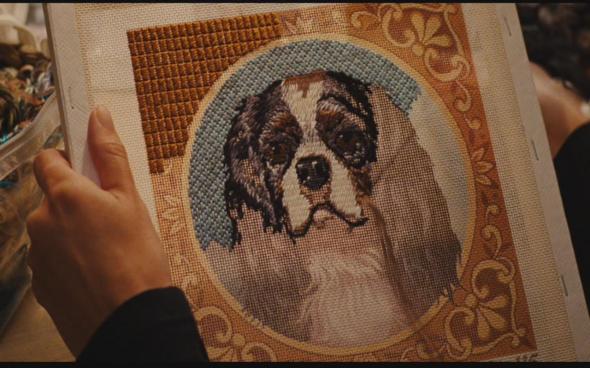 Speaking of quirky, there’s a bit of focus on the characters’ material possessions and moments of privacy. I already mentioned the hamburger phone. There’s the discarded living room set, the picture of prince Charles in Juno’s cheerleader best friend Leah’s room, love interest Paulie Bleeker’s (Michael Cera) maroon and yellow outfit combination while he’s putting deodorant between his thighs. While we’re at Paulie’s shorts, by the way, let me just say that yes, cinematographer Eric Steelberg isn’t Wally Pfister nor Roger Deakins, but correct me if I’m wrong, he did bring the most eye-popping movie in an otherwise sepia tone year. Brenda’s (Allison Janney) obsession with dogs, adopting prospective Mark Loring’s guitar. Again, my fascination with these objects root from my boring decor. Mark’s wife Vanessa’s (Jennifer Garner) contradiction of bourgeois chrysanthemums and Alice in Chains tee are given the same light of individuality as the possessions of the working class characters on the other exit on the highway.

Yes, Bleeker’s a nerdy jock anti-stereotype and Leah encourages her best friend’s new sexuality yet still cool enough to join a rock band. However, the movie has clichés. Product placements. Juno’s short body trying to walk opposite everyone else’s direction. Juno’s stepmom Brenda warning of something that’s gonna happen and being right. Speaking of which, I would like to congratulate the internet for not ruining the movie.

Despite her wit, thank God she isn’t always the smartest person in the film, where the adults also show her things that are as she says ‘beyond her maturity level.’ She has her flaws. She crosses the line with the people in her life, using the word ‘gay’ – Leah does too. Page is nonetheless amazing in this, giving more than expected for the role. There’s something even in the way Juno runs up the stairs to the bathroom that shows how inventive and physical she is in a role that’s more script-based. If there is a flaw to her performance, it’s her voice that usually isn’t this nasal. She also ends most of her snarky lines with a lower tone, reminding me of how a younger Jorja Fox would speak. 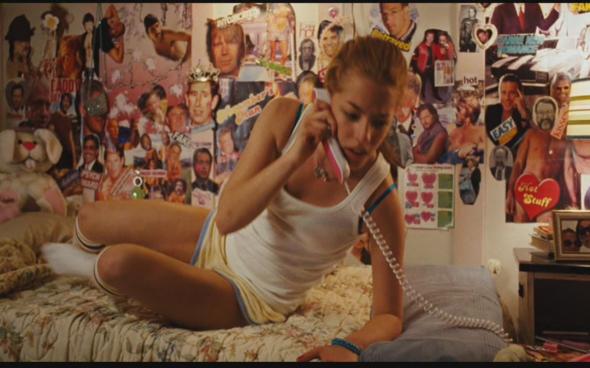 And who says the women’s picture is dead? Diablo Cody sprinkles her script with well-written female characters. As Leah, Thirlby supports her and moves furniture for her. She also does the best readings of the word ‘pants’ and ‘I know, right’ in the history of cinema. Vanessa’s slightly frosty demeanour ventures for need to have a child with sane amounts of caution. Janney plays Brenda as a sap with a Kristen Wiig outfit yet knows how to eviscerate anyone like she does in “The West Wing” in probably the film’s best scene. All three equally convince the audience that they’re the best parts of this movie in their moments onscreen.

The male supporting cast does wonders in this film too. J.K. Simmons as Juno’s dad Mac reinvents himself as the balanced, supportive parental cool from whom she gets her sense of humour from. Bateman as Mark Loring tries his best both to support his wife’s wishes to adopt while holding on to the youthfulness that Juno’s sparked within him. Cera knows how to convey anxiety only through his eyes – his face doesn’t move but it doesn’t need to. And despite seeing her at her worst, Cera’s Bleeker gives her the moment of tenderness when she needs it. 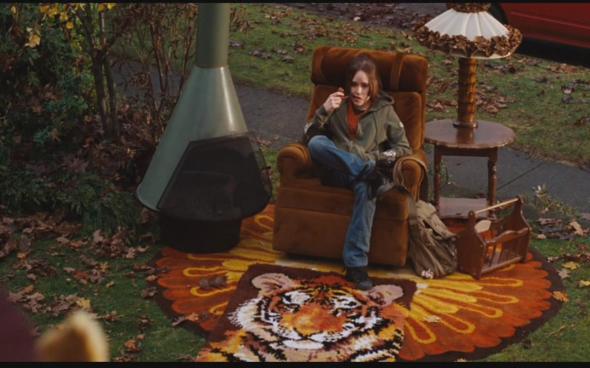 The trailers on the DVD include 27 Dresses who co-stars Jonathan from “30 Rock,” The Savages which I should have seen instead of Sweeney Todd and a digital copy promotion thing that ties-in with promoting Live Free and Die Hard.