Black Swan fits director Darren Aronofksy’s other work, with an obsession with the body and performance, close-ups of Nina’s (Natalie Portman) feet and ballet flats being warmed up. There’s CGI, grainy digital photography, and uncompromising close-ups of her face. Like other Aronofsky’s protagonists, she embraces quick success without anticipating her antagonists, like rival Lily (Mila Kunis), choreographer Thomas (Vincent Cassel) Nina’s mother Erica (Barbara Hershey), and all the voices in her head.

The actresses also do great work here. Portman interestingly interprets her character as a virginal girl without confidence, panting at every step, obeying Aronofsky’s pendulum swing vision of her character. It’s probably the first time I’ve seen Portman attack cruelty in its basic form, scratching and clawing away at herself, as if a demon is possessing her. Kunis is smooth and elastic as she dances and seduces everyone, deserving the Marcello Mastroianni award she got this past week.

The inconsistent characters, are my big complaint. I don’t mean the other dancers’ double pronged admiration and bitchitude, from what I heard normally directed to women from women. I’m talking about malleable Nina, mentally unready to become Swan Queen, despite having a ‘flash’ of it in her. Or how the ‘prick’ Thomas still has his job. We are perceiving them through Nina’s warped state of mind, but I’m not sure if that’s justifiable enough. The film’s ending feels invigorating, but still, 3/5.

p.s. Just realized that the douche-y blonde guy from Hot Tub Time Machine is one of Nina’s dancing partners.

Requiem for a Dream

My first encounter with this movie was in my college years. I thought it unwatchable, seeing all those slouchy junkies dancing and reveling in intoxication, wanting neither pause nor redemption. It’s something, at that time, that touched a dark, personal part of me from which I wanted to distance myself, so I had to change the channel. But this is the kind of movie you get if you wanted realism, and there’s a demand for that.

And that relentless soundtrack. I’m pretty sure there’s only one or two-minute intervals of dialogue or silence between pieces of powerful music. Ironically enough, I’m sure that a track called ‘Marion Barfs’ (under other names in the soundtrack) is now being used to promote televised sporting events.

I do find the rapid cuts and extreme close-ups and split screens gratuitous in other examples. It almost was here. The shots of eyeballs and syringes bored you until another season/act comes and we find the characters deeper into a more interesting section of the rabbit hole. Also, my pet peeve that there are windows with no views here too, noting that this is still cheaper, independent film making despite of its achievements in other areas. But the characters and tragedy, reaching their inevitable ends, are effective enough to overshadow the flaws.

I cheated on a Sidney Lumet double bill to watch this. Had I seen this in its entirety a few years ago, I would have dismissed it as a jewel of turn of the twenty-first century film making like “American History X.” And “Requiem” is still that – I never thought to call a movie made ten years ago would be slightly dated. Last Saturday I was ready, and in doing so I treat it neither with love nor hate but respect.

I’ve always seen movies where Jennifer Connelly was the damsel in quasi-distress (“Little Children,”). I know that there are movies where she plays the unconventional reincarnation of the femme fatale (“House of Sand and Fog”). In this movie she refreshingly plays both. There’s also Nick’s argument that Jennifer Connelly did subtler and thus better work than the Oscar nominated Ellen Burstyn, which I respect and kinda agree with. Nonetheless, Darren Aronofsky works his players like athletes. 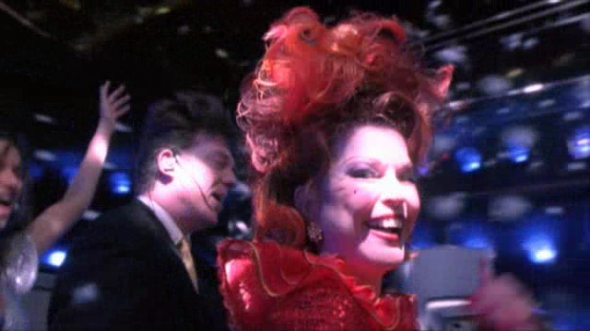 This movie is the middle ground between Aronofsky’s grit and trashy (“The Wrestler”) and the fantasy (“The Fountain”). So far, it’s the movie that best embodies what the rest of his work is like, although his best is yet to come.

This movie can also arguably be the gateway to the boyish Kubrickian surrealism that embodies the movies of the past decade (Mexican New Wave etc.). But then “Memento” apparently came out three weeks before this movie. Apples and oranges. I haven’t seen “Memento” in so long so I can’t choose which one’s my favourite.