This is not what the trailer promises, with its piano music softly trumpeting the titular substitute teacher Monsieur Bachir Lazhar (Fellag) – hired by headmistress Mme. Vaillancourt (Danielle Proulx) – who shows and paves for his impressionable students (including Sophie Nelisse and Émilien Néron) the magical road towards higher learning.

Surely his presence in the school would mean some healing for these kids, especially the two who have seen their previous teacher’s body. Right?

Monsieur Lazhar can also be known as Bad Teacher, his minor flaws putting into question our traditions and cultural understanding on who and how to raise our kids.

Many of his colleagues and some of the parents relish to remind him how terrible he is at his job. Good God there’s a lot of passive aggressive workplace verbal exchanges in this movie.

And these body check-size words hint towards the cultural barriers that separate Bachir from everyone else, tiptoeing on saying that he doesn’t belong in the classroom.

The first comes from the child psychiatrist, telling him that his classroom needs colour. Every other classroom in the school looks like a Treehouse TV set.

He tries his best to emulate the other teachers, hoping to get inspiration by entering one of those classrooms as if incubated in a cutesy alien civilization. He buys a plant that dies because he doesn’t water it.

But as a child from across the seas, I actually prefer his very Spartan arrangements – desks straightly aligned, little to no decorations. He believes in learning above playing, and a good smack upside the head to a child who deserves it. The later is problematic, I know.

Another teacher tells him that it’s sad that he doesn’t think that his students have an interest in his life. This coming from somone who incorporates her travels in her lesson plan, assuming that he must have a lot to say about a faraway land. 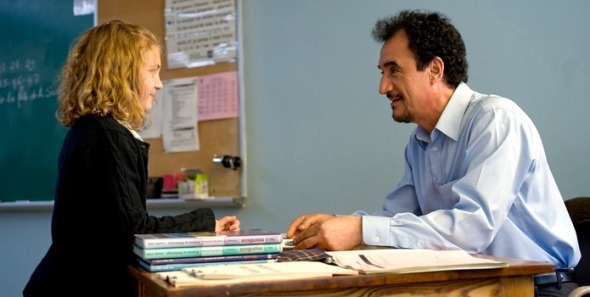 I see in Bachir, an unlikely advocate for French-ness, a bit of an Uncle Tom. He teaches Balzac and Moliere instead of elementary school level readings. He educating the kids in proper grammar and teaching them big words. He tells his one Mediterranean student to stop speaking in Arabic and to speak in French instead.

All of this is ironic because assimilation is a philosophy drained into immigrants, welcoming their new home while their hosts find traits within immigrants to other them.

But most people just want to a taste of the exotic. They want to hear, as he concedes, an image of Algiers as a city of blue and white.

But what about the scars produced by a dangerous land, as he has experienced? He thinks Algiers is an inappropriate subject, a topic he has to deal with in court appointments, associating his home town with a family separated from him because of the Algerian Civil war.

Seeing his difficult life outside the classroom, his assimilation complex, although a character flaw, becomes understandable.

He also wants to treat these children like adults. As much as he doesn’t like discussing his wounds, he lets his students have an open space where they can talk about theirs.

In a way, the children mature and are able to deal with trauma, a state of being that scares some of the children and most of the adults.

And the most emotionally wrenching and devastating thing about this movie is not the loss of innocence produced by horrific incidents. Falardeau effectively shows us in this Oscar nominated movie how barriers, cultural, personally built, or otherwise, stops the characters from the healing that they need.