Macaulay Culkin’s acting chops at the time is him mugging for the camera, and is nothing compared to the ten-year old child actors we have today. Joe Pesci is delightfully not a ham, and whatever internet snark anyone may have for this being his Norbit is unfounded. Oh hai, John Candy! Why are there no black people in this movie? The guy playing Macaulay’s brother is not the most attractive child. The script isn’t pedophile proof, with mentions of his older brother ‘pounding’ him. 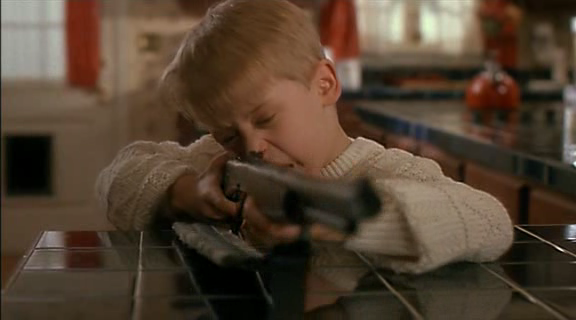 Also, that child is really immersed in American gun culture. Of course, I wonder how verbose the last 30 pages of the script are. the words ‘I’m gonna kill this kid’ is just as effective as the f-word. The film is an interesting perspective of how a child brushes off fear. Both children and the adults in the film expose their fears especially about families and homes. His family is terrible, using numbers instead of names for counting the children. Weak grocery bags suck.

This is my snappy write-up.

So watched this movie last week at the Underground, had some spiked apple cider, met Sasha, entered raffle, not win anything from raffle. Also, there were short theatrical and musical performances. The former from the Underground staff, the latter from a band with a front girl who sounds like Feist. Thanks girl, I was rooting for me being the hottest person in that room.

I remember the chair scene, I remember a mall instead of a department store. The sequel probably ends in a mall. I haven’t seen the sequel since my childhood.

Apparently the gremlins is black. Stripe with his mohawk doesn’t register as black to me. I guess their ‘blackness,’ in a ‘Renaissance’ perspective of the word, has something to do with the second rule, as light can be seen as whiteness, something that the gremlins can’t live under. The gremlins don’t even register as Chinese, since the parent gremlin does come from China. Ok, thinking about the raciality of the gremlins almost made my head explode. I was this close to comparing them to ‘Muslims,’ or at least how ‘red’ America perceives them.

Nonetheless, the racial reading of the film roots from that despite Christianity’s strength, there’s still an anxiety that Christmas, in its ever-evolving form, won’t be celebrated ‘traditionally,’ whatever our understanding of that is. On that note, maybe it’s not a racial but about generational differences, that the multiplication and transformation of the gremlins are the fault of a curious, young man.

Why is the school open on Christmas Eve? The science teacher wouldn’t have died if he didn’t work. I guess it builds on the childhood assumption that teachers line in school. For some reason, schools in Reagan-era America actually had enough funding to indulge their teachers to make their own research and the facilities that go with them. Also, ooh, black on black violence.

Also, the retired Phoebe Kline nee Cates. She made Jessica Alba seem like a Shakespearean actress. 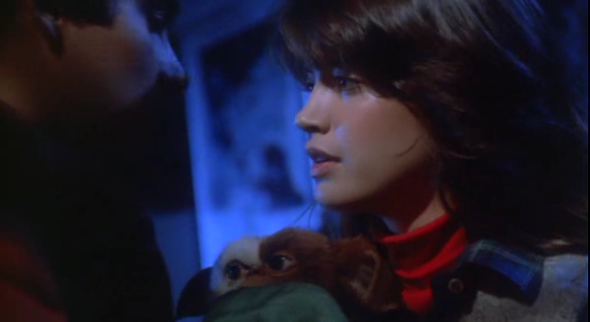 Bruce Willis is just like Jennifer Aniston – both were in sitcoms but did art on the side. And yes, I just called Die Hard art. Yes, there are a few things that I appreciated from this crowd pleaser that played at the Bloor Cinema on December 15th. The print they played is obviously not a reprint, making the Los Angeles sky look reddish. And no, I’m not complaining.

Both Officer John McClane (Willis) and Hans Gruber (Alan Rickman) find themselves on opposite ends, Gruber trying to forcibly take $620 million in bonds from a Los Angeles branch of a Japanese company, John trying to stop him. They behave in this film and try to defeat each other like walking blindfolded, and this they make the best foils for each other.

Hans accuses John of the latter comparing himself to John Wayne and Rambo, but he’s performing too. This is probably just me putting 1988 in context with 2010, but is Hans loosely based on Carlos the Jackal? Kicked out from his terrorist group, has experience in Germany. Something always goes wrong with their plan, which only John’s wife Holly Gennaro McClane notices. Besides, what kind of terrorist owns a ‘John Philips’ suit? (p.s. I’ve never heard of this designer, I’m not familiar with London designers who weren’t CSM freaks. Anyway…)

He’s stealing from a corporation that’s trying to help infrastructure in the Third World. While making demands with the FBI, he tells them about random terrorist groups imprisoned around the world, including ones from Quebec, which got a rousing reaction from the Torontonian crowd. About an Asian group, Hans privately tells the right hand man that he’s heard of them on Time Magazine. When he faces John for the first time, he pretends to be an American.

Nonetheless John’s journey into this story’s more fascinating because well, it’s funnier. It’s hilarious to watch his face wince and repeat ‘Think,’ a sign of a man in panic. Besides, Bruce Willis probably knew how to say the lines better than the other actors whom the movie was offered to.

In the film’s first scenes, John tells the other characters how ‘he’s been a cop for eleven years’ or that he has a backlog of scumbags he has to put to jail. I suppose I’m being unfair, hinting that his bravado can’t possibly prepare him for what’s to come. However a) no one knows how to prepare for terrorism and b) even he knows that his victory against them would be miraculous, but that doesn’t stop him from trying. Another condition to his challenge is that he begins it by simply wearing a wife-beater and is barefoot. A constant variable in his process is various stages of undress, while a less constant variable are the weapons he gains and loses throughout his exciting mess. He’s practically a video game protagonist.

He actually does something interesting in the beginning – he escapes, retreats and tries to spy on the terrorists. He bungles up a few things while he’s away from all the action, yet despite the accusations Hans throws at him, his invisibility is the opposite of performance. He makes sure he’s away until he has to inevitably meet the villains.

The film is also well thought out in a technical sense, as Mark Hasan writes here. There are also the showcasing of heights – ‘I swear I’ll never be in a tall building again.’ – the most real explosions in film I’ve seen in recent memory, non-CGI helicopters flying around a real city which will never happen in a movie again…

Of course, John flies all the way to Los Angeles is to meet his wife and hopeful resolve issues about their marriage and her career. She’s not the only woman there, but she’s second in command. I was ready to roll my eyes in what I thought the ending was gonna be. ‘You’re so hot and shirtless John McClane. I’m going to give up my career and cook bacon and eggs in a sexy French maid outfit for you. Take me!’ Which is exactly what I would do if Bruce Willis married me, mind you. Anyway, I thought I was going to be right because eventually John, in trying to rescue the hostages that include Holly, unintentionally contributes in the destruction of her workplace. Holly has two obvious choices now,  move to New York with him and finding a job will be difficult because her references are dead. Or stay in Los Angeles and ride the publicity train. The two don’t talk about it, grateful just for being alive. If it’s any consolation, she’s very assertive in trying to protect her boss and coworkers. She gets to call Hans out as a thief, and Holly’s the character who makes the film’s last act of aggression.