(Finally saw this after putting it off for three months.) 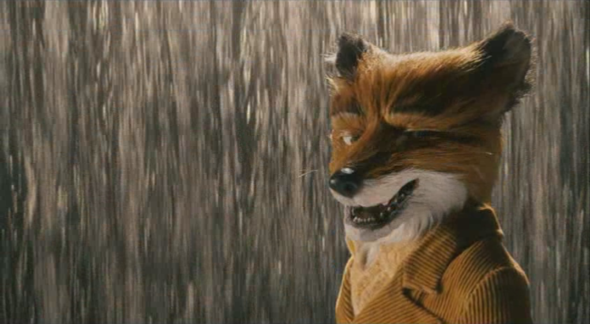 (Mr. Fox is getting a reality check. ph. sectret)

I hope my opinion on this movie doesn’t stem out of a bias towards kids’ pictures, and that if by chance I hated this movie I would have been like those people who hate children and have no souls. At the same time this might not be considered a kids movie because Wes Anderson’s voice seeps it movie so much. At the same time adult themes seep into other media targeted for children (Flintstones), and as my old-enough-to-be-parents friends can attest, sarcastic language and tones have been prevalent in children’s media in the past decade.

The first moments of the film did delightedly overwhelmed with cuteness, but nonetheless, the Wes Anderson influence within the narrative was distracting in the first half (I have yet to read the book, and apparently it’s better for someone who writes about film to read the source material). I wanted something universal, and I wanted to see if he could make a film that has different themes from what he’s used to. I couldn’t see both aspects of kids movie and Wes Anderson movie together.

What probably convinced me to were the performances. This movie probably has George Clooney’s best performance of the year. He’s familiar with the heist-y, witty, fragmented masculinity and he’s familiar with these spins on the genre (Soderbergh). Behind the animation is someone perfectly conjuring a character with explosive excitability.

And his leading lady comes to task. I can’t believe I’m admitting this to the internet, but Meryl Streep almost made me cry in that movie. Her character and performance is more motherly and isn’t as fierce and combative as the other female characters in Wes Anderson’s movies (Anjelica Huston comes to mind). She even comes off as motherly in the first scene when she and Clooney portray a younger couple. But she does scratch his face, and it’s hinted that her character has  a mysterious past.

Michael Gambon is also enjoyable as always, and Willem Dafoe disappears into his Rat character. And if you’re wondering why animals in n English countryside are speaking with American and Southern accents, I let it go.

What also caught my eye was how textural and sculptural the film is. The hair and the fur on the foxes’ faces, the detail of every set created and the gorgeous scene in the sewer waterfall added to this movie.