Ghibli: “Laputa” and “Spirited Away”

It’s difficult for my mind to stray while watching Hayao Miyazaki’s movies, especially the bombastic sound work in Tenko no Shiro Laputa (the English title is Castle in the Sky. Laputa is an unfortunate title if you know a bit of Spanish but we’ll use it for brevity’s sake). I’ll never forget the dimensional feeling of the air crafts. But as the characters started to sink in I realized that I grew up with anime, especially ones that portrayed ‘Western’ narratives. This cross-cultural storytelling is interesting in the visual sense. I know the young arms catching Sheeta from the air, starting their puppy love – are just plain slabs of white meat between penciled borders but somehow I felt the characters’ sinewy qualities on-screen.  I also like its accuracy, capturing how the European build is more muscular, dense and square shaped although that’s probably just my ignorance talking.

Also, older women such as Mama are booby but not in a sexual way. Speaking of which, the sexuality in Laputa is a bit disturbing, as Mama’s crew are metres away from preying on Sheeta although they do blurt out the subtext that the innocent-looking Sheeta might grow up to be a good witch like Mama. But it’s not just about the human characters, the robots and the plot also showing how Miyazaki influences Brad Bird and Chris Miller. Puss in Boots also has the same plot and imaginative spirit but the latter tucks in and lets out. Think about it. 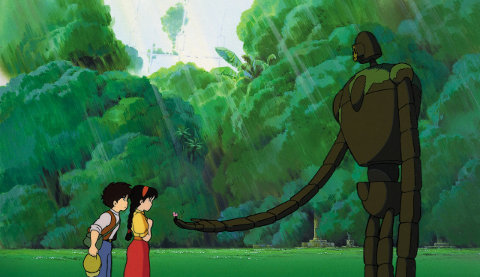 Spirited Away begins with a family uneventfully moving into the smaller suburbs, makes a detour to what looks like an abandoned amusement park and turns into a ‘introduction to work and adulthood and its pitfalls’ metaphor. It also shows more slender Asian bodies in Chihiro and the other cynical bath house servants she joins. It’s a more Japanese narrative but that doesn’t mean that European visual tropes are completely absent. Chichiro’s father has the same stocky European build before he and his wife eat the amusement park food – where are the guests? – and magically turn themselves into pigs. The Mama lookalike of a matriarch, Yubaba, and her overgrown baby almost turn the exception into the rule, as well as the visitors of Yubaba’s resort for the gods, spirits and monsters, most of them looking like characters from Where the Wild Things Are. I’m not saying that Miyazaki relies too heavily on Western influences as he also includes river dragon gods into the mix and actually makes these characters, whatever they look like, into his own. 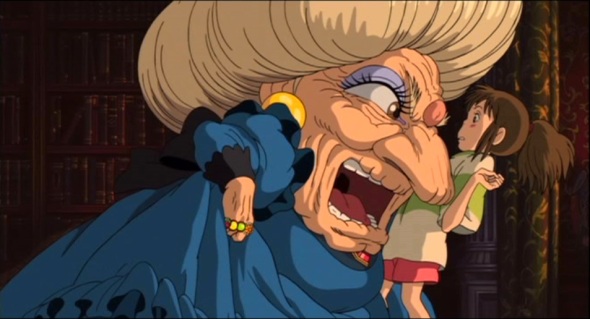 I’m also probably in the minority that likes the simple structure and the complex characters in Laputa although I do admire the consistent menace of Spirited Away‘s matriarch. I also like Laputa‘s three different visual textures while depicting the landscapes. Spirited Away, however, also marks a digitized aesthetic, especially in depicting objects and characters moving through vegetation. What does make the latter film special, in an Berlin Film Festival and Academy-award winning way, is its unrelenting and inexhaustible imagination, introducing more fantastical creatures and mises-en-scene like the hand lamp greeting them after a trip on a train that crosses an ocean, coming just after me thinking that Miyazaki must have run out of them.

Yes or No: MI – Ghostocol

Like other series in this blog “Yes or No” is ripped off Nathaniel. It also won’t last long because I just see the good and the bad within movies instead of seeing what switches the movie could have made. Brad Bird‘s Mission: Impossible – Ghost Protocol is one of those rare cases where the thing that can make the movie better is already within it, it just needs highlighting while pushing the boring parts out. With….

Yes: Action sequences. Especially the first two which are immaculate pieces of cinema, starting from when Agent Hanaway (Paul Gross lookalike Josh Holloway) almost gets away from the bad guys. Then we get to when our hero, Impossible Missions Force Agent Ethan Hunt (Tom Cruise), escapes from a Russian prison with the help of a few friends. I apologize for conflating them but they just have the same spirit.

These scenes have the greatest acting in the movie, from Lea Seydoux as Sabine Moreau – more about her later – to the goofy way Simon Pegg‘s IMF Agent Benji Dunn says ‘sorry,’ to Cruise actually pronouncing ‘Bogdan’ (Miraj Grbic) properly. It also took me days to realize that I was listening to Eminem, the perfect background music to Cruise punching out Russians of both hot shirtless prisoner or armed guard form.

It’s a surreal adrenaline pumping dream where there’s a tiger behind every door, or in this case an enemy behind every turn, back alley or hallway. These remind me of video game levels, Bird’s animation training translating so well in hyper-reality. If only he could have sustained this energy. Sure, that sandstorm was ballsy and visually ambitious but the movie hurriedly goes from one locale to another, making these changes feel forced.

Yes: It’s sad that Seydoux as Sabine is an afterthought in some of the criticism I’ve read. How else can a relatively unknown actress magically transform herself from an idealized young lover Midnight in Paris to a sashaying gunslinger in this movie? Sabine is an assassin getting paid with diamonds, which is a hilarious, borderline sexist stereotype by the way. But her reptilian yet graceful demeanour, the way she literally bears her teeth while exclaiming ‘Tuez-le!’ is what I look for in a beautiful yet scary woman If there’s anything I love, it’s an actress’ dedication to camp even in a secondary role.

No: Auteur-izing an actor here, but Jeremy Renner picks characters who obsessively follows esoteric, self-inflicted honour codes brought on by the post-traumatic, stressful, working class ‘modern’ masculine condition. His character, ‘analyst’ William Brandt, is one link more helpful in saving Ethan’s life in that thrilling Burj scene. But he’s so negative, nagging his teammates during missions and constantly picking fights with then. Is this who we want to spend two hours with in the new MI movies?

Yes: Instead of William, Agent Jane Carter (Paula Patton) seems more of a deserving heir for Ethan. Since she and Hanaway were an item, both she and Ethan are kindred spirits in the ‘I lost love for this job’ cliché. She also hides her pain during missions most of the time. And there’s also something about Patton’s performance as a woman in the field, never seeming vulnerable like the way other movies present women. Her bone structure doesn’t get in the way of her being occasionally worn down, not caring which angle makes her face look better.

This is especially true in the Mumbai scenes. Ignore that image where she bites a cherry so seductively that it’s cartoonish. It’s probably her biceps talking but it seems like she’s wearing her slit green dress like an athlete, revealing skin for a public appearance but she stops being that ‘feminine’ once she’s in a more private place.

Yes and SPOILER: Mrs. Julia Hunt (Michelle Monaghan). Monaghan is a great actress and a national treasure just like many actresses who broke out in the mid 2000’s and are now stuck within girlfriend roles and worse. I’ve spent most of this post praising this movie’s women. I think I’m straight. 3.5/5