Since the titular institution in Frederick Wiseman‘s Boxing Gym runs for 24 hours, it would be right for the film to have, structurally, a cyclical and impressionistic feel instead of having an arc. We see the Austin-based gym owner interviewing new applicants. Yes, the gym has its share of professionals and attractive ones – which might motivate someone like me to keep going to a gym, honestly – but the most captivating ones are the amateurs. The owner talks about how the more braggart newbies are the kind that never stays, tell a young mother that her newborn is safe in his environment and ask a young. He also asks a college age applicant whether the latter is joining just to beat up a man he doesn’t like.

From his applicants we see that the owner is pretty hands on by training some of the members are running some creative strength and cardio classes himself. In one scene, a mother, while binding and gloving her son’s hands before training, shares how the owner has helped her in her boxing stance. Another scene showing one of the cardio classes is the most visual in the film. Start just after sunrise, the yellow-brown bricks making up the buildings of Austin depicted like a de Chirico painting, the class running up and down a grey multi-story parking lot closer to the downtown core.

Wiseman captures these people learn to box on their own. The film closes up on the members’ backs while throwing punches in the air or their feet while a timer intermittently goes off in the background, latently providing the film’s rhythm. Some of these scenes and be considered as endurance tests for say, a five-minute long scene just showing a member’s sneakers. It’s reminiscent of what Jake Cole said in review of Darren Aronofsky’s Black Swan, especially with watching Nina Sayers practice her multiple spins without Tchaikovsky’s piano music nor a partner. It feels awkward watching these boxers in a private dance in their own heads, although most of the time there’s some spiritual and communal connection to the space even when these people are alone. 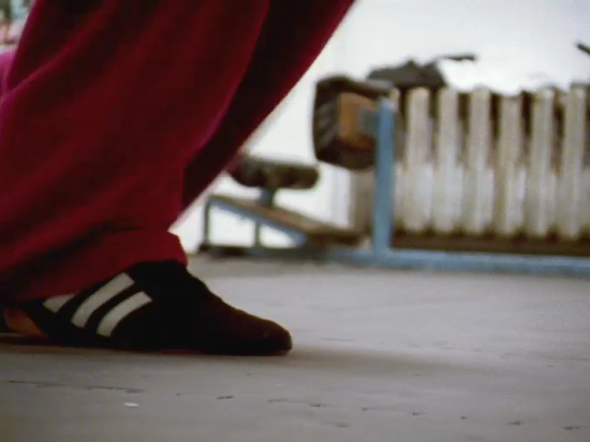