2012: Happy Iranians Are All Alike

I already reviewed Argo here but below are some thoughts.

If you follow me on Twitter, you would have noticed that I was making fun of Ben Affleck’s Argo even before I saw it. But sitting in the theatre, its first few images are storyboards just like the ones in the fictional science fiction film that was never going to get made. And those boards reminded me of Persepolis. If you’re a smug liberal with an HBA in English Lit, you’ve probably breezed through Marjane Satrapi’s autobiographical graphic novel about the early years of the Islamic Revolution. And I find myself saying shit like “Obama, Bibi and Harper shouldn’t put sanctions on Iran because nobody understand Iran like I do!” Ah, to have been rich enough to visit pre-Revolution Iran, or Afghanistan before the Soviets came, or Iraq before Saddam sold out and turned his country into a Terry Gilliam movie (Also, looking up Baghdad on Wikipedia makes me want to visit it). Nobody understands the Middle East like I do. (Also, can someone hook me up with the sequel, please?) 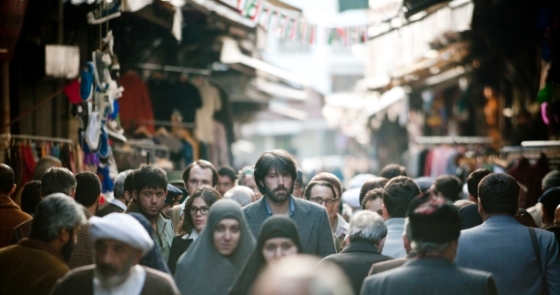 Persepolis and Argo have two major differences. Unlike Persepolis, Argo has a clearer outline of the power transitions within Iran decades before the Revolution. I’m not faulting Satrapi for this. Yes, there are references to Iran’s general history of conquests and a fictionalized account of the Pahlavis’ rise to power, but it’s more naturalistic that a fictional version of her ten-year old self not to have known who Mossadegh was. he second major difference is that Persepolis shows the perspective of a young Zoroastrian girl. Argo, however, just assumes that there are two kinds of people in Iran – the people of indeterminate faith who want to leave and the crazy Muslims beating on the American embassy’s doorstep. 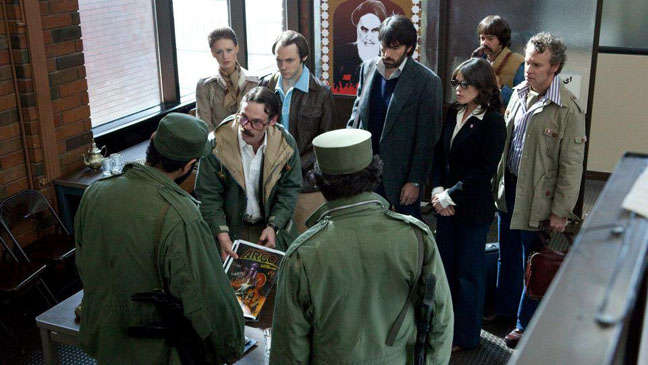 Argo is a clown car of character actors but for me it has four MVPs. The first is Clea Duvall, who plays Cora Lijek. Duvall is an alterna-teen post riot-grrl sensation and is my spirit animal. In other words, a poor man’s Chloe Sevigny, but better. In one of the dinner conversations in the Canadian embassy (why did Canada have to shut that down? I smell fish) she actually defends the Revolution’s perspective in a way that Pahlavi shouldn’t be granted asylum in the States and should face a trial in the country he oppressed. The second is Sheila Vand, who plays Sahar. I mistakenly thought as a ‘ethnic girl,’ this was her acting debut and that she’ll never get a role like this again. Actually, she has played de facto Iranian intepreters in a pre-Homeland Damien Lewis show in NBC, a soft-core porn model and a pot smoking rebellious teenager. The third is Scoot McNairy, a mane that David Foster Wallace would have had fin with he the latter was still alive. Yes, he was a whiny little bitch for most of the movie but he redeems himself in the airport. Of course, my choices of MVPs imply that I prefer the Tehran storyline over the Langley/Hollywood ones, despite of how good John Goodman is, my fourth MVP.

Isn’t today Guy Fawkes day? If yes, then those guys are doing it wrong.

Yes, The Town is a masochistic Boston Tourism film. Also, for some reason, screenwriters today have to add vulnerability or worse, neediness to get two unlikely people like career bank robber Doug MacRay (Ben Affleck) and assistant bank manager Claire Keesey (Rebecca Hall) into a relationship, especially since the former robbed the latter. Thankfully, ‘rebound from a bank robbery’ is better than ‘he’s so gruff and masculine,’ the former being an assessment that Claire’s off-screen friends have given her. I didn’t hate it as much as Dana Stevens, despite having the same gripes as I do.

This movie also reminds me of LA-set film Set It Off. Spoilers: Desmond Elden (introducing Owen Burke) is Kimberly Elise, Gloansy (Slaine, rapper?) is Vivica A. Fox, Coughlin (Jeremy Renner) is Queen Latifah – for more than one reason apparently – and Douggie, as his ex and Coughlin’s sister Krista (Blake Lively) calls him, is Jada Pinkett. Yes, I know the main cast of Set it Off by heart while I had to iMDb the names of the robbers in this movie. Also, for some reason, with a lust-worthy cast that also includes Jon Hamm, I thought Burke was the cutest. My working class east-end formative years really screwed me up.

And yes, Hall and Lively’s growing talents are no match for Gone Baby Gone‘s Michelle Monaghan and Oscar-robbed Amy Ryan, but then arguably the women in this film didn’t get to do much. But for some reason, the men in this film are better than the male veterans in Affleck’s first film. Hamm and Renner gave great soliloquies that seem more convincing than Morgan Freeman and Ed Harris.’ The ‘we’re gonna get you’ or ‘I took you in’ that I would normally hate in other less-polished scripts. The camera somehow also makes their close-ups dimensional, thanks to DP Robert Elswit. Affleck’s head and neck bobs are still distracting and his delivery is the weakest of what is still a decent bunch of male actors.

The film’s last job takes place Fenway Park, reminding me of the big urban settings of the 70’s urban crime films that it’s been compared to. If there’s anything close to revolutionary about crime/action/western films – not saying this film is a western at all, by the way, so calm down – it’s how a film lets the audience see and hear guns. Not a gun expert here, but the weapons are bigger and badder than I remember them, the lower interior of the stadium muffling the gunshots, firing dozens of rounds a second, breaking the edges of SWAT shields. The casualties also look more realistic, when a man’s face swells after being hit in the cheek, looking like the old photos of gangster crime scenes.

In a conversation that occurs when Douggie visits his father Stephen (Chris Cooper) in a federal pen, the latter destroys the former’s perception on his supposed ‘angelic’ mother. In a way, Stephen touches on Doug’s perception of women. Claire and Krista are both Cressida, betraying their man. the consequences for Krista aren’t spelled out.

Doug also knows that Claire has betrayed him, yet he isn’t cruel to her. He doesn’t point out her betrayal since he has lied to her just the same. He also gives her two gifts, understanding her decision and maintaining his perception of her ‘angelic’ nature despite of what she’s done. The Town doesn’t have the character and moral ambiguity of his earlier effort, but Doug and his treatment of women are good enough for me. Maybe, knowing this about him, his doomed relationship with Claire isn’t unconvincing after all. 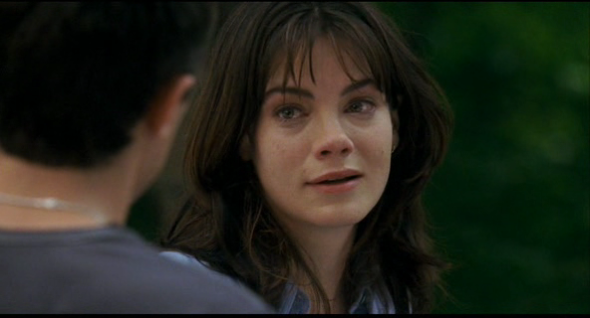 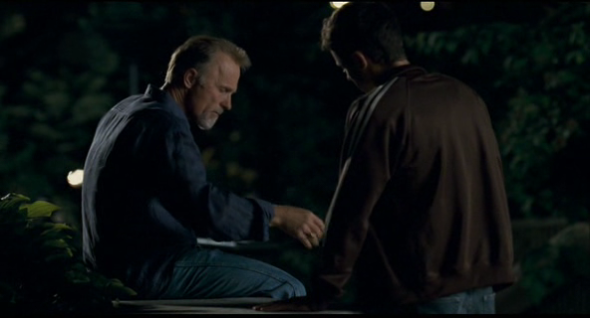