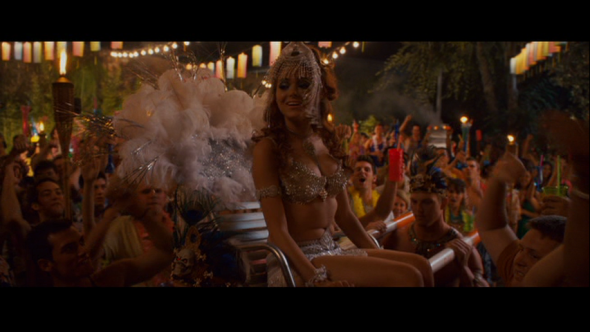 The House Bunny is the only movie that allows Anna Faris and Emma Stone to share the same screen and since the movie views women to Faris’ standard, Stone will probably never get this naked and Mean Girls-y again. Shelley Darlingson (Faris), being last out in the orphanage (the movie pays lip service to this part of Shelley’s character which, to be honest, is all it needs), always thinks of herself as an outsider even though she has one of the most coveted jobs that conventionally beautiful women have, a job that some of those women use to stab each other with. She’s grateful and has a sunny perception – she says something like “It’s like being naked in the centre of a magazine and people unfold you!” – about her precarious place within the mansion, as a 27-year-old she sees herself as 59 in Bunny years. After being schemed out of the Playboy mansion, Shelley becomes house-mother to Stone’s sorority house – the Zetas – although both mentor each other, the former with knowledge about how to attract men to help them save their sorority house and the latter knowing how to attract a man who isn’t superficial (Colin Hanks, obviously son of Tom). One of the movie’s funniest montages involve her trying to smarten herself by reading many books at once in a library and going to senior level classes in which she’s not enrolled. It reminds me of one of the movie’s earlier scenes where she asks one of the girls from a rival house where all the desks are. Both scenes are, to my limited knowledge of the subgenre of frat/sorority movies, the biggest indictment of college culture in cinema. 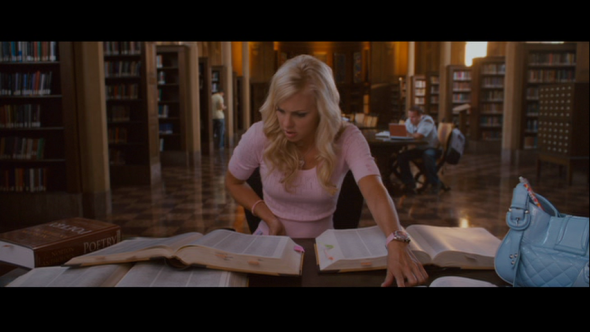 Stone, like her other housemates (Kat Dennings, Katherine McPhee and Rumer Willis) go through two makeovers. The first, through Shelley’s guiding hand, takes too long to set up. The second is when one of the Zetas tell the other that they’ve become as superficial as their rivals. Stone’s character soberly advertising Zeta’s mission statement as being about acceptance is how we’ll see her onscreen persona in future rules. 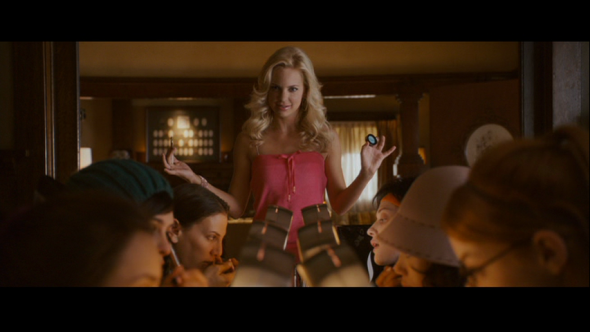 Even if Faris and Stone are regarded as underrated comic gems stuck in a cinematic era that treats them like shit, the former, a secret national treasure and a celebrity impression that some cheerleaders have in their comic arsenal – is good but not enough to elevate this movie. There is absolutely no reason for everyone to watch this movie or to call this as a comedy – but then I read a lot of complaints that contemporary mainstream comedy isn’t funny so I guess this movie’s first few scenes might fit in with that description – and I felt the same way until I heard Faris’ voice get deeper and more guttural because that’s the way Shelley remembers names. I’m immature and get amused by stuff like that – it’s actually the first thing I’ll remember with this movie, the ‘erythromycin/meteor’ soliloquy in the end being the second. OHLIVEHR! That voice, simply enough, makes Faris’ Shelley a physically straining, full-bodied performance. You can call it as Faris putting the wool under our eyes but I still like it. 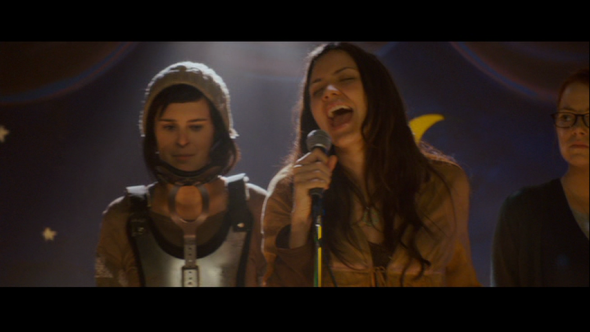 Aside from those two leads the movie also boasts a cast that sounds useless on paper but are awesome together. I tweeted earlier that McPhee acts and sings more here than in all of “Smash” and I stand by that. And who knew that Willis, whose character is stuck in a body brace for most of the movie, ends up having the best body in a cast of many beautiful women? Dennings in her most sarcastic yet most restrained, surprisingly. I love the scene where the sorority girls take out their fake eyelashes and tell each other that despite of Shelley’s inadvertent bad influence the latter still has style. Anyway, back to the cast, Beverly D’Angelo’s villain reminds us that, despite not necessarily deserving a lead role in anything, she’s a competent and more preserved Faye Dunaway. This is an ensemble picture in, as many would see it, its worst and most embarrassing way bot I can’t knock it because of its entertainment value and that I keep rooting for these actresses in their future projects. 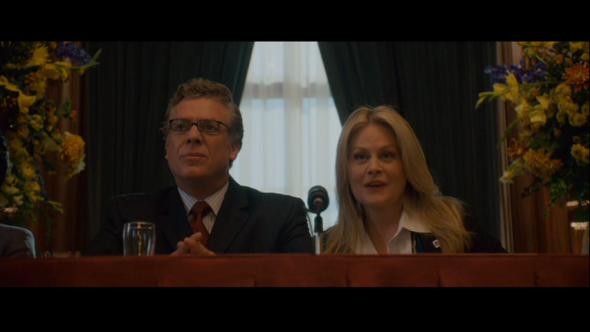 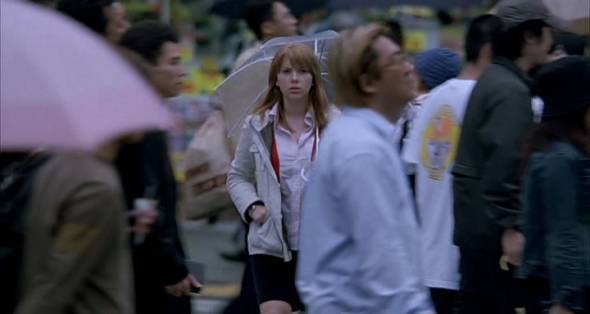 Sofia Coppola‘s choice of indie-trance music on Lost in Translation‘s soundtrack probably blinds me but she  lyrically captures a modern, non-European city that might never be topped by a future film (correct me if I’m wrong, obviously). When slightly washed up action star Bob Harris (Bill Murray) or her heroine Charlotte (Scarlett Johansson) look out of the window, there’s a reason. The fluorescent-lit signs and flashing posters depicting a calligraphic language that the don’t understand. Charlotte leisurely walks the scramble crossings in Shibuya, Tokyo and travel the city’s subway system, Sofia making both modes of transportation look less like its notoriously hectic reputation. She also visits Buddhist temples and enjoys a nightlife that somehow involves a fake shootout, in both times having fun without having to fully drain her energy.

I’ve forgiven Johansson in misjudged performances she will have after this but hers here is probably the best she’ll ever give. Charlotte uglies herself up, agonizing in moments when she feels alone,  abandoned by her husband or when around B-list movie star Kelly (Anna Faris). And her rapport with Bob, her being childlike and girly, captures the spontaneous air that Sofia tries to capture. It’s easier to watch her boredom and frustration and her spark that help cure those things. Bob is the only person to make her smile, pulling out her effortless glow. 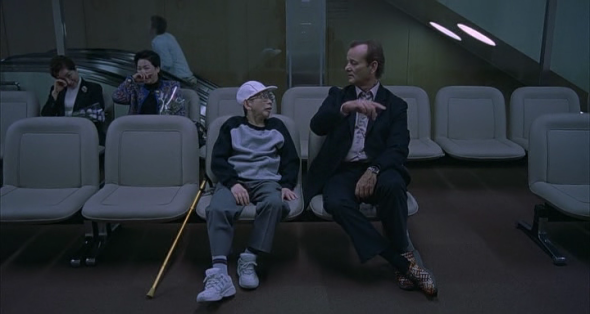 This is probably the second most beautiful movie Woody Allen never made as both writer-directors have, in their movies, bourgeois pseudo-intellectual misanthropic characters. Charlotte has a disdain for Hollywood – embodied by characters like Kelly or her husband John (Giovanni Ribisi). She, when the occasion arises, prefers to sing classic 80’s tunes as opposed to the usual Queen-Journey-top 40 often playing in karaoke bars. (Interestingly enough for Sofia to create a character who is also a Yale graduate majoring in Philosophy but is barely, if ever, seen with a book. On vacation.). Although this quiet snobbery doesn’t stop her from befriending Bob, both of them are in Tokyo for showbiz related reasons, both of them bored and wanting to get out although they’re free to do so anytime.

Most Allen films have characters or devices holding up a mirror against their protagonist’s insanity or at least find someone to cure them. But Sofia, in making these two characters meet, encourage each other’s misanthropy even to a racist level (I’m not the first one to say this) specifically on Bob’s character. It’s understandable to feel anomic in the Japanese urban landscape that equally and inadvertently exclude them as ‘foreigners’ but it shouldn’t excuse their language and attitude. “Why do they switch the ls and the rs here?” I don’t trust my interpreter. I refuse to learn the language. These people like eating body parts of white girls like Charlotte. Murray pulls these lines off with his wit and comic timing but I still feel uncomfortable with his and the movie’s xenophobia. 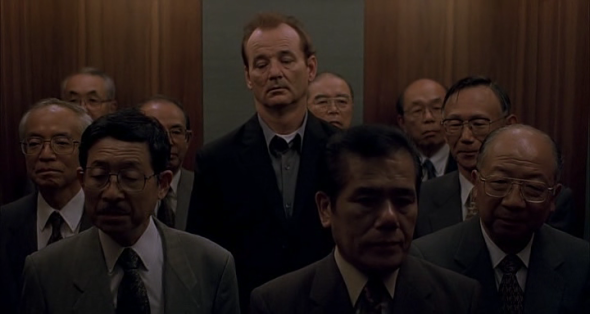 Jody Hill’s (“Eastbound and Down”) dark comedy Observe and Report got a lukewarm reception at the box office mostly because of unfortunate timing – Warner Brothers released the movie about a mall cop three months after the Kevin Smith ahem, blockbuster vehicle Paul Blart: Mall Cop and suffered for it. Thankfully, Criticize This writer and Indefensible founder Andrew Parker and Exclaim!’s Will Sloan are ready to make us believe that this movie is a masterpiece. The film’s star Seth Rogen won’t be at the Toronto Underground Cinema at both this Friday and Sunday screenings, but for us gays and girls who like our guys ‘Rogen size,’ Torontoist‘s John Semley will come to Friday along with CinemaScope’s Adam Nayman – unconfirmed –  to trash the movie. I have no idea what size Mr. Sloan comes in. Then this Sunday, NOW Magazine‘s Norman Wilner will introduce, defend Observe and Report and show its similarities to another film showing at the Underground that night – Taxi Driver.

I have cheese factory duties on both screening times so I won’t get to see Rogen and his apparently career-best film performance. Neither will I see the great Celia Weston, nor apparently the greatest fight scene in an English language film, nor the longest full frontal scene ever – not a pun. Nor will I be there to snark that ‘I hate malls, I like boutiques better, I hate the suburbs, I live in Toronto.’ I will be there in spirit. Supporting cast includes Anna Faris, Ray Liotta, Patton Oswalt, etc. Both screenings start at 7PM. Proceeds go to the Organization for Bipolar Affective Disorder. 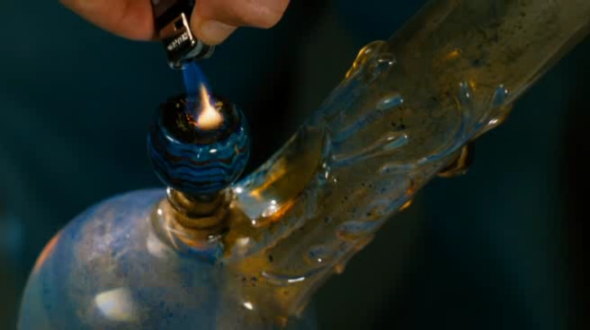 That’s an image from a good, colourful montage, close-ups of objects that the partygoers in Waiting… use to party. Or a more condoning montage than that in Requiem for a Dream. They’re just as colourful as the decorations and wallpaper in the restaurant where all these partygoers all work. 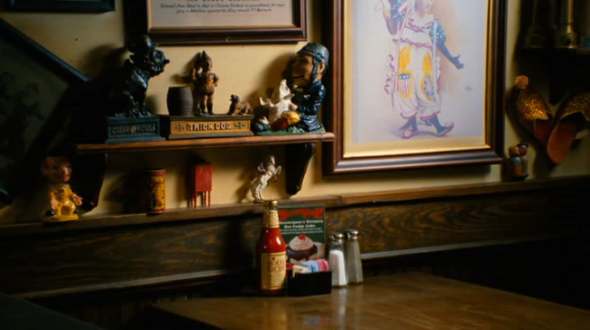 There’s two major story arcs. The first is with Monty (Ryan Reynolds), the restaurant’s token studs, who has to train a younger kid named Mitch (John Francis Daley). He lets Mitch in on a game where the men show each other their genitals and call the loser a fag, which surprisingly isn’t offensive. He also shows Mitch different types of customers, women who love male waiter and will give them good tips, pervert frat boys and a bitchy lady (that’s the character’s name on the credits) who has a Pavlovian masochism to keep going to a restaurant with ‘terrible food.’ How small is this town? Typically, the movie almost made me not wanna eat in a restaurant, with all the terrible things they do to the food. But the crew’s gonna be there all day and night so that’s a Pyrrhic victory. 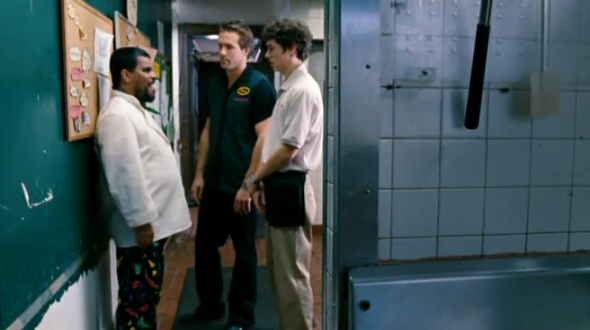 The second is Dean (Justin Long), a guy who had all the good grades in high school but is a member of the lost generation and hasn’t finished his diploma or degree yet. His mother tells him about Chett Miller, another guy he has gone to high school who has finished a degree in electrical engineering, and Dean’s still working his job as a waiter. And I can so relate to this stuff. This new ruins Dean’s day – this is the unique way he’s emasculated even if every other guy in the restaurant get emasculated if he hasn’t been already. There’s good news. Manager Dan (David Koechner) offers him to become an assistant manager – with that he’s ambivalent about. But then Chett Miller is Chekov’s gun within a movie that portrays a 24 hour span and will show everything that can happen to someone in a dead-end job. 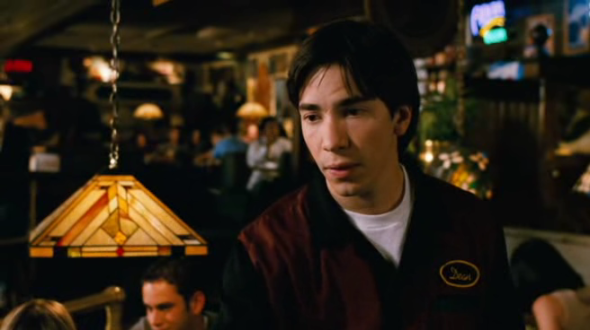 The film has an impressive supporting cast that includes Dane Cook, Anna Faris and Wendie Malick who are typecast but their work is subtle for a sexually explicit script. The actors who play waiters are typically good-looking, Anna Faris’ ironically named Serena having to wear trashy blue eyeliner so that the audience can distinguish her as Amy’s (Kaitlin Doubleday) spunkier version. In general I call it redeemable and good enough for a ‘bad’ movie night. 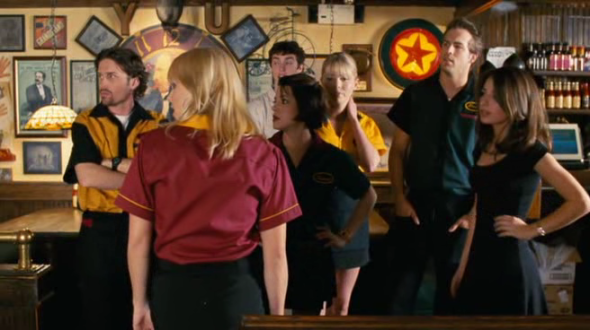