We’re on Kenneth Branagh‘s adaptation of Love’s Labour’s Lost, a Stanley Donen and Martin Scorsese presented Miramax production! It’s one of Shakespeare’s comedies that I haven’t read yet, is about the King of Navarre (Alessandro Nivola) asking three men in his court, Berowne (Branagh), Longaville (Matthew Lilliard) and Dumaine (Adrian Lester) to embrace three years of study and shunning love. Unfortunately, Princess of France (Alicia Silverstone) and her ladies-in-waiting including Katherine (Emily Mortimer) and Rosaline (Natahsa McElhone, her Streepian looks having such promise a decade ago) visit their kingdom. Because of the oath the women have to stay in a tent outside the palace gates outside but that doesn’t stop the men from peeking.

Pardon the blasphemy, but listening to the men harmonize to Irving Berlin classics like “Cheek to Cheek” is an equal alternative to Fred Astaire’s seminal version. The movie’s 1930’s setting also allows Branagh and crew to go all out with the musical numbers, the set pieces, the one-time cabaret-style sexuality, the ridiculous newsreels about mobilization and the war. The colourful cinematography and the costumes are a great treat for actors like Mortimer – who would go de-glam in their future roles.

It’s also about actors who shouldn’t be hanging out together. Branagh, Mortimer and McElhone are fine together, his soliloquies here are better than in his own adaptation of Hamlet. Branagh wants to make things interesting, casting 90’s teen movie regulars Lilliard and Silverstone. Lilliard is awesome in SLC Punk, his American delivery of the Bard’s lines can’t be as distracting as Keanu’s. Silverstone, however, might never rub the glee off her even when she’s playing middle-American mommy roles, but that’s what she’s here for, to offer sunshine and girliness fitting to a movie about romance. If you’ve ever read or heard me call Silverstone a ‘Shakespearean actor,’ it’s because of this movie. I don’t know whether Nivola or Lester fits in more with the Brits or the Americans. And hey, this movie is probably the only Shakespearean adaptation where miscegenation is no. Big. Deal.

Nationality and race is no boundary to make it seem like everyone was happy making this movie, despite its overshot ambitions. Oh and veterans like Timothy Spall as the lustful Armando, Nathan Lane as the King’s clown Costard and Geraldine McEwan as the tutor Holofernia are in this too, camping it up singing and dancing with the rest of the cast. This isn’t just any movie, this is a PARTY!

Cher tries to set up people in couples and boxes, but Clueless subverts assigned stereotypes, the most obvious one being that ‘clueless’ newcomer Tai (Brittany Murphy) is sluttier and bitchier than she looks. There’s more.

Dionne is not Mammy. Dionne (Stacey Dash), is a true Beverly Hills girl with mood swings, which is why I love her. If writer-director Amy Heckerling was a worse writer, Dionne would only serve as life support to Cher. Dionne has juicy scenes like crying in the bathroom in a party when she finds out that Murray (Donald Faison) – who isn’t threatening because he wears braces – shaved his head, or slightly betraying Cher by huddling around Tai (Brittany Murphy), or freaking out on the freeway. I especially love how the film sets up the latter scene. Her line reading of ‘What if he was really tired?’ is both deadpan and camp, both levels played well together. Dionne and Cher talk like that throughout the film, like a Whit Stilman film where all the character wear pink. And the deadpan aspect of the line readings prepare you for the hilarity that’s gonna ensue. Also, she is older than Paul Rudd. Speaking of minorities, 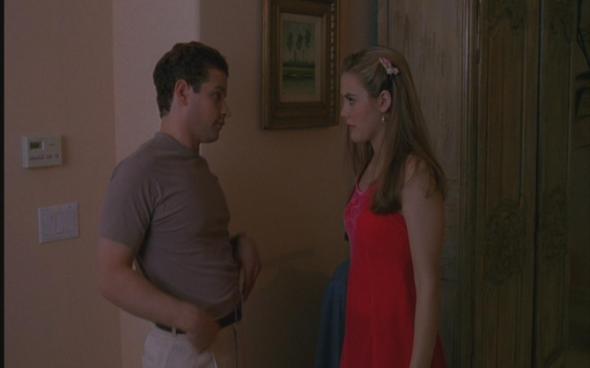 I couldn’t tell if Christian was gay neither. The Jason Priestley lookalike’s pleated pants and old man abs made it more difficult, if you must know. And yes, the film deceives us when Christian acts a bit combative towards Mel (Dan Hedaya), while gay boys successfully befriend parents. Although ‘hagsville,’ Tony Curtis RIP and ‘Aww, honey, you baked’ should have rung alarm bells. Which brings me to why I didn’t wanna bury this section as a third item. I’m a Filipino gay man in my twenties who writes about film instead of a white straight male critic over 40, and for some reason, I feel more personally about characters who fall in whatever bracket I share him or her with. That’s something I don’t see too blatantly in 40-year-old straight white men, or at least their character critiques are more general. I think. In layman’s terms, I kept comparing Christian to myself, or who I was when I was the same age as he is. Can someone back me up on this? Christian dances with another guy in that party, something I would never try to do unless I was in a predominantly gay area. But then he’s a classical film lover and a bit of  a ‘art fag,’ written by a woman, based on a source material from the Regency period. Christian makes me curious about what ‘gay guys’ have been like in 1995 or the early 1800’s. And how could Murray have known and not Cher nor Dionne? Don’t  women have better gaydars than straight men. Or maybe Cher and Dionne just don’t.

If you pay attention to the film, you’ll know how it might end. I also really like this scene/shot/movie because of the generational divide, Josh (Paul Rudd) looking at Cher with such reverence while Mel’s being stern towards Christian. And Josh is aware of this generational divide, telling Mel not to let Cher go out looking like ‘that.’ Josh is in between, the bridge between Cher and Mel, old enough to know better, young enough to know that Cher isn’t so vacuous as others might think. Although he distractingly sounds a bit  like Christopher Walken in one of the last scenes. Also, did anyone see this movie and think ‘Josh is gonna be ubiquitous,’ because I didn’t. 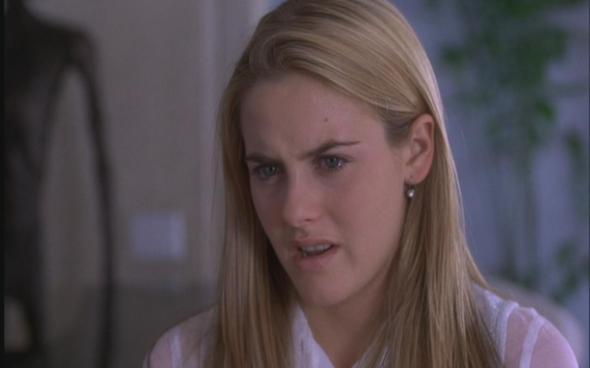 Cher isn’t always perky, but some of you might have known this already. Yes, her arguments about violence in the media is considerable, but her knowledge of ‘Haitians,’ jazz and art criticism needs work. If any of my professors heard ‘Monet’ defined like that, they would pop a blood vessel. She drops the Beverly Hills accent once in a while, which surprisingly makes both inflated and deflated Cher more convincing. And is that a Kollwitz sculpture behind her? I imagine her being a philanthropist, if she’s not misled. 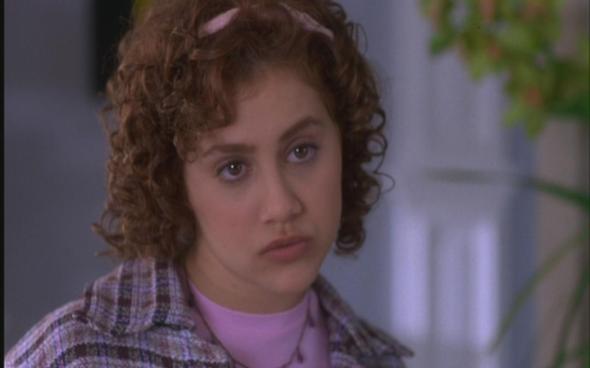 New York Tristate in the house. Timothy Findley who first talked to me about the New York exodus to California in the early days of cinema. Apparently Tai and Mel has kept that tradition alive, their accents representing as prominently as the California accent. 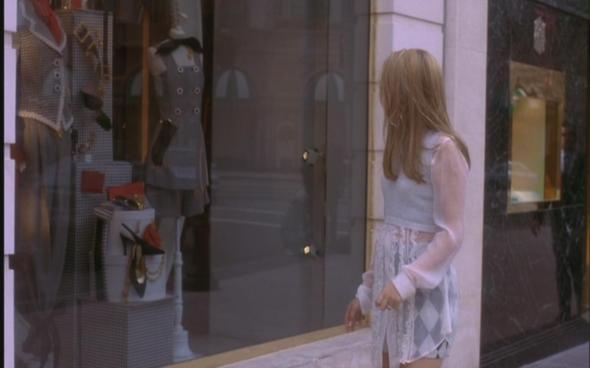 Ooh, I wonder if they have that in my size. If this movie’s setting is 2010, she wouldn’t need to ask that question because she’d be a size 0. Or maybe not being size 0 makes her better than the average airhead.

Starbucks? That existed before the 1999 Seattle riots?

The world goes on despite of Cher. So this is the third movie I’ve seen this year about the Bosnian War, although I’ve seen Clueless before. The Bosnia reference also shows how 90’s it is, a great addition to other 90’s references like Ren and Stimpy, Radiohead, Alaia. Also, is that a flower-pot? How much did Mel let her decorate in the house? Cher’s very girl for a girl raised by a single parent. This movie is about Cher becoming more well-rounded. It also helps that she has people like Josh around her, correcting her without being condescending. And Christian ‘educating’ her about film and art. And Mel who’s an art collector himself. And Miss Geist (Twink Caplan).

I also watched the television series, where Caplan, Dash and Faison among others took the roles they had in the film, but you knew that already.

Also, Scott Rudin prouced this movie. Respect. Silverstone and Heckerling, also the director of Fast Times at Ridgemont High, are reuniting to make Vamps, about vampires on the prowl in the city a la “Sex and the City.” I’m worried.