While writing and procrastinating, I decided to have a midnight snack-like Youtube break. Guiding my choices was the overjoyed news that Taylor Swift will no longer play Eponine in Tom Hooper’s Les Miserables and is replaced by stage vet and Nick Jonas’ girlfriend Samantha Barks. She, by the way, joined a elimination-style reality show called “I’d Do Anything” years back, the show’s objective being to find a singer/actress to play Nancy in a West End revival for the musical “Oliver.” She can sing all right, effortlessly making her voice go to eleven without moving a muscle away from her smile. But during results show performances she’s always a kicker or a bridge, letting the other contestants out-act or out-sass her, and the same goes during the sing offs. Had this been a Tyra show, she’d been out during the middle of the show for being ‘boring.’

Then my search veered into the missions the contestants had to do to understand Nancy, some of which involved behaving like Nancy. Now let’s see if the woman can act. Sometimes she just stands there but mostly she has a confident presence, which isn’t the same thing as strong. In some challenge she doesn’t show fear or, on the clip below, weakness, when she’s supposed to. I have faith for her in drama, I just hope shoe doesn’t revert to her early days. But she’s made progress in three years with her voice breaking as the perma-anguished Eponine as part of the 25th anniversary Les Mis concert. Despite her voice, she admits to not being a perfect actress. That’s one out of two, better than Swift’s batting average.

“Evan! We were just doing…sleeping time”

“Shower, and we’re doing some…” 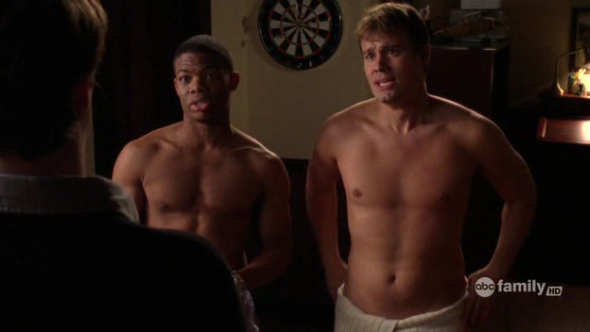 That episode of Greek was something I saw almost exactly last year. That, however, doesn’t mean I haven’t been watching stuff from this season. ABC Wednesdays, NBC Thursdays, “Wilfred,” what else…. Anyway, remind me before Emmy season to talk about those other shows.