I am not submitting a Best Shot entry, I wrote about Arthur Penn’s Bonnie and Clyde and I don’t even know if that post makes any sense, especially as a Best Shot post. So instead I’m posting a video that doesn’t have the same sexuality as the sonic experience of Serge Gainsbourg and Brigitte Bardot’s song about the ill-fated couple.

I imagined two people with the wind blowing on their faces as they traverse the Southern crossroads, not two glamorously dressed people pointing guns and posing away from the camera. Adrien Brody/Vincent Cassel and Lara Stone should do a photo shoot or a full remake of this video. We’ve come a long way from music video artistry/acting.  It also delights to me watch Disgusting Racist Bardot’s looks slowly deteriorate. She held on to her looks long enough. Either way, it’s a relief to see that musicians didn’t have to be good looking back then.

I first heard of this song in Laurel Canyon but this song was apparently on Rush Hour 3 and I’m almost willing to forget Brett Ratner’s homophobia for this. Also, I’m drunk now.

The Heart is a Lonely Hunter

The Heart is a Lonely Hunter, based on Carson McCullers’ novel, shows how the characters’ time together, despite of their reliance on its permanence, is fleeting. Mr. Singer (Alan Arkin) has to move from a smaller town as Antonapoulos’ (Chuck McCann) guardian, being confined at a facility in Jefferson, Georgia, a place wher he isn’t supposed to be. In Jefferson, he boards with the Kellys and works for an Afro-Caribbean doctor, dealing with the latter’s family troubles. 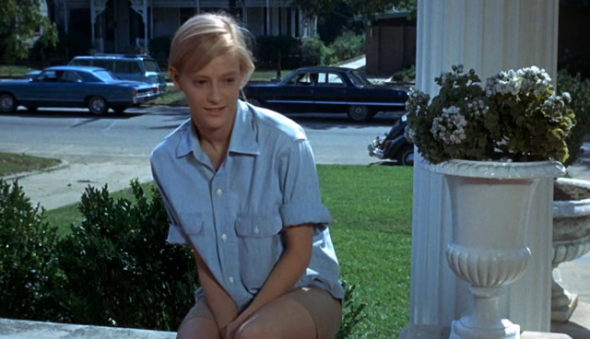 I like the Kelly’s daughter Mick (Sandra Locke), supposedly being more refined than her respectfully working class family is and will allow. There’s a scene when she hosts a party for the other neighborhood adolescents and they end up using her brother’s fireworks. She wants happiness and acceptance but will not compromise herself to get that from her peers – as they play with fireworks, she kicks them out of her property I would have let them play with the fireworks while moping.

Singer is the perfect friend for an ‘individual’ like Mick as he is with the doctor or a recovering alcoholic (Stacy Keach). He’s shunned by Mick but she changes change her mind when he starts buying her classical records even if he can’t enjoy them. Arkin is perfectly cast as Singer, even if it’s in the level of physical appearance. His dark features, making him look biracial, contributes in his role as a shamanistic mediator between the whites and blacks. He wears a suit and walks around, his silence read as pensive, altrustic and even happy.

Yes, there are ridiculous points in the film, like when the doctor’s son-in-law Willie stabs a racist man with his own knife instead of throwing it away. Or McCullers piling on departures and rejections and violence on Singer to drive him to his end. Was Singer not strong enough? Mick says that he was there for her and for everyone, and I wonder if anyone can withstand constantly being that person.

“If” and “Elephant” aired at TVO last Saturday midnight. Someone out there probably thinks both movies deserve a post of their own, but since the channel aired them back to back, I couldn’t write about one and not the other.

I just wanna first talk about the gay angle, since both movies present that theme, and that some gay characters bring out violent acts in both movies. Furthermore the gay thing is usually seen as a scapegoat – they’re gay and they’ll find the second most phallic thing to act out their repressed desires. I will say that causality between homosexuality and violence is blurrier in both movies, but both still show that homosexuality is the result of how the respective fictional societies molds these youths.

“If” has a more traditional view of homosexuality as it does in every relationship – one person is masculine than the other. There’s the senior boy and the junior boy, a relationship built on foundations of “smugging” or serving the older student, which is a part of the masculine patriarchy set in college culture. For example, the junior boy Bobby Phillips cooks for the senior boy and packs up Wallace’s things, while Wallace is desirable for being more athletic. Although the smugs are interchangeable, the Phillips still has loyalties to the one he is infatuated with, as expected. But Phillips gets points as well, being the first one in the relationship to use his gaze towards Wallace, as well as calling himself more goal-oriented. 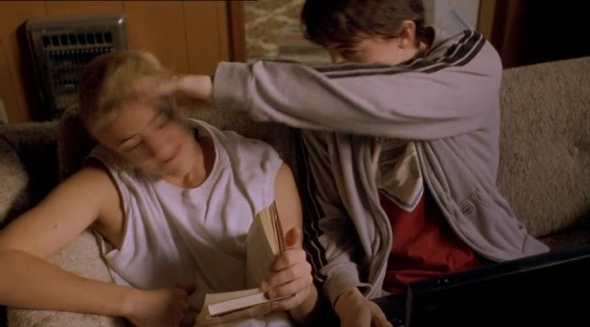 “Elephant” is different when depicting homosexuality, specifically that the film denotes its elusiveness. We get a look inside a Gay-Straight Alliance meeting, where they try to list things that would make someone look gay. And they can’t because indicators like that are arbitrary. Van Sant also rotates the camera so we can see the group, again not being able to tell who’s gay.

There is also the case of Alex and Eric. I don’t fall for the apologetic “they’re not gay” argument because they do kiss. Yes, their homosexual act does not define them just like many boys who kiss other boys end up being with girls and they’re still underage so their sexuality’s not defined. That does not mean that we can invalidate their affection for each other. And unlike the prescribed roles in “If,” one plays the piano while the other one has blonde hair, but we can’t tell which one’s more masculine or feminine.

The movies are also an observation of schools as institutions where they try to give you everything like gymnasiums and microscopes yet they try to take your individuality away.

I like “Elephant” more than I like “If” since you can hear the screams in the former instead of the gunshots. But then again “Elephant” is part of my generation. Sure I wasn’t in high school yet when Columbine happened but the next two or three years after Columbine was the culmination of teen angst that has been hidden and ignored since Cobain died. Kids today are too busy looking at LOLCats to even muster up hatred against each other. And whoever made LOLCats should get a Nobel Prize, but in my time I felt angry and that there was so much violence around.