Does Claudia Cardinale get a hat trick for having three great movies in 1963? The Pink Panther isn’t a ‘great’ movie. Neither is Cardinale’s performance flawless as Princess Dahla. Dahla owns the Pink Panther diamond, the anxiety of the latter’s theft outlines the plot. She thankfully doesn’t try to seduce through every line, too smart for such ingenue moves. Neither does she have the glee that Audrey Hepburn has in director Blake Edwards’s earlier film, although I do appreciate Hepburn efforts there.

As Dahla, she tells a suitor Sir Charles Lytton (David Niven) about being a product of the East and the West, a ‘contradiction’ Cardinale might be able to relate to, being a Sicilian born in Tunisia. Cardinale approaches Dahla’s with confident detachment, and she makes the latter word have nothing to do with a fear that it normally does. So fine, I’ll give her the hat trick.

Even some of the gags don’t have enough punch. I will, however, say that the gags involving Charles and his nephew George are stuck in Inspector Clouseau’s (Peter Sellers) hotel room, Charles and George doing a better mirror scene than the Marx Brothers – yes, I said it – and the zebra in the party scene are unforgettable moments. And Edwards is the classiest ‘sixties’ director I’ve seen so far, his comedy making time’s passing seem quicker.

My first film professor taught us shot-counter shot relationships through the most complex examples – those that are found in Alfred Hitchcock’s The Birds. This isn’t the first time Hitch made characters within the film as metaphors for the audience. However, unlike in Rear Window where there are just three or four people at the most watching Jimmy Stewart’s neighbors, it’s one or two-second shots a little crowd watching, all of them focused on different things. Until our main heckler, Melanie Daniels (Tippi Hedren) points out something urgent. Shot: explosion! 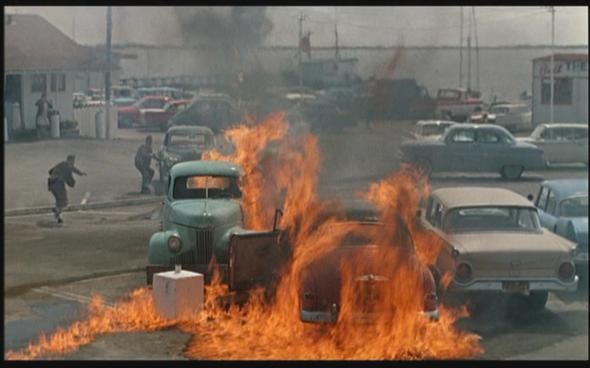 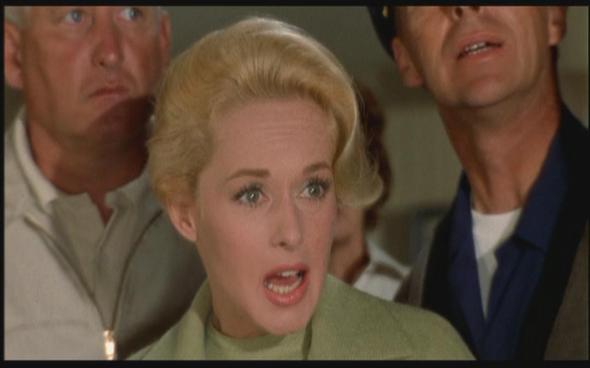 Wait, did Tippi name her daughter after this character? Anyway, shot – another explosion!

And establishing shot, showing the audience both how small and large the damage is, and showing us the distances between the three locations where the action happens and is being watched. People in chaos running like ants. And that’s just the beginning of another attack. 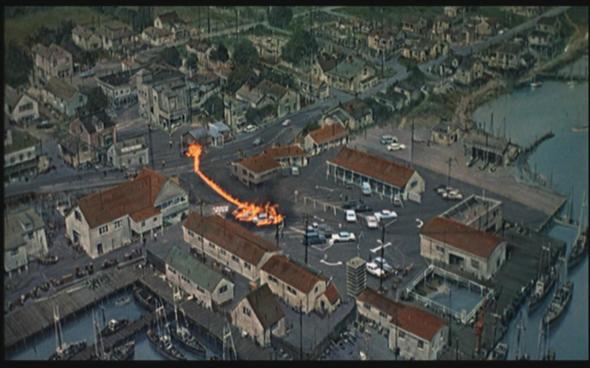 I can only imagine papers written about this movie all fighting for what they think the movie’s about. The bird attacks symbolizing Cold War paranoia, the urban versus rural divide, the xenophobia engendered by those two issues – love interest Mitchell Brenner’s (Rod Taylor) sister Cathy (Nancy Cartwright) judging her brother’s clients as hoods, even if their mother Lydia (Jessica Tandy) corrects her to no avail. Or the birds as a comment on Native versus white occupation, nature against man or expressing how crappy it is to meet in-laws. Melanie is the stand-in for the audience but she comes of as a bit distant so some of the audience can relate more to the townspeople who alienate her. As one of the misinformed visitors say, she might be the cause of all this, the birds following her around and attacking her. And as a big city girl, she goes places alone, and every ten or fifteen minutes of the film she gets attacked.

The film’s first scene alludes to a court date, which leads to socialite Melanie’s history of pranks and Roman exhibitionism. Her face is small, child-like and elegant, but unlike most of Hitch’s earlier heroines, she isn’t one bit innocent. Her deeper voice is more flirtatious than Hitch’s women before her. Instead of feigning innocence, she tries to she the audience that those reckless days are behind her. That’s why the recycled Edith Head outfits and aging chignon are trying to convey. Those qualities convince Mitch, although creating quick banter between them, he keeps reminding her of her past, that she stalked him all the way to his small town, Bodega Bay and won’t let her hear the end of it. She does have to face a hurdle, Lydia which reminds her of issues with her own mother.

Lydia despite of what she reads in the gossip columns, also reluctantly gives Melanie the stamp of approval. The film introduces Lydia as an older woman with piercing, accusing eyes. Anne also gives Melanie fair warning about how Lydia may take her and Mitch apart the same way Mitch and Anne’s relationship ended because of Lydia. Thankfully however, Tandy lucked out on becoming the nicest, most three-dimensional older woman, her age group otherwise demonized in other Hitchcock films (the second nicest, most three-dimensional old woman in Hitch’s films is Anthony Perkins). Lydia is specifically distresses seeing another farmer’s corpse, attacked by birds. She gets to air out her anxieties, her fear that comes with a loss of physical and emotional strength. She questions her own mothering abilities, she’s afraid of being abandoned, ambivalent towards Melanie that she reveals to the latter’s face. She creepily calls Mitch ‘dear’ then later calls him inadequate compared to his father, Frank.

I’ll go back to Hedren’s acting. She can convey the darker, sexier side of later Hitchcock heroines while being caring towards the Brenners but sometimes she loses that spark. Some of the attack scenes also show her weak spots – she flirts seconds after being attacked by a gull, taking away from the believability of the scene. In other scenes, she positions her head, lips and every limb in its exact, photogenic place, not letting go of a performed beauty even in moments of terror. I’m not sure whether to blame her or to blame Hitchcock whose relationship to actors and coaching them aren’t known as the best.

My second complaint would be the special effects, but I think some of you will defend that as ‘painterly.’ Yes, I was actually terrified when the birds started coming in from the fireplace. And yes, I know that Hitch and his crew used as many live birds as possible during production. As the ornithologist in the restaurant says, it’s a war against the temperamental birds, the film this about whether the birds do or don’t mark their territory against man. 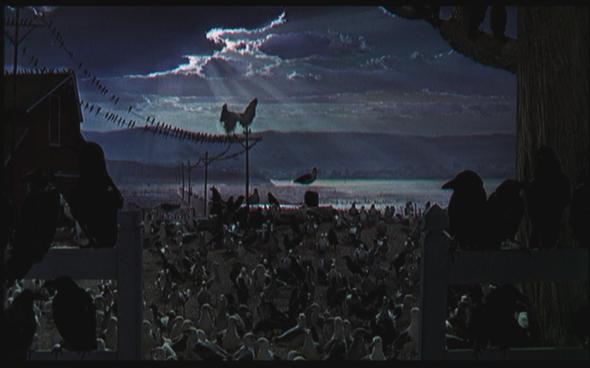 Last chance: Tonight at 9 at the Bloor. I have work tonight so I can’t see it, but I already saw it so I’m ok. If you can, go see it. Or Saraghina will come after your child and give him an education and a gift that keeps on giving.