Before even seeing Ingmar Bergman’s “The Seventh Seal,” we’re probably already aware of the iconic images of Death (Bengt Ekerot) extended, cloaked right arm and his game of chess with a knight named Antonius Block (Max von Sydow). These are the kind of scenes you save from the ending of a movie but Bergman makes the momentous meeting between Death and his challenger in the beginning. Like what can Bergman possibly give us for the rest of his movie’s 92-minute running time? How many times will Death and Antonius meet again, and how is it going to involve a coast village full of actors (Bibi Andersson and Nils Poppe) and the occasional blacksmith (Aki Fridell)  and witch (Maud Hansson)? 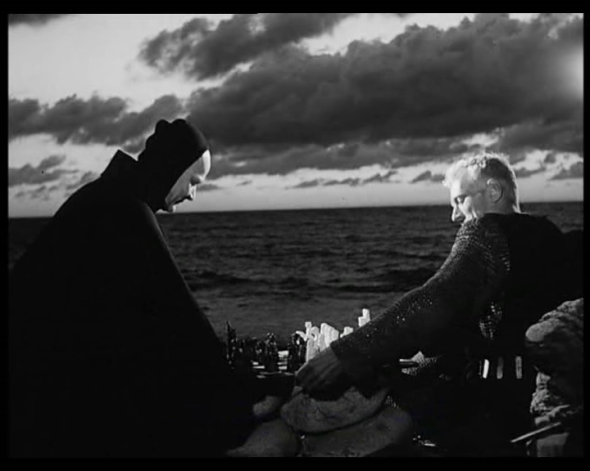 I must say that I’m more of a Bergman fan when his work was grounded in more recent settings as well as more contemporary emotional and psychological concerns. Although I’m not saying that his work before “Persona” had no merits. “The Virgin Spring” hit me hard but like it, “The Seventh Seal” have the same primitive, storybook-like air and pacing to it, the characters having the same abstract dimensions within a unique yet helplessly dated environment.

But while it might lack the kind of articulation of character that I’m used to in his work or in other works, it does show all of them within this cultural fabric that’s obsessed with death. It is the medieval Europe after all, after all, when people equally feared God and the Bubonic plague. And with the actors and fresco painters as characters in this movie we can see art making these zeitgeist-y questions more permanent for future generations to see and remember. Maybe it’s this distance between my culture and the one I’m watching, a distance I lamented at one point, comes to the movies benefits because contemporary eyes will always see something fresh with the time capsule what Bergman puts on-screen.

A Plague-filled country isn’t the best one that anyone could return to, especially Antonius who has just fought valiantly during the Crusades and has thus seen his own share of multiple deaths. One can read his return and his meeting with death with suspicion, the seemingly noble, well-intentioned man inadvertently bringing death wherever he goes. But we don’t necessarily have to blame colonialism or other countries for bringing death home. Death is inescapable.

Since we’re on the topic of culture and widespread death, notice Bergman’s sober perspective on how the characters form quick grudges and bonds. Men switch territories, actors change visions, women cheat on their lovers. Yes, sometimes, people and their trust for each other are their worst enemies, as Death consistently tricks Antonius with his disguises. And yes, it’s easy for other storytellers to blame other humans or the necessary evil of interpersonal relations on the deaths occurring during the movie’s time frame. But despite of its implications of human passiveness, Bergman lets these characters bond and forgive each other, setting necessary boundaries to keep the really bad people out. The movie also stars a younger, rougher Gunnar Bjornstrand as Antonius’ squire, belonging to a set of actors whom Bergman will continue to use.

TV airings/film screenings of The 400 Blows are often preceded or followed by director Francois Truffaut‘s short film “Les Mistons,” where a group of mid-20th century rural French boys spy on a young woman, Bernadette (Bernadette Lafont), then her boyfriend Gerard (Gerard Blain) gets into the picture and spy some more.

For some reason, I never got the feeling that the kids really wanted to replace Gerard, as if Bernadette’s more interesting because she has a boyfriend and they start feeling guilty about their voyeurism when she loses him to the Algerian War. I’m more interested in the Algerians that Gerard might have electrocuted, but then there’s already a movie about that and I’m a bitch.

Ready For My Best Shot

As part of Nathaniel R’s Hit Me With Your Best shot series, this week features Elia Kazan and Budd Schulberg‘s A Face in the Crowd.

Marcia (Patricia Neal) is all smiles in this dank jailhouse but for some reason, she looks at a drunk prisoner Lonesome Rhodes (Andy Griffith), both moved and saddened. I watched this movie cold and for the first time. This movie begins with bucolic acoustic guitar music, the first scene acted out in this room. Misinterpreting Elia Kazan’s reputation as a theatre director and ‘Budd Schulberg’ meaning this movie was probably based on a play. It would also be a challenge to the filmmakers to create cinema in such theatre-like spaces. Mix those Rube Goldberg tangents with how I liked the way these characters are in this scene, I was assuming that this movie’s gonna stay put in this room and in this small town. But nooooo….. 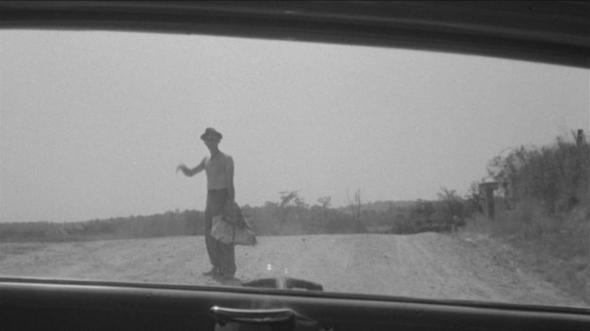 Kazan was the closest thing North America ever had to a Roberto Rossellini, or is he?

This is what I imagine every pre-1967 B-movie would feel like.

Then he became a sellout douche. The best comparison I can come up with for this director and movie is Richard Brooks’ Elmer Gantry. This movie’s also about the advent of television and celebrity politics, with the TV set within the frame.

But here is my best shot, even if it doesn’t encapsulate the film. None of my best shots yet are like that. It’s probably yours too, which makes it boring, but I hope my write-up seems more ‘original.’ 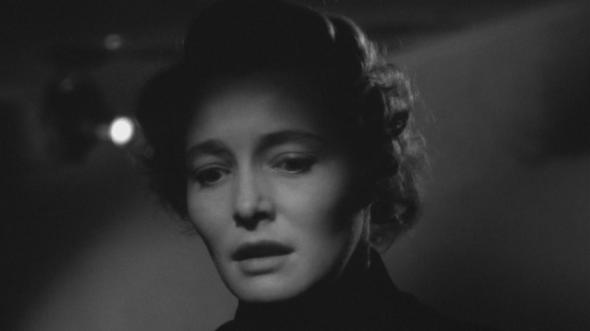 I call this the Reverse Norma Desmond Shot. Marcia reminds me of Norma’s insane, destructive impulses. A member of Rhodes’ sound crew blurted out how he would like America to see what the real Lonesome Rhodes is really like, or more correctly, has become. This little wish turns into a sinister idea that possesses her, thus the obvious but probably one of the most effective noir-like close-ups ever put to film. There’s also a little of Joe Gillis in her in wanting to unmask the truth to and about a delusional person, yet what she does to him is more cruel that what Joe says to Norma in person. She destroys him, and in doing so has to both lament and defend that rash decision. 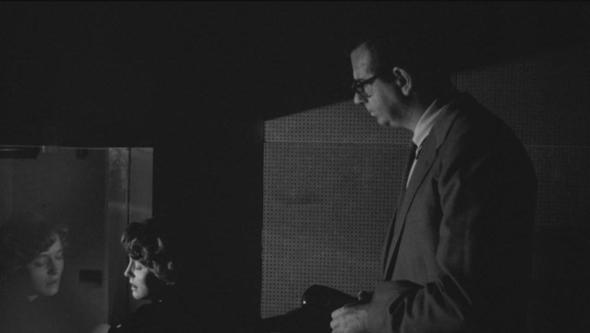 In this samurai period piece, director Akira Kurosawa features some shots of the forest. Seeing Washizu (Toshiro Mifune) and Miki’s horses gallop at such a height behind trees and branches reminded me of Japanese scrolls because of their boldness. It also reminds me of a bit of the Chinese (yes, I said Chinese) artist Fan Kuan in the distance in which the two generals place themselves within the mise-en-scene. It’s not all forests, however. He treats interior spaces with such geometry and depicts expansive arid landscapes in full screen. Yes, full screen. It’s like he rightfully proves that Hollywood didn’t need to invent the Panavision camera.

I really thought I was gonna be bitchy about this movie as an adaptation of “Macbeth.” Why aren’t they saying the right words? And they cut the MacDuffs and Edward the Confessor, characters I really like from the play. I guess if this movie was in English they wouldn’t be able to get away with that, but Kurosawa movie gets a pass. I re-read parts of “Macbeth” just to show the comparison again, and there’s a lot of sexual language in my reading of it. What Kurosawa’s film does to the story is take away the seduction and instead put rhetoric as the reason for killing, the latter being a major topic in Shakespeare’s other works. Washizu will go far as misreading the omens around him to convince himself that he’s in the right. I still have some problems with that inversion but I can appreciate it. 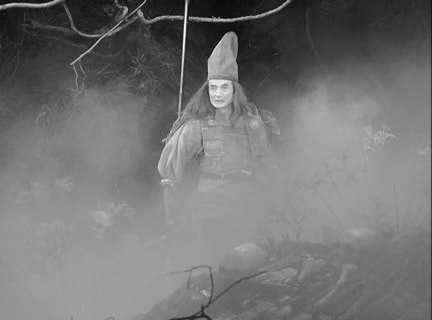 I’m not the biggest expert on Noh and Kabuki, but I’ve seen it done better. Here in “Throne,” Isuzu Yamada as Washizu’s wife, Asaji, does a lot of great work as the ghostly Noh character. The Old Ghost Woman was terrifying in her stoicism and portrayed her character asexually. It’s Mifune’s character and acting that killed me, being evil only because he looked the part. Yes, he’s inundated with violence, anarchy and deposed shoguns. But the arc from him dreading the predictions towards delusional leader wasn’t portrayed well enough for me. And I’m not sure if this is part of the style of acting, but I can’t stand yelling in movies.