While talking Josh Brunsting on Twitter, who compared Harmony Korine’s Spring Breakers to Jean-Luc Godard and Terrence Malick’s work, I had to chime in that it also reminded me of the work of two opposing Germans – Leni Riefenstahl (as I said in my REVIEW) and Rainier Werner Fassbinder. The reason I brought up Fassbinder is because of his début in Love is Colder than Death where, SPOILER, a couple drives off after killing a man or more. To a lesser extent, his work like Ali: Fear Eats the Soul and Berlin Alexanderplatz are about people who aren’t perfectly redeemable but struggle with the consequences of their amoral actions. 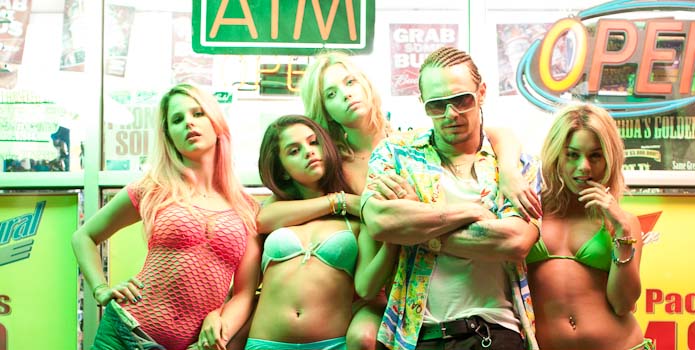 I figured that the character arcs in Love is Colder than Death would have shocked a world that’s still trying to recover from the Hays code’s repealing, and that thankfully us Millenials have gotten over this sort of moral conservatism. The polarizing reaction towards this movie might bring up two questions about its contemporary audience’s viewpoints – do we still have the ethical hangups like we did forty or so years ago, or is it because Korine can’t/won’t sell this characters with any absolution?

This entry was posted on April 4, 2013 by paolocase. It was filed under Movies and was tagged with 2012, Ashley Benson, Harmony Korine, James Franco, Rachel Korine, Selena Gomez, Spring Breakers, Vanessa Hudgens.