I wrote about “The Twilight Saga” on Entertainment Maven because I fucking watched all the movies in one sitting a few weeks ago. And it’s probably the Kraken vodka speaking but I didn’t hate the experience, despite my drunken howlings of ‘what the fuck’ to the screen.

And here’s a crazy theory that is aided by my rudimentary math skills. The first Twilight book came out in 2005, when its fans are at the sad age of fourteen or something. It is now 2012, when all those girls are now 21. Half of those girls graduated from Twilight into “Fifty Shades of Grey” or “Girls,” while the other half are still fans of Twilight but see it as the silly thing they still like. They have healthy laughs about the production, the campiness and the shitty supernatural laws that don’t make sense. And I don’t know if it’s my quasi-masculine perspective but to me, the saga doesn’t just give a poorly constructed love story. The saga is also schizophrenic in a way that one movie would have a ‘romantic’ story and another would have a bloodbath with lost of decapitated heads. It’s introducing girls to violence and the necessarily the kind that they would use inwardly.

Since there are impressionable girls around, they need a role model and they have found an unlikely one in Kristen Stewart. Stephanie Meyer’s first choice to play Bella was Emily Browning, and I imagine that actress to have brought the same awkwardness of a contemporary art painting, palatable in her awkwardness, the kind of person who falls down gracefully. Stewart, however, is defiantly awkward with her blunt edges, only capable of beauty when she’s being photographed in a fashion spread. Whether the unformed person we’re seeing is Bella or Kristen is up for debate, really.

She also reminds me of a less rewarded Rooney Mara, or the kind of actress whose honesty in engendering a desexualized female would have flourished on cable television a decade later. And that’s not necessarily an insult because I love TV. And again she works capably with other actors even if she can’t carry a movie herself. I’m probably writing these words after being misled by all my ‘research’ on the series, which include People and EW’s puff pieces about the saga, but they don’t necessarily make my words less true. Basically, I just wasted four hundred or so words in saying that the girls who read Twilight and the girls acting out Twilight will be fine. I’m not so sure about Meyer, who apparently is going through a writer’s block now.

As I said before, the soundtracks are better than the movies. Who would have thought that indie-tronica would be the unlikely accompaniment of the vampire-action saga? This juxtaposition has good intentions, like a sage trying to sway their younger sister from Justin Bieber to Feist. The soundtrack then implies that the people behind the movies are cooler than the one who wrote the books. But this still remind me of the syndrome that late 90’s alternative music that become devalued once they ally themselves to movies/TV shows about teen romances/angst. Alas. But once again, IT’S OVER!

Before even seeing Ingmar Bergman’s “The Seventh Seal,” we’re probably already aware of the iconic images of Death (Bengt Ekerot) extended, cloaked right arm and his game of chess with a knight named Antonius Block (Max von Sydow). These are the kind of scenes you save from the ending of a movie but Bergman makes the momentous meeting between Death and his challenger in the beginning. Like what can Bergman possibly give us for the rest of his movie’s 92-minute running time? How many times will Death and Antonius meet again, and how is it going to involve a coast village full of actors (Bibi Andersson and Nils Poppe) and the occasional blacksmith (Aki Fridell)  and witch (Maud Hansson)?

I must say that I’m more of a Bergman fan when his work was grounded in more recent settings as well as more contemporary emotional and psychological concerns. Although I’m not saying that his work before “Persona” had no merits. “The Virgin Spring” hit me hard but like it, “The Seventh Seal” have the same primitive, storybook-like air and pacing to it, the characters having the same abstract dimensions within a unique yet helplessly dated environment.

But while it might lack the kind of articulation of character that I’m used to in his work or in other works, it does show all of them within this cultural fabric that’s obsessed with death. It is the medieval Europe after all, after all, when people equally feared God and the Bubonic plague. And with the actors and fresco painters as characters in this movie we can see art making these zeitgeist-y questions more permanent for future generations to see and remember. Maybe it’s this distance between my culture and the one I’m watching, a distance I lamented at one point, comes to the movies benefits because contemporary eyes will always see something fresh with the time capsule what Bergman puts on-screen.

A Plague-filled country isn’t the best one that anyone could return to, especially Antonius who has just fought valiantly during the Crusades and has thus seen his own share of multiple deaths. One can read his return and his meeting with death with suspicion, the seemingly noble, well-intentioned man inadvertently bringing death wherever he goes. But we don’t necessarily have to blame colonialism or other countries for bringing death home. Death is inescapable.

Since we’re on the topic of culture and widespread death, notice Bergman’s sober perspective on how the characters form quick grudges and bonds. Men switch territories, actors change visions, women cheat on their lovers. Yes, sometimes, people and their trust for each other are their worst enemies, as Death consistently tricks Antonius with his disguises. And yes, it’s easy for other storytellers to blame other humans or the necessary evil of interpersonal relations on the deaths occurring during the movie’s time frame. But despite of its implications of human passiveness, Bergman lets these characters bond and forgive each other, setting necessary boundaries to keep the really bad people out. The movie also stars a younger, rougher Gunnar Bjornstrand as Antonius’ squire, belonging to a set of actors whom Bergman will continue to use. 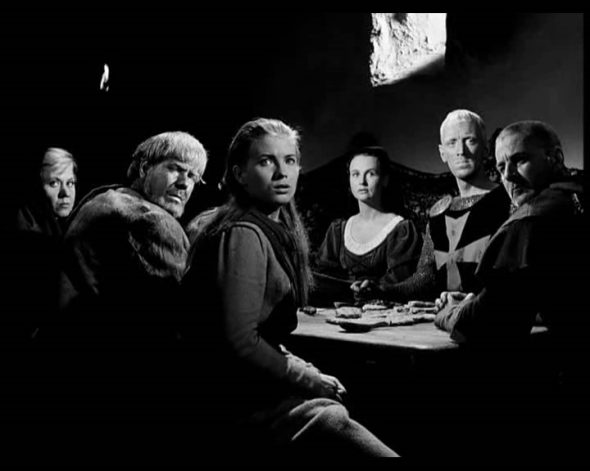