No, that’s not my best shot from Dog Day Afternoon, although that this movie begins by showing an image of a moving ship, among more b-roll, counts as guffaw-worthy to me. Because the rest of the movie presents the clashing that occurs during movement within claustrophobic surroundings, that this combination is more explosive than any kind of action in a city like 1970’s New York where something’s always happening. Sonny Wortzik (Al Pacino) and his accomplice Sal (John Cazale) planned a simple bank robbery in a branch in Brooklyn but one mistake after another turned it into barricaded televised street theatre. And we have to note that Sidney Lumet is the best person to document this story, one of the few who understood New York and its citizens’ contradictory cosmopolitan nature. Sonny is short, armed and scrappy and that’s not even where that list ends.

Nathaniel’s Hit Me With Your Best Shot series, just like movies themselves are visual  obviously, but Dog Day Afternoon is equally a sonic experience. Sonny and Moretti (Charles Durning) and all the others involved applauded or mocked by a pre-internet flash mob (they all suddenly appear as the cops set up the barricades, it’s hilarious). While rewatching this movie I wished that the players and the audience shared more screen time. And while Moretti was on his bullhorn, I wonder if a simple screen cap conveys that context that there’s an audience echoing his booming calls to Sonny. Can a screen cap let a neophyte understand that Sonny is waving to dozens of people with joy and not look like a deranged person? Can the breeze and the sweat give a hint that there are hundreds of eyes watching the two of them? 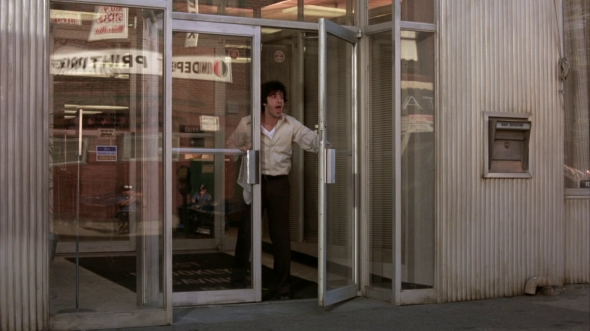 Sounds influence actions, like in the scene when cops try to break in through the windows of the back wall of the bank and the clusterfuck that happens afterwards. When he shoots the tellers inside get frantic and the people outside duck and scurry.

There are also moments that work as decrescendos here, the characters’ bellows and pleadings compensating for the lack of running around or gun pointing. No bullhorn needed, like the breeze or the light make these characters across the street from a bank look like magical vision for Sonny, begging for his sanity. And Sonny yells back, the best use of Pacno’s lung power because there’s a whole city block to fill with his voice.

But back to movement and energy, my favourite element of this movie encapsulated by the shots that I remember when this movie gets brought up in conversation. So much running in this movie, making for two of my best shots here.

Sonny trying to find out who the person is across the street who is realizing that a robbery is taking place. Moretti running either to his trigger happy cops to back away from Sonny or to running towards a random passerby who assaults Sonny. Moretti takes on a substitute father role for Sonny (Sonny’s real father, played by Dominic Chianese of Sopranos and Boardwalk Empire fame, is on the border of disowning his poverty-stricken son). Both surrogate father and son have trouble with the spaces they inhabit. The petulant child is moping inside while appeasing the female-dominated playground that he thinks he he’s entitled to. The father trying to make the son content while tugging on the strings of the forces of the outside world that he can barely control, which is, after all, what Sonny tragically struggles with.

This entry was posted on August 23, 2012 by paolocase. It was filed under Movies and was tagged with 1975, Al Pacino, best shot, Charles Durning, Dominic Chianese, John Cazale, Sidney Lumet.