In the Best Shot series The Film Experience’s Nathaniel Rogers encourages willing participants weekly with a new movie and a particular image (or set of images) within that stand out for us. Every movie has its challenges, this week’s selection being The Royal Tenenbaums being particularly daunting – I imagine any but two Wes Anderson with be equally difficult.

Which one that features a quirkily costumed character or occasional animal, setting or breaking the shot’s symmetry? Which segue shot showing a fictional book written by and/or about one or some of the characters? Which room or façade that Anderson himself meticulously planned and decorated, arguably trapping the movie’s said characters? 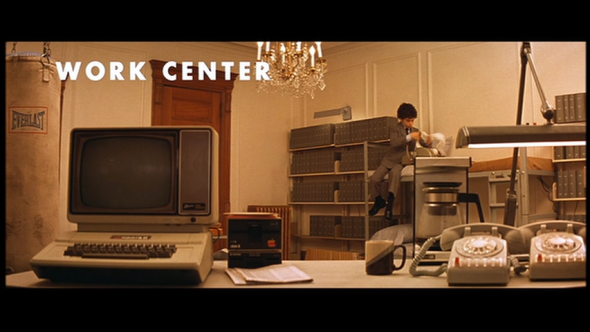 One of the rooms depicted is a product of Etheline Tenenbaum’s (Anjelica Huston) worldly education for her sons and daughter. There’s the one with younger Chas in his childhood room, dwarfed while sitting on a table near his shelves filled with monotonous finance books as large as his torso. Even if it’s one of the most monochromatic shots and mises-en-scene within Anderson’s oeuvre, it almost became my favourite shot because it’s the first one to crack me up.

And while we’re at it let me say that I’ve never seen this movie ever. I don’t the do the ‘let’s watch the director’s other movies’ kind of shit that other, better bloggers do before watching Moonrise Kingdom. I don’t subscribe to that time-consuming insanity because I have other time-consuming insanities. I didn’t even know if I was ever going to watch the latter at all, with my shifting mood and schedule.

Anyway! So yes, if you’re paying attention, I watched that before Tenenbaums. And I couldn’t shake what my favourite shot is in the former – Sam piercing Suzy’s earlobe – and I was thinking about how a man’s present work influences and/or mirrors his past, instead of the other way around. 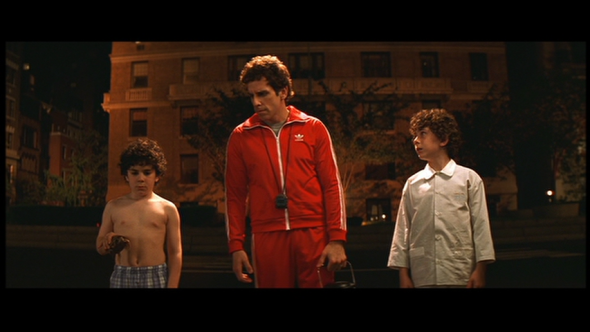 There were many candidates for this Moonrise-like shot, the ones featuring the tent being too obvious. There’s widower Chas (Ben Stiller) dragging his kids Ari and Uzi out to a fire drill. But there are more moments like that when the main conflict surfaces, as the movie belongs to a sub-subgenre of family reunion dramedy. It’s no longer just Chas and his two sons, it’s the three of them and the rest of the family, particularly the dynamic between the three guys and their boor-in-a-suit grandfather Royal Tenenbaum (Gene Hackman). The rotten dad suddenly wants to change.

If I kept my Sociology of the the Family texts – ugh – I can tell you exactly what they say about grandfathers and grandparents’ role outside the nuclear family but it could be one of two ways. One is to instill traditional values to the children that the latter’s parents forego or rebel from, which Royal doesn’t do. The other is to be the lax influence in those children’s lives, which is a roundabout way of explaining why my best shots belong within this glorious montage of Royal and the kids making harmless mayhem in Upper West Side.

I don’t participate at this kind of activity but I’m of a child siring age. So when I look at children in the movies I think of the fun times I had as a child that I wouldn’t let my future kids do because they’re dangerous. Or realizing how fucked up these activities were in hindsight, like running across incoming traffic! But it’s this complicit nature within childhood, the bleeding ears and scraped knees and the pain being a temporary part of the fun. Kids egg each other on to this as much as adults do to kids. Even the passive aggressiveness that Chas and Royal inflict on other characters have traces of this behaviour.

Besides, Royal eventually jumps to this regressive state caused by the foresight that time is fleeting, when he no longer gives a fuck and wants to have the same fun as he did as kid. He’s the truth-teller within a family of uptight, stunted intellectuals. And even if they don’t take place within the doll house rooms or 388 Archer Avenue, Anderson unleashing his characters out to the chaos of New York, they still engender the director’s glowing childlike ethos.

This entry was posted on July 25, 2012 by paolocase. It was filed under Movies and was tagged with Anjelica Huston, Ben Stiller, best shot, Gene Hackman, Wes Anderson.