BS and Beauty in “The Raid”

The characters’ bodies’ tenacity in Gareth Huw Evans’ The Raid makes me wonder many things, among them, ‘Sure that one guy plays with a punching bag in the morning but does he also eat a healthy breakfast?’ Or maybe what re-energizes the intruding, wounded youngish policemen is the drug room that they eventually reach after elbowing a few gang members and violently losing men of their own. The white sand being kicked up in the air serves as some temporary sustenance. I’m not even sure if their near-invincible physical states can be criticized since the movie just covers an hour and a half of the titular police assignment, although movies apparently are supposed cover a longer time period than the minutes that are used to portray them.

I also found the cinematography to be problematic, reminiscent of wet wood, peeling drywall and spare lighting that, we imagine, are the visual qualities of a run-down urban drug den. There are some digital simulations of bullets coming out of illegal modern rifles. As the cops enter further into the building’s higher floors, they’re depicted through medium shots of their torsos. But I got over that eventually, as the camera gets brighter and moves up and sometimes back to show the combatants’ faces and arms and legs. All that fighting makes the cops lose many men on their team but the thugs make deliberate mistakes that cause the cops to get a Pyrrhic victory but really, would you have it any other way?

Perhaps what’s more irksome to this movie’s detractors is the back story of one of the policemen, Rama (Iko Uwais), the one doing the dawn time boxing preparation. In between sit-ups we also see him kissing his pregnant wife who wakes up to greet him goodbye, optimistic despite risks. Some consider that his wife’s image jolts him as he stumbles through the complex’s hall ways. Eventually I haven’t been as warm towards the film, since it has its detractors and genre films will never be perfect. But here’s how I see it – the other policemen have similar domestic lives, Rama recedes into his police unit and he emerges not because of his pregnant wife but because he’s an excellent martial artist who defeats his hoodlum enemies and happens to have a baby on the way. 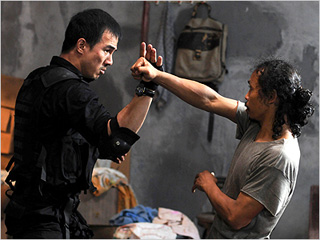 Pardon me if I try to find a national metaphor within this movie, a straight up punch-and-kick flick ruined by a ghettoizing lens. It’s in my nature to over-think and be pretentious. But think about it – the cops are indistinguishable from first-world SWAT units except for their faces, also framed by near-bald or crew-cut heads. Their weapons are supposedly state of the art, contained with their deceptively bulky uniforms. Their mission is to civilize a place riddled with drugs and other anti-social behaviour, occasionally impeding on the rights of the decent people who have no other choice.

The gang members on the other hand have longer hair, more colourful and less professional clothes. They brandish mostly homemade swords or large versions of knives reminiscent of traditional weapons. There’s also one henchman who prefers to fight with his bare hands, an excuse to choreograph the greatest martial arts sequences rapidly caught on camera. They protect their fortress not just with this carelessly planned police raid but from rival gangs, like tribal warfare within one side deviating from the law. Both camps aren’t within perfect opposition, though, as the hoodlums’ illegally obtained machine guns, the surveillance technology, the traitor playing both sides, the Traffic-like revelation that the police’s presence is to help another gang’s corruption. What’s also complicating the binary is Rama, a good Muslim and we can interpret his religion as either one that’s victimized or one that conquers.

But that’s all mind fodder for later, what got me while watching the movie are the raiders’ faces. I’m not usually into Asian guys but it’s always good to remember what stimulated me when I was younger. Even now, living in a multicultural country, I still get a glimpse of those kind of faces – a narrow beady eyes giving out a piercing stare that owns the room, that stare of a warrior buried deep inside poverty or civilized repression. Sometimes they have bushy eyebrows like Jaka, a trait from our common ancestors in the mainland before moving further into the islands. At other times, to the audience’s advantage, they have Rama’s near-perfect Roman symmetry, covered in darker than olive skin perceived as perfection in our shared childhood mythologies. It’s probably indulgent of me, and I’ll admit that it’s careless to owe Rama’s survival because he has the looks of the movie star, rising above lesser prototypes. He doesn’t get to make it because of those aspects, it’s also because of his fucking fists. 4/5