A dirty-mouthed, homophobic high school kid named Costa talks directly to the video cam in front of him about the titular Project X, when he’s throwing what he hopes is ‘the best house party ever’ for his introverted, lanky friend Thomas Kob (Thomas Mann).

The camera, held by a conspicuous goth, follows both kids as well as every character he comes across, like Thomas’ parents who, going out-of-town, are confident that no house party will happen because he’s a ‘loser.’ But the turn of events are going to prove these adults wrong, because as the kids do their alcohol shopping they learn that Miles Teller is going too.

For some reason youths will go to any party before asking who is organizing or who it’s for, which I actually like because these children, celebrating and illegally drinking together, are less clique-y than my generation ever was. There are one or two kids, including the goth and the Thomas and Costa’s overweight and more awkward friend J.B., who are outcasts but they’re still allowed in.

When they actually see the celebrant, they stop the Muzak blaring from state of the art speakers – the great soundtrack includes Animal Collective, which, thank you – sing him the birthday song. It’s that one decrescendo after a series of well choreographed scenes going off in different parts of the block. It’s the right amount of organized chaos. 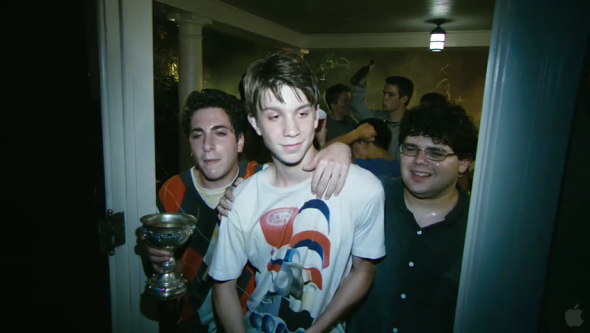 And when the music goes back on, we see people having a lot of crass fun and even if I watched this during a sober-timed matinée, I couldn’t help but root for the kid and the booze fest around him. It’s nice to see him transform from a ‘nobody’ to someone to cheats on his childhood sweetheart with some new bimbo. But in any circumstances, the movie’s music and the smoke and drug haze makes its audiences join in on the fun. Nobody wants to be a party pooper.

But the Todd Phillips and Joel Silver produced and Nima Nourizadeh directed party comedy begins in crass-ness and ends there with a riot breaking out. There’s just too much misinformation about collective outbursts for me that the movie’s association of the act with the ‘fight for your right to party’ generation seems condescending, vapid and vulgar. It’s ends up saying that kids haven’t evolved or have no thinking, as if all we or the young ones do is riot, destroy and have tantrums when we don’t get what we want. 1.5/5

This entry was posted on March 3, 2012 by paolocase. It was filed under Movies and was tagged with 2012, comedy, Joel Silver, Miles Teller, Thomas Mann, Todd Phillips, youths.