I’ve never wanted to scrub a surface shown on-screen until I’ve seen this, and I meant that in a good way. 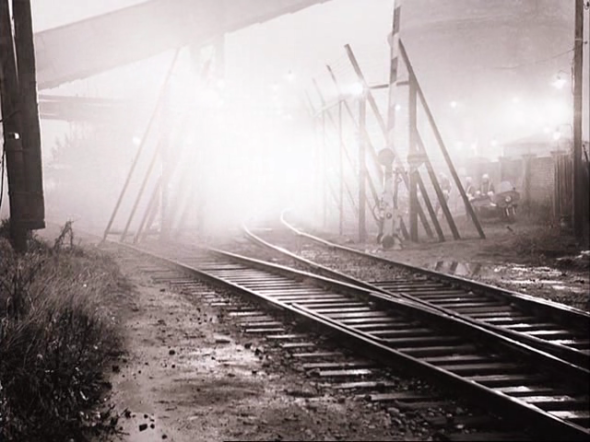 The man who programmed the TIFF series on Russian Sci-Fi warned us that Andrei Tarkovsky‘s Stalker, adapted from Arkady and Boris Strugatzky’s novel called ”The Picnic at a Roadside,” was ‘accidentally’ filmed with expired stock, giving it that look as if he shot the movie in mercury, which captures light differently.

What he didn’t tell us is that makes way for normal colour, welcomed after the delightful yet rusty cinematography of the earlier scenes. This transition thus reminds me of Victor Fleming’s The Wizard of Oz which is profound until I realize that I’m not the first person to make the comparison. Here’s Jose with more of that.

But one of the trespassers of this Russian real estate – cordoned off after a meteorite attack like Tunguska – calls it home. We can give that word some political meaning. The characters have nicknames instead of names. The group’s mercurial guide, the Stalker (Aleksandr Kaidanovsky), help his new tourists the Writer (Anatoly Solonitsyn) and the Professor (Nikolai Grinko) to find what they need to flourish in their fields. But their visit can be seen as reclaiming the happiness the government that has taken away what has once been theirs. Whether I’m off-base of or not, this land, called The Zone, has already been eerie in black and white, with “Life After People” like flowers showing up in ruins.

In colour it’s a totally different animal. The Zone makes the urbanite characters question the flowers lacking smell, the sand dunes, and a self-sufficient wild dog, if those creatures are what nature is like at all. The strange this is that the camera during the movie’s black and white portions look unstable while the compositions in the Zone make more sense, only off-centre in content.

In the threshold of the room within The Zone that gives its visitors happiness, the reason Writer and Professor are there in the first place, they decide to sabotage their mission, making Stalker go apeshit. A part of me said ‘Be a man, go in there and fail properly!’ Russian…fatalist…defeatism. But we watch these anguished characters for a longer period after their failure, determined that advertised happiness isn’t in the room across them.

Fifteen minutes, a few scenes, enough time for me to reacquaint myself with that part of the psyche that stops before the top rung in the ladder. How admirable it is to show the realism within myth-breaking. When they return to their city the Stalker is bedridden and feverish, still struggling to take care of her daughter Monkey (Natasha Abramova). Destroying a man’s belief system – despite the political symbolism above – is devastating, handled thus than the preceding version of the story. That home is forever lost.